Review: Get cultured at Hamtramck's Sheeba 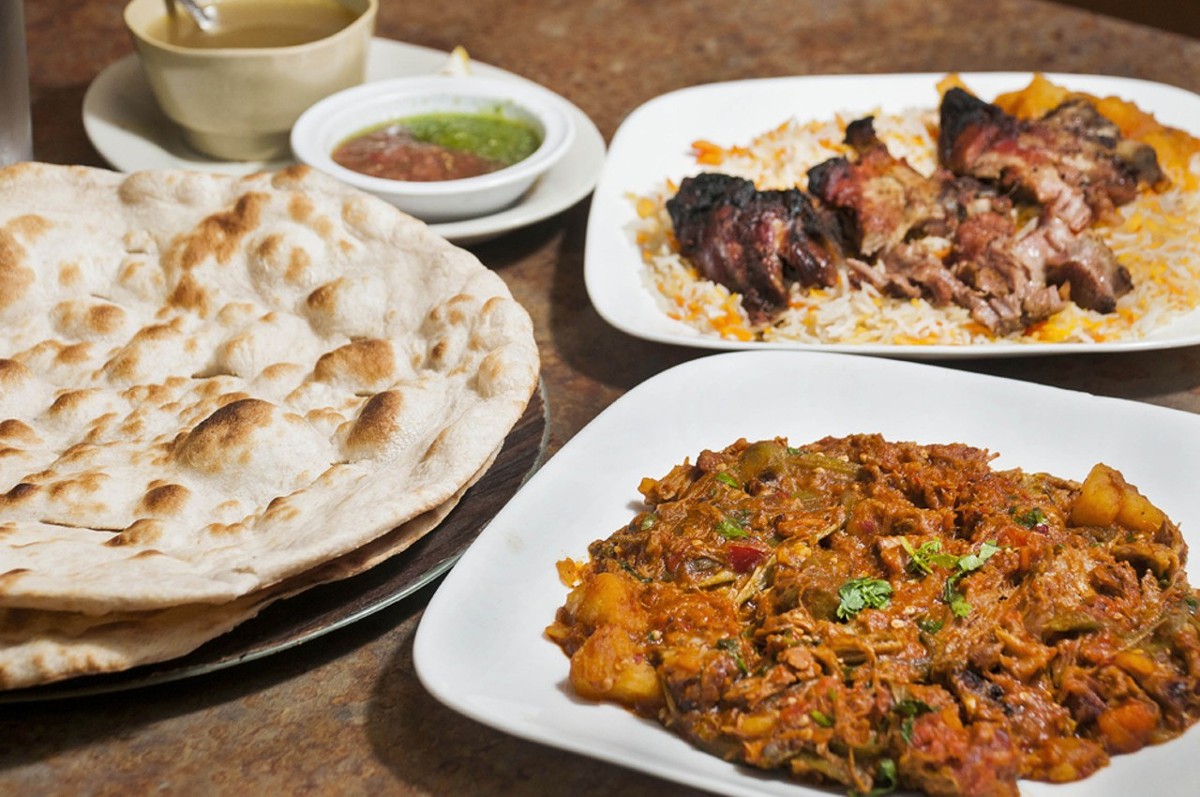 Back in the olden days, if you went to a restaurant whose ethnicity you were not, the servers might warn you away from certain dishes. That stopped happening a while ago, as more white-bread people started seeking out interesting cuisines and small restaurant owners began to look for a larger audience.

So it was a throwback the other night, when I ordered a "cultural platter" at Sheeba in Hamtramck, and the server said, "That's just for Yemeni people."

Turns out he was half right, but still.

If my read over just two visits is correct, Sheeba serves a mainly Arabic-speaking clientele, and servers don't normally need a lot of English. We sometimes had to give up finding out just what was in a dish, and had to make multiple requests before certain items would be delivered. It seemed like Sheeba was the less-modernized alternative to the larger Yemen Cafe just two doors down, which brightened up considerably when it moved from its former hole-in-the-wall space last year. Neon, no less.

Those who've been going to the Yemen Cafe or to Sheeba for a while are well aware of how different Yemeni cuisine is from the Lebanese fare we've grown up on. (Look at a map; the two countries are 1,500 miles apart.)

For one thing, Sheeba hasn't moved away from traditional lamb to the cheaper beef you find in many a Lebanese restaurant. We got three lamb chops for $13, what a deal. If you order in advance, you can get a whole stuffed baby lamb.

For another thing, you'll find unfamiliar dishes like aseed, muishakal, and seltah, and a fantastic lamb broth.

Let's start with that. The menu promises that entrées come with a choice of rice or hummus and soup or salad. In practice, we found what was brought to the table somewhat random, with extra food offered for free on both our visits.

We loved the simple but rich lamb broth, with a few onions. (And maybe a hint of cloves?) It seemed even more soul-nourishing than chicken broth. A deconstructed salad of tomatoes and iceberg, on the other hand, came with a tasteless thick yellow dressing. Hummus was a bit bland but decorated with dots of tart olive oil and a heap of tomatoes and onions in the middle. It's worth it to have your pita crisped on the tandoor, for an extra buck that may or may not appear on your bill.

Rice is beautiful, glistening, and ultra-tasty, with flecks of orange (carrots?) and gold (saffron?) and allspice.

The Sheeba Cocktail is rather spectacular, a brilliant gold swirled with red in an incompletely blended smoothie where mango and banana flavors alternate. Banana smoothies and carrot and orange juice are also possible.

But you're probably wondering about that mysterious cultural platter I was warned off of. Aseed is available just on weekends (at least that's what it says in print) and is translated as "dumplings." It's a thick white-flour dough that takes a lot of kneading and produces a stiff white mound, stiffer than mashed potatoes. The Sheeba chefs make an indentation in this for a salty gravy, and serve it with roast lamb on the bone (haneeth), so tender it can be pulled apart with a fork. With just the right amount of melty fat, the lamb was the part of the dish worth paying for; it seems every culture has its super-bland comfort food (e.g., dosas, Wonder Bread).

Another cultural platter is seltah (or saltah), "a boiling clay tray" which is served in a clay pot. Remove the contents to your plate, or I promise you the contents will not cool down till after your companions are done eating. I loved this thick stew, with zucchini, tomatoes, and potatoes infused with lamb broth (best guess), and, according to some recipes, fenugreek. A vegetable stew, muishakal, was frankly less interesting, but it can be made with lamb or chicken. Another stew, lamb agdah, used okra, red peppers, potatoes, and carrots, with hunks of lamb still on the bone.

A companion ordered the familiar shish tawook and it was the usual: chunks of dryish chicken, green peppers, tomatoes, and onions on a bed of rice. Those bargain lamb chops were overcooked by some standards, but I savored their charred exterior. They came with rice and a potato.

Breakfast can be foul mudamas (fava beans) or fassolia (white beans), or eggs, hummus or baba ghanoush. Or liver.

At dessert time, four people shared a big plate of masoob: mashed bananas and pita with cream and honey. The pita crumbs created an oatmeal-like texture, and it had a wholesome, nursery quality — more comfort food.

As I said, service at Sheeba may not be what you're used to. Used dishes aren't removed. The language barrier is real, though not insurmountable. On a return visit I'd focus on the lamb: roasted (haneeth) or in one of the several stews. I'd leave the aseed to those who have childhood memories of it, and the chicken to... well, I don't know why anyone would order chicken here.