Seven trends in LA dining that need to happen in Detroit

These types of lists float around all over the Internet. And it's usually topped with obvious fast food chains that the author loved in one place they lived but no longer get in their new home. This is not such a list. We will not tell you that California-based In-N-Out Burger needs to come to Detroit. That's just not true. We've got some of the best burgers around. Nor will we venture to say that the Mexican or Asian cuisine popular in Los Angeles needs to make an appearance here. Yes, the West Coast arguably has the very best in both culinary traditions. But we don't want to dis' all the spots in Metro Detroit that are doing the thing to bring those flavors here.

No, instead, we're focusing on some of the things in Los Angeles dining that you might not already be aware of, trends that are inspired by healthy eating habits, the region's long tradition in street food and our shared experience living in a sprawling metropolis, where torturous commuting is inevitable. True, some of these have logistical issues (we don't exactly have an abundance of fresh citrus or avocados, for example). But in a perfect world, here are some of the things we think would find a welcome place ind Detroit dining, inspired by a recent trek to our homeland of La La Land.

Yelp
Pictured here, Frutería Huerta in the LA suburb of Alhambra.
This translates to juice bar in Spanish and in LA's many, many barrios the fruterías are an oasis for freshly-squeezed jugos de orange, carrot, jicama, pineapple, mango and other citrus and tropical fruits. They serve as elixirs when you're feeling under the weather. And a large cup of the stuff is far more reasonably priced than anything we would find at Drought, the $12-a-bottle Detroit-based juicer that's had a lock on the market as of late. Plus, these places are especially nice during hot, muggy Detroit summers, as many feature wild cold or slushy mixes, like chamangos, which feature mango, chamoy salsa, chili powder and lime. Truly a sweet and spicy paradise. We know these types of spots have a strong showing in Southwest and Down River, but let's integrate this into the rest of Metro Detroit.

2) Avocado Toast - This is a staple on menus all over LA. And for good reason, it's healthy, fulfilling and is perfect for breakfast, lunch or dinner. We tried a heavenly avocado toast at French bistro-inspired Mama Shelter at Selma and Wilcox in Hollywood. A buttery avocado spread over hard crust bread and sprinkled with roasted pepitas, and you'll never question whether Mama loves you again.

3) The French Dip - The French Dip, whose provenance originates in Los Angeles (depending on who you ask it was either invented at Phillipe the Original next to Union Station or Cole's Pacific Electric Buffet in downtown), is already a common menu item in delis across the country. We would venture to argue that Detroit would welcome a spot that solely serves the stuff. Phillipe (our favorite), simply-designed and consisting of not much more than a deli case and rows of counters and stools where hungry Angelenos can scarf down their sammies. Reminds us an awful lot of like your typical classic Coney (maybe Lafayette or Duly's). And just imagine walking in on a cold, winter's day, to enjoy thinly-sliced cuts of roast beef, dipped in warm, au jus and all tucked into a crusty French roll. 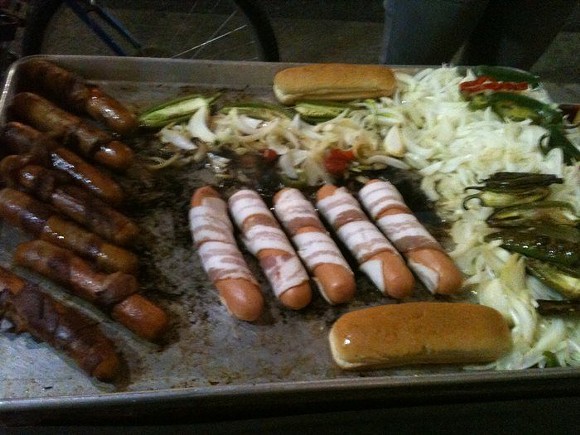 Yelp
Danger Dogs, Los Angeles
It's 2 a.m. and the club just got out. You're drunk and hungry and need something to soak up that booze, pronto. Sure a Coney would do the trick. But sometimes you can't wait to drive to the nearest one and either pick up at the drive-thru and eat it at home or dine inside the place. That's where the bacon-wrapped hot dog comes into play. The makers of these concoctions stand mere feet outside of countless bars and clubs across LA, waiting for customers to literally stumble the few steps their way. Grilled right in front you and topped with caramelized onions, they're among the original LA street foods that would serve as convenient alternatives to the Coney.

5) UberEats - We spotted this nifty feature when fetching a ride on the ride share app. Instead of hailing a car, Angelenos have the option to request delivery from any number of local eateries. Sounds perfect for Detroiters who are snowed in during a Winter Vortex and the fridge is running low on sustenance.

6) Lemonade - Described as "part lemonade stand, part grade-school cafeteria," this growing chain speaks to So Cal's obsession with healthful eating. We began hearing about this place after we moved away from California in 2009. Critically acclaimed by all sorts of food publications, it features a bountiful array of freshly-made salads, sandwiches, soups and decadent desserts - not to mention the best blood orange lemonade you'll ever have. As more Detroiters are leaning toward conscientious diets, we say bring on the Lemonade to Detroit.

7) Grand Central MarketAs reported by Eater Detroit's Brenna Houck earlier this month, Lafayette Park is poised to add the Busy Bee Food Hall, a sweeping cafeteria to feature an estimated 12 restaurants, plus food vendors at Gratiot and Russell. This would no doubt be a huge addition to the neighborhood, which borders Eastern Market. But as developers are planning this promising project, they may want to step inside the renovated Grand Central Market that sits at the foot of Angel's Flight in downtown LA. Situated in the landmark Homer Laughlin Building, this nearly century-old community marketplace has served countless hungry Angelenos - whether they're in search for a plate of tacos al pastor, a heaping serving of chop suey or a bag of fresh fruit. The space underwent a sweeping overhaul in the last few years, adding artisan cheese mongers, craft beers and wines and a kitschy breakfast spot called Eggslut to the already thriving Latino, Asian, Jewish and produce stalls. If Busy Bee Food Hall can capture that essence, we predict the new develop will be an overwhelming success.