Co-owner Chris Best built out the bar — called Bar Hop — on a small slice of private property at the Rust Belt's doorway facing the Nine Mile and Woodward intersection. The area used to hold the Old Navy tower that was torn down long ago.

Best filled the 1,000-square-foot-patio with custom furniture and a bar he built out of barn timbers from an old barn in Almont, Michigan. Above the space, he connected repurposed gas pipes from which he's stringing four varieties of hop vines, hence the name Bar Hop. Best and wife and co-owner Tiffany Best, who used to design landscape, then stocked the area with custom white pottery pieces filled with a succulents and flowers.

"It's got our juxtaposition of industry, steel, and metal next to living things that are coming from that," Chris Best tells Metro Times.

When it opens during Ferndale Pride on the weekend of June 2, customers will find a range of craft beer in bottles and cans; four craft batch cocktails and mocktails on tap; and boozy popsicles. There's also the option of adding a keg of beer, Best says.

Courtesy photo
Notably, the bar holds its own auxiliary liquor license and will operate semi-independently of the Rust Belt's indoor bar, event space, and market. The indoor bar is only open to the public during market hours, which are typically over by 7 p.m. Best says Bar Hop will be open on weekend evenings until 2 a.m. and sometimes during the week, weather permitting.

"It gives the freedom to act like a regular bar," Best says.

He adds that the lack of green space in downtown Ferndale motivated them to design Bar Hop.

"It's a green, botanical experience. Downtown Ferndale doesn't have a lot going on in terms of green space. Not not a lot of trees, so that's the idea — to make it a relaxing, comfy, and inviting place, but with the Rust Belt vibe." 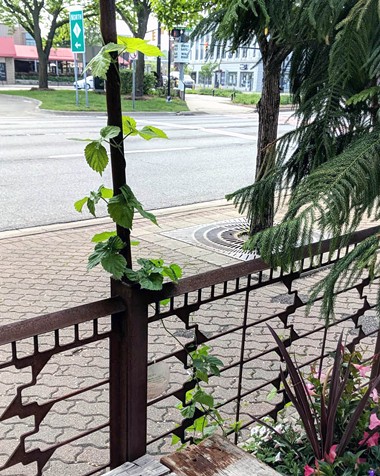 Courtesy photo
Hops will be strung around the repurposed gas pipes.