Review: You can DIY at Southfield’s Daebak Korean BBQ 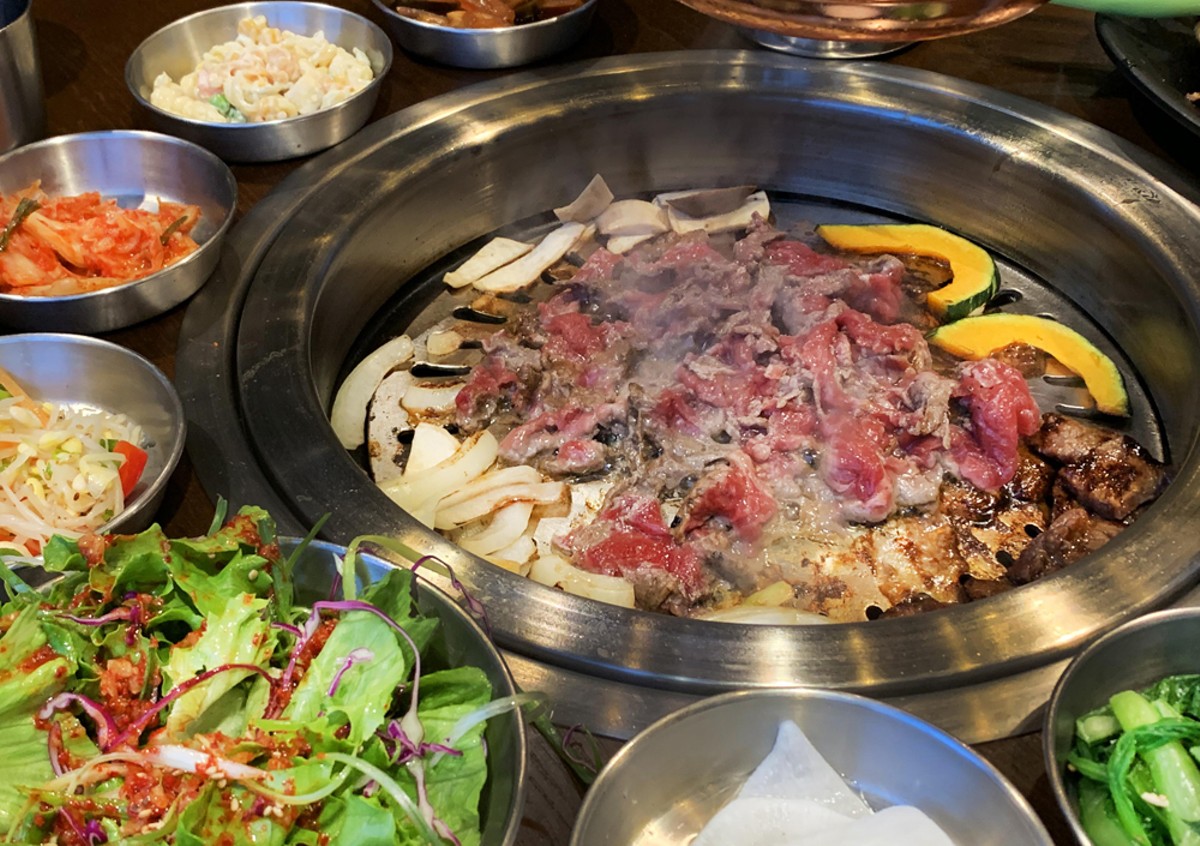 A big part of the fun at Daebak is that it's a cook-your-own, cook-as-you-go, share-all-the-dishes way to eat. I suppose a couple could order their meats separately and draw an imaginary line down the center of the in-table grill, each using half, but they would be silly. Better to let everyone taste some of everything, which is how the rest of the menu is set up, too.

The fact that the big heaps of meat can't all be grilled at once slows the meal down, and it's entertaining to cook your own, since the chore is far from onerous.

Daebak is all barbecue all the time. Every table is outfitted with a stainless steel grill in the middle and an elegant, silent exhaust fan that hangs down, tube-like and unobtrusive, from above. Diners are brought big piles of raw pork, beef, or chicken, a pair of the world's sharpest scissors, and some tongs. They can get a demo from an attentive server or dive right in.

Each order comes with three dipping sauces, a simple salad with a world-class sesame-oil dressing and six cold sides. If you order a combination platter, you'll get a dish of steamed eggs and a bowl of soup as well.

Daebak is one of three Korean restaurants in Southfield's New Seoul Plaza, owned by Sarah Yi. The others are Jinji, with a broader menu, and Myomee, for coffee and dessert.

At the outside door of the complex you're greeted by two unintentionally droll stone lions — these kings of beasts are bantams. Inside, at Daebak itself, the entry is graced by a stylish cutout of a cow-pig-chicken tower, each standing on the other's back, like the Bremen Town musicians. The room itself is spare, with lots of light.

It looked like a giant amount, but meat shrinks, and we ate almost all of it. Each dish was at least a bit spicy, with the bulgogi the plainest. The pork was sweetish and the short ribs, perhaps because they were thicker, retained the most flavor. The chicken marinade was decidedly sesame. Each of the dipping sauces — sesame oil, a sweet barbecue sauce, and soybean paste — felt equally at home with each meat. You're given a head of romaine if you want to wrap the meat in a leaf, and raw onions and winter squash to grill.

As a starter we ordered "corn cheese," said to be popular in South Korea now. It feels quite un-Asian — creamy, sweet and dairy, with a lot of mozzarella and the corn charred and practically sugary. But I loved it, and it was only $5, the cheapest starter along with some creditable deep-fried dumplings. A seafood scallion pancake will set you back $14. The steamed eggs that come with the combo are ethereally light but bland, and the soybean soup is sourish.

The sides that come with every meal vary slightly but are bound to include bean sprouts, kimchi, pasta salad, pickled jalapeños and very thin giant radish slices. I thought pasta salad was an odd choice, but it was enlivened by chunks of apple.

I hesitantly tried an iCing Korean grapefruit wine because it looked to be the least sweet wine on offer, and it was mild, smooth, and drinkable, at 4 percent alcohol. Others were black raspberry and white grape. There's also a carbonated semi-sweet unfiltered rice wine, makgeolli, "Korea's oldest alcoholic beverage," in regular and peach flavors. Such a wine didn't work well with the food, of course; better to try the sizable beer list, including Korean and Japanese brands. I ordered Hite, the best-selling beer in Korea, and I knew before Wiki-ing that it was a Budweiser knock-off.

The Korean national liquor is soju, clear and made from rice, potatoes, sweet potatoes, wheat or barley. Daebak has it in ABVs ranging up to 32 percent and in flavors such as apple and strawberry. Sounds like Boone's Farm to me, but I didn't try it.

Another night, four of us each tried ordering a la carte from a menu that includes beef tongue and four cuts of Angus ribs (the a la carte dishes come with the salad and six sides, too). We shared a tray of beautifully thin-sliced and rolled Piedmontese beef brisket, quite lean, two kinds of pork belly, thick and thin, and pork jowl. Each tray included a cube of fat to grease the grill with first, but there was plenty of fat in the pork without it. The thicker cuts kept their flavor better, and to my surprise the jowl was best of all.

For the vegetarian who is dragged against his or her will to Daebak, there's a "Beyond Sausage" Brat and "assorted vegetables that are grown to be grilled."

We stopped by Myomee on the way out and bought a soft peanut-studded bun with a peanut-flavored cream filling — again, not a combination you'd associate with the East, but doing reasonable duty for dessert.