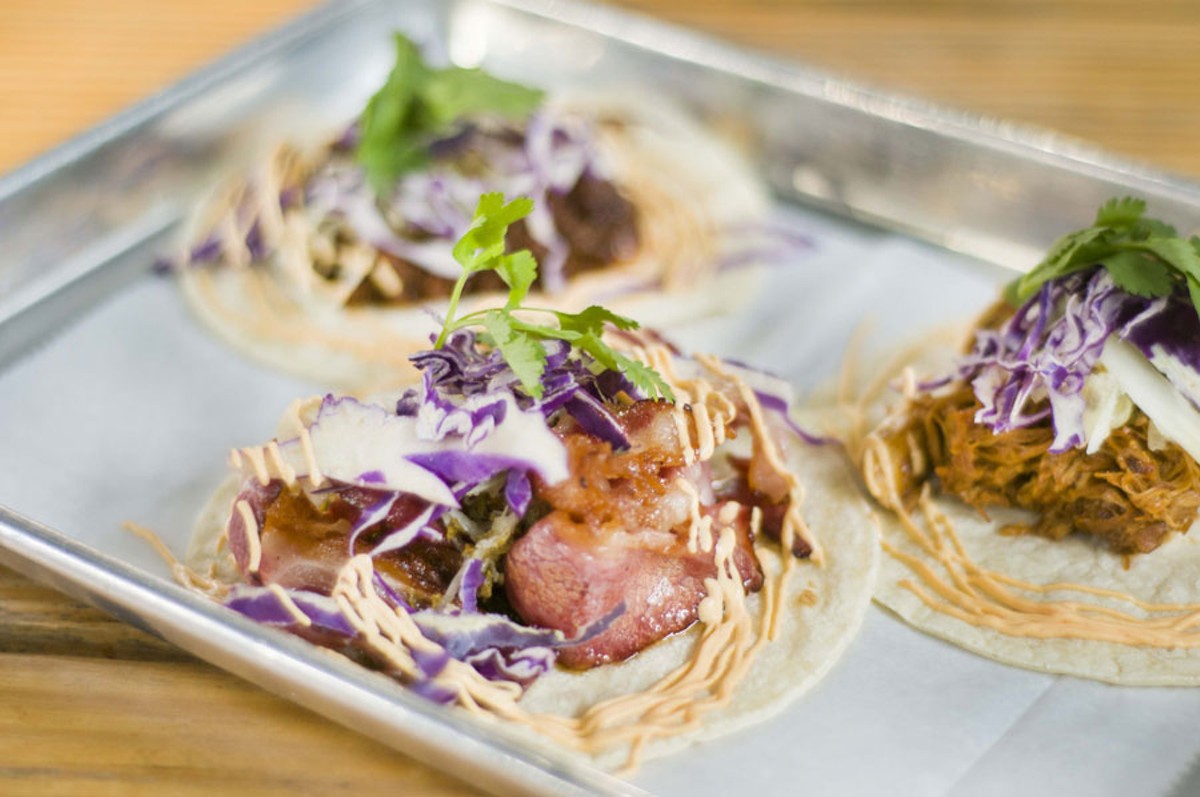 Detroit Shipping Company is good for groups who don't agree. Should we eat Thai, Mexican, or Caribbean? Or should we just drink? Do we want to be indoors or out? Would some of us like to visit an art gallery while we're at it, while the rest of us look at the game on TV?

The Shipping Company can accommodate your disparate desires, with its three kitchens (thus far) arranged around a big communal space and its two bars. Its gallery shows local artists, rotating every month or so. A beer garden is under a tent with heaters and fire pits (not functioning yet as of late November). Our querulous group can split up for ordering food and come back together to eat it.

The bars are under the oversight of the Shipping Company partners, while each restaurant operates its own kitchen. Operations partner Petro Drakopoulos said the theme of the long beer list is "approachable," with something both for beer snobs and for those who "want that pre-game Labatt Blue."

You'll find a Revolution Anti-Hero IPA and a Short's Space Rock pale ale, to name just a couple from a list that is 61 percent Michigan. Estrella Jalisco is the only non-U.S. brew. Drakopoulos said seasonal beers have done well, like a summertime Short's shandy and, recently, Blake's Flannel Mouth and El Chavo hard ciders, both from Armada, the latter containing habaneros and mangos as well as apples. And yes, for fall there had to be a Screamin' Pumpkin Ale. There's always a $3 bartender's choice "mystery beer," too.

Most of these should go just fine with Drakopoulos's take on Mexican, at Brujo; he is the chef-owner there (as well as at gastropub Republica in Berkley). He started Brujo with "fine-dining tacos," he said, but realized after two weeks that people wanted "more approachable." There's that word again, which can mean "dumbed down," but doesn't here.

Brujo ("witch") is halal; Drakopoulos' partners are Bengali Muslims from Hamtramck — "and foodies," he adds. Mexicans eat a lot of pork, so it was a challenge to work around that. You'll see more lamb at Brujo than in the whole state of Jalisco, I'll wager. "Approachable nontraditional," says the chef.

The three-for-$13 tacos are large, though they use just one corn tortilla each, so they're quite a mess to eat. Plastic forks are provided. I liked best the beef belly, which is bacon-adjacent. BBQ chicken is not super spicy, though it uses banana peppers; lamb chorizo tastes too much like chili powder for me. All are generous with the red cabbage. There's always a "seasonal veg" option, such as wild mushroom and bean.

Perhaps the best buy and most creative nosh are the montaditos, which are tapas: a little slice of baguette with something interesting on top. I loved the roasted acorn squash, which is warm, cold, and sweet, topped with grape-and-butter jelly and a roasted cocoa-condensed milk drizzle. I could have eaten more of these. The spicy goat cheese is hot with a jardiniere sauce of carrots, jalapeños, and cauliflower in olive oil. The avocado montadito is of course rich and creamy, with Parmesan and a mild tomato salsa. The fourth option is a miniature Greek salad.

Specials have included wild scallop ceviche — an original mix with tomatoes, onions, yellow peppers, cilantro, and avocado, on a crisp taco with crema drizzles. This was satisfying, if summery. Another night a giant "torta burger" was made of beef and lamb, with neon-yellow pickled peppers on a delicious torta bun that stood up to the juices far better than any American burger bun. Again, the flavor dampened my enthusiasm for this one.

Readers, I fell down on the job by not sampling the canned tapas. I know they are trendy, but I can't see going to a restaurant, even a food stall, for something straight out of a can, especially octopus or calamari. Watch how nearby tapas joint La Feria does calamari. It's worth the effort.

Drinks, if you're not hitting the bar, are Topo mineral water or Mexican Coke.

The restaurants of the Shipping Co. served 200 needy people from their kitchens on Thanksgiving, inviting White Castle to give away sliders too — again, keeping it approachable.

I have to mention that in the neighboring parking lot there's the silliest valet parking ever, for $10. The valet lot is slap up against the building. So you get out of your car and the driver moves it a few yards for you, the new Queen of England. And this is while free parking is available behind the building or on the street. Restaurant customers of Detroit, show 'em you are made of sterner stuff.