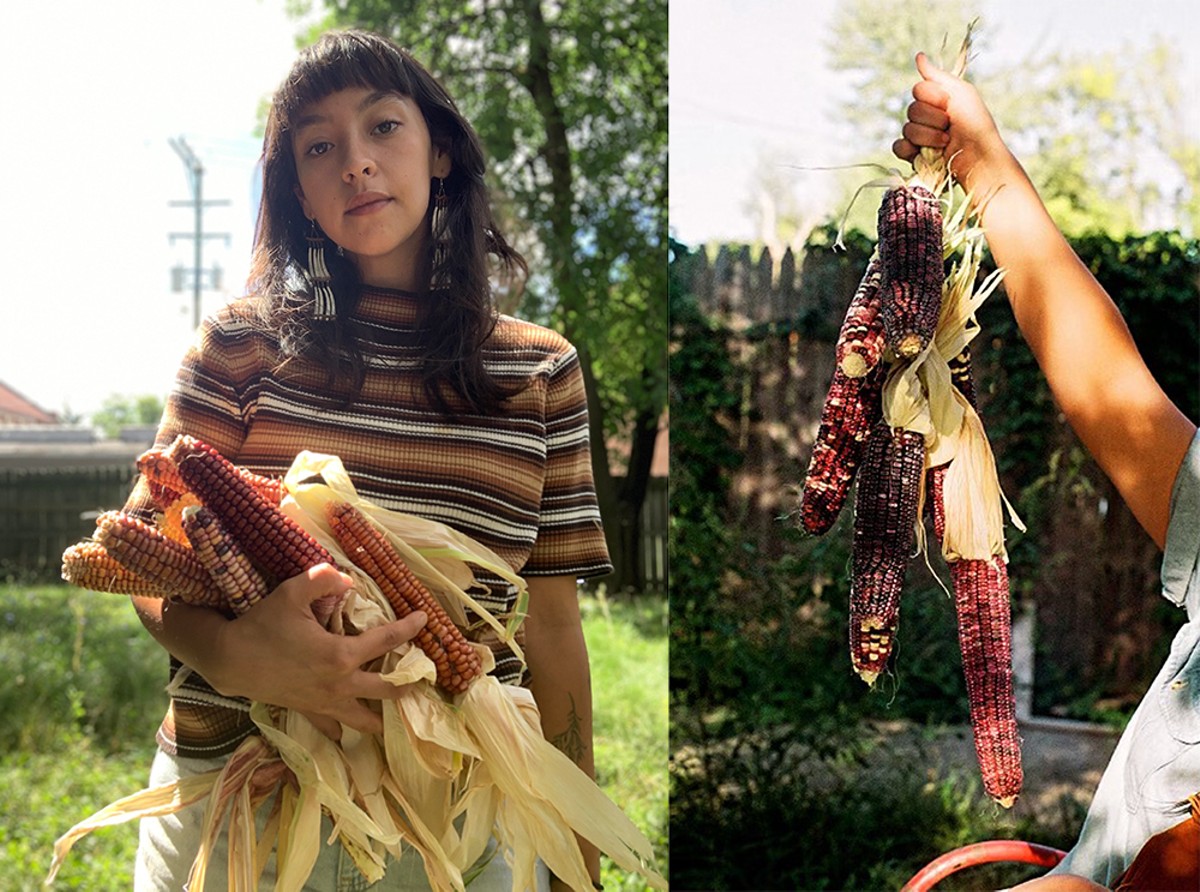 I first meet Kirsten Kirby Shoote on the shores of Lake Michigan on a warm, sunny day. Her hands are closed around something, silhouetted against the waves.

As she gently unwraps her fingers, I see that it's a corn cob — crimson and yellow, colors dancing in the gleaming sunlight.

The beauty of these little seeds captivates my eyes as she illustrates the importance of this heirloom corn, and her relationship with it. They came from a corn called Cherokee White Eagle, and traveled through the trust of other seed keepers like Shoote.

"We're going back to our original agreements with the seeds," says Shoote, a Tlingit food activist, chef, and urban farmer from Chinook territory on the West Coast.

According to Shoote, for a long time it wasn't safe for these seeds to be planted. Historically, it was a struggle for Indigenous Peoples to keep their traditional foods because of forceful removal onto barren reservation lands and genocidal policies by the U.S. government, such as the Indian Removal Act. So the ancestors carried them, and hid them until it was safe again to be planted.

"That time is now", she states.

Shoote grew up in an urban setting in Chinook territory, known as Portland, removed from her culture, which included her relationship with the land, and the connection to her ancestors.

With a one-way ticket in hand, and no formal plan, she made the decision to move across the country to Waawiyaataanong (Detroit) in the winter of 2015. She says she was hurting after the death of her father, and felt a lot of sadness because the heart disease that led to his passing was preventable

Shoote says that she didn't feel very brave for leaving, she was just in pain and needed to learn new things. What she didn't know at the time is that she was seeking old knowledge.

After arriving in Waawiyaataanong, she took up a residency with a small farm, so she could explore Indigenous food sovereignty and the integration in urban settings. She saw the disconnect from traditional foods in her family that led to her father to become ill with heart disease, and wanted to help break that cycle.

Initially, she had a lot of guilt when she planted her feet on Michigan soil, because she felt her traditional knowledge wasn't enough to be qualified under the standards of academia. But Shoote explains that eurocentric definition does not encompass the connection of land for Indigenous Peoples, and cuts food sovereignty into a simple definition, so "it's easily digestible for the white gaze."

A textbook definition of food sovereignty is "a community's ability to produce its own food on its own terms," which doesn't sit right with Shoote. She believes that Indigenous food sovereignty won't make money, in a capitalist sense, because it runs deeper than that — it's a personal connection with the land, the community, and with the plants.

"Traditional knowledge is all encompassing. It doesn't need academia to validate it," Shoote states.

So she pushed herself to outgrow what she was indoctrinated to think, adding that her and other Indigenous seed keepers and farmers have ancestral strength that stands alone, and the work they do supports a greater system.

She noticed a lack of accessibility of traditional foods and medicines for urban natives. Through her urban-agriculture project, Leilú Gardens, on the outskirts of Pontiac, Shoote has created a safe space for Indigenous people to "heal wounds caused by intergenerational trauma through land-based practices."

There, she grows traditional medicines and foods, like heirloom squash, corn, and beans not typically found in the city. She says, "it's about going back to our original systems," hoping that it'll help close the gap in disparity that Native Americans face in the food system.

"The goal in doing this, is to create a more equitable food system for local Indigenous People," she says. Having her garden accessible helps facilitate nourishment for both the body and spirit, she says. The resources stay within her community, something she believes is crucial in strengthening networks for food security through seed and resource sharing.

Soon after her garden was up, she began hosting pop-up community dinners that focused on relationships and re-introducing Indigenous foods to Waawiiyatanoong. One of the meals she showcased was a manoomin (wild rice) chowder. Shoote partnered with Ziibimijwang Farms, owned and operated by Waganakising Odawak (Little Traverse Bay Band of Odawa Indians) for manoomin, which was hand harvested by Anishinaabek foragers. She also grew Lions Mane mushrooms and harvested wild ramps, along with maple syrup that Shoote collected and processed from her sugarbush in Waawiitatanoong.

"The meal is a reflection of our surroundings,'' Shoote says. The pop-up dinners are open to the public but are Indigenous-focused, meaning they honor Native foods and what's available in the seasons. That's how tribes ate traditionally, and Shoote still follows those teachings to honor these epistemological belief systems.

Shoote encompasses the spirit of food sovereignty and the meaning to feed people through connection of community in all relations. She recognized a need for connection in the city of Detroit, and brought it to her community.

Through Leilú Gardens, Shoote has created a safe space for Indigenous people to “heal wounds caused by intergenerational trauma through land-based practices.”

Shoote is also a member of I-Collective, a non-profit organization led and maintained by Native Americans all over the U.S. According to their website, the organization is "an autonomous group of Indingeous chefs, seed savers, food activists, and knowledge keepers." She's currently on a residency with a New Hampshire restaurant, Belly of the Best, where she works alongside other Indigenous chefs and farmers, and creates dishes that focus on reclaiming the narrative for Native American cuisine. Shoote says she'll make her way back to Detroit at the end of her residency.

The food allows its members to open up hard conversations in regard to social justice issues. Shoote adds that "a lot of the health issues we (Native Americans) face are directly tied to colonialism and the exploitation our foods and people, so food sovereignty is critical for our survival."

For Native Americans, revitalizing Indigenous food systems is a health priority. Through her work with I-Collective, Shoote has spoken on the detrimental effects that colonization has had on food systems that are so important for the overall well-being of Indigenous People.

It's not just a physical effect, but spiritual, Shoote says, "that connects like a puzzle within them," adding that the foods she's revitalizing "speaks an ancestral language within the very core of us."

She recalls growing up, watching salmon being over-extracted from her communities. Salmon have their own ancestral language and spirit, and Shoote worries how the fishing industry doesn't respect the relation salmon have with their environment, adding the over-extraction hurts a vital part of West Coast tribes' traditional ways of life.

"Tlingit people have traditional ways to maintain their (salmon) population, but we make sure they're well cared for," she says. In Shoote's culture they hold special ceremonies to honor the salmon and their connection to all relations, as they rely on the salmon too.

That's why Shoote continues to push for the next seven generations, and speaks out on the environmental and social injustices tribal communities face.

It all goes back to fostering relationships through ancestral ways. "For me it looks like using ancestral knowledge and practices to envision and create a future where Indigenous Peoples and their land are reunited," she says.

She's doing this by growing the seeds, and facilitating relationships between them and her community. Her bigger plans include growing Leilú Gardens, which means she'll be expanding a land base to steward and create a food pantry stocked with Indigenous foods for the Waawiiyatanoong community.

"It all comes back to a full circle, the ancestors," she says.

This article was produced by the Race and Justice Media Lab at the Damon J. Keith Center for Civil Rights, in partnership with Michigamiing Journalism Project.