Meet the chef who left Aleppo, now proudly serves its cuisine in Dearborn


Think of Aleppo in the year 2017 and the first thing that pops to mind isn’t rich, unique soil, or recipe books full of cuisine that bears the prints of centuries worth of shifting civilizations. That’s because over the last four years, the northern Syrian city was the focal point of the country's ongoing and brutal civil war.


But before the fighting in Aleppo began in 2012, the city was known regionally for its food culture, and that was something to which the rest of the world was finally getting hip. Foremost, Aleppian cuisine benefits from the city’s geographic position and place in history. First settled thousands of years ago, the city that once held 4.6 million residents was an outpost along the Silk Road, and its brush with passing cultures to the east and west enriched and shaped its cuisine.


The soil and climate around Aleppo is also unique in the Middle East, or world, for that matter. Its four seasons yield a bounty of its famous fiery-red Halaby peppers, yellow quince, purple eggplant, bright red pomegranate, sour cherries, pine nuts, Aleppo pistachios, olives, apricots, cumin, cardamom, livestock, and other crops that are difficult to find elsewhere in the region.


Aleppo's chefs work with what is, regionally speaking, unmatched agricultural riches, and in their kitchens run an appreciation and respect for longstanding techniques and processes. One of those chefs is Chamo Barakat, who left Aleppo with his family in 2006, just a few years before the war broke out, and now plies his trade here.


And should you crave the dishes of Aleppo in metro Detroit, there’s one source – Barakat’s shop, Al Chabab, in Dearborn. If you visit, he'll likely tell you all that factors into producing his hometown's distinguished cuisine.


“The [soil], nature, weather, the rain — everything in Aleppo is all different, so the ingredients are different, and everything tastes different and better,” he tells Metro Times. It should also be noted that he’s not shy about discussing his opinions on where the city’s cuisine stands in terms of quality.


“Aleppo — its food is number one in all of the Middle East. The best,” he assures me with a big smile multiple times during my visits. It’s hard not to see a parallel to a proud Parisian chef when Barakat passionately discusses Aleppian cuisine.


And he could be right — though we’ll avoid that contest. But it’s objectively true that the cuisine of Aleppo differs from what we’re used to tasting in the Detroit area, where Lebanese food largely dominates the Middle Eastern food landscape, though Iraqi and Yemeni dishes are also easy to find.


Perhaps the best item on the menu is the umami-rich mohamara, a deep red Aleppian paste that could be mistaken for a form of hummus, but is actually a mix of Aleppo peppers, pomegranate, walnuts, Aleppo pistachios, olive oil, and spices. The meat pies — thin oval discs of flat bread topped with ground lamb or beef — are another piquant option, and among the menu’s best plates. The baba ghanouj, which arrives saturated with olive oil and dotted with bright red pomegranates, is another that's a hit and tastes unlike other local versions of the dish. 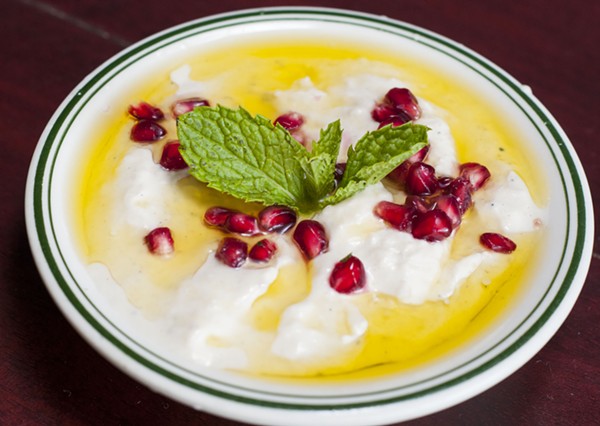 
When considering the entrees, the mixed grill kabob plate is a good place to start, if you’re hesitant to order something totally unfamiliar. Its skewers of chargrilled lamb and beef kafta are spiced with Barakat’s blend (he fears his secrets will be copied, so he’ll reveal nothing about his spice portfolio) and the meat arrives under a blanket of pita triangles covered with the tangy, thick slathers of the deep red mohamara, chopped white onion, and dark green parsley.


Perhaps Al Chabab's best skewer is the Aleppo kebab with pine nuts. Other unique options, like one made with eggplant, also stand out. Barakat's house speciality is a cherry kabob with small balls of lamb kafta nearly adrift in a flood of deep red-purple cherry-pomegranate sauce that arrives next to a mound of rice and fresh pita triangles. If sweet and savory is your thing, then look no further.


Kibbeh — steak tartare of the Middle East — is popular in Syria, and Barakat serves five varieties. The kibbeh labanyieh's ovals of raw meat are encased in a cooked wheat bulgur shell, and the football-shaped packages bob in a flavorful, milky yogurt and onion “soup.”


Al Chabab’s frakeh is a mellow dish of stewed lamb served in a bulgur bed, and the restaurant's arugula and fattoush salads are top notch. Barakat also specializes in sheep head, a traditional dish that his grandmother taught him to make that shares the plate with the sheep's intestines. Aleppo’s butchers don’t waste any part of the animal.


Perhaps the only time there’s any disappointment in Barakat’s voice is when he laments that some of the dishes simply don’t taste the same here as they do back home. Just as Parmigiano Reggiano cheese from Parma, Italy is superior and can’t be duplicated, the land and climate around Aleppo imparts its own inimitable flavor into the dishes.


It’s tough to say when or if Barakat will return to Aleppo, and that's tragic given how proudly he speaks of the city and its cuisine. He grew up there and left school to cook, then worked his way into a kitchen at a five star hotel. A businessman eventually poached him for a much more lucrative venture called Al Chabab, but he and his family left Aleppo in 2006. They landed in the U.S. in 2009 following a few years in Jordan. Barakat isn’t eager to discuss the war, but says his family is safe, and many of its members have fled to Europe.

Tom Perkins
Arugula salad
The crew at the Dearborn version of Al Chabab includes Barakat, his wife, and daughter, and they roll through 12-hour days while simultaneously running a catering business. The restaurant maintains a steady clientele, and has received press in publications like The Toronto Star and Chicago Reader, though no mentions locally. But word of mouth and the chance to try something new drives the business.


“Look around. You see Syrian restaurants, but there are so many dishes that my dad knows that he doesn't see here, so he wants to make them for everyone," Barakat's daughter, who helps translate, tells us.


After all, Barakat assures me with a smile, people need to try this because “food in Aleppo is No. 1.”