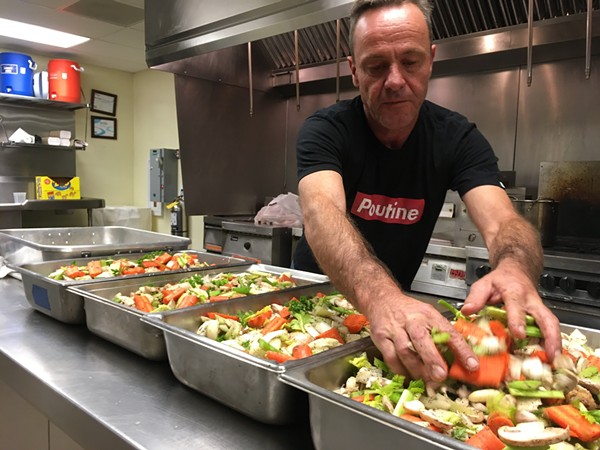 Chef Alex Young/Courtesy Photo
When Americans think of French cooking, many have in mind a nearly monolithic cuisine that's composed of rich cream-based dishes and crépes, but in reality there's quite a bit of nuance in France's regional plates.

In the same way that you would seek out an authentic crawfish boil in New Orleans instead of New England, you'll want to go for ratatouille in Nice, or head to Normandy for camembert cheese.

That regional diversity is what Standard Bistro & Larder will highlight when it opens outside Ann Arbor in mid-January. Chef Alex Young – who won the 2011 James Beard Foundation award for best chef in the Great Lakes region while at Zingerman's Roadhouse – tells us that it will be a spot that fans of the Julia Child and Jacques Pépin school of cooking will especially enjoy, and he will offer a chance to try dishes from all over France.

Courtesy photo
"One of the things that I appreciate about French cuisine is that it's so varied. It's not just crépes and cream sauce, so this gives us a chance to cruise around the country, and gives us something to play with," he tells Metro Times.

This is especially exciting because there's a dearth of quality French cooking in southeast Michigan, and no other James Beard award-winning chefs are taking up the cause.

For a good idea of what's in store, see one of Young's most epic offerings – a dish of duck confit ravioli in a green olive ragout. In it he fills hand made farro pasta with confit of duck and ricotta, then serves it with a green olive ragout and caramelized camembert.

Young will also prepare choucroute garnie, a dish found in the Alsatian region near the German border that usually holds three types of pork – in Standard Bistro's version you'll find smoked pork loin, boudin blanc, and boudin noir sausage – that are served over sauerkraut and potatoes.

Standard's house specialty is also arguably France's national dish – p0t-au-feu, which can be found all over the country, but is a beef stew native to Leon.

Courtesy photo
And a dish common to the Basque region near the border with Spain that you'll find on Young's menu is the grilled merguez sausage that he roasts with mussels and serves with white beans.

He adds that Standard's focus will be on dry-aged meats and in-house, artisanal butchery, as well as handmade pasta like raviolis and tortellini made fresh daily with stone-milled semolina or farro.

Beyond the entrées, expect bread to be baked fresh several times daily and pastries made in house. Dinners will run between $25 and $40, while lunch items will cost between $12 and $20.

On Saturdays and Sundays Standard will offer a brunch menu that centers around crépes and omeletes, as well as "typical brunch things with a French flair."

Courtesy photo
Young says Standard will feel like a 1930s Paris bistro with Parisian-style chairs, coffee tables, and tilework. When customers enter, they'll walk through the larder amid shelves stocked with meats from the butcher, freshly made pasta, goods from the bakery, and other pre-made items. The roughly 4,500-square-foot, 118-seat space in Scio Township used to house the Creekside Grill, and a basement will be utilized for private banquets.

Young tells us that he left Zingerman's this year because he wanted to do his own thing, which is an expected move for an accomplished chef.

"I wanted to do something new. I've been dreaming about this restaurant for a while, and decided it's time to make it happen," he says.