A legendary Detroit restaurateur and his legendary restaurant are back 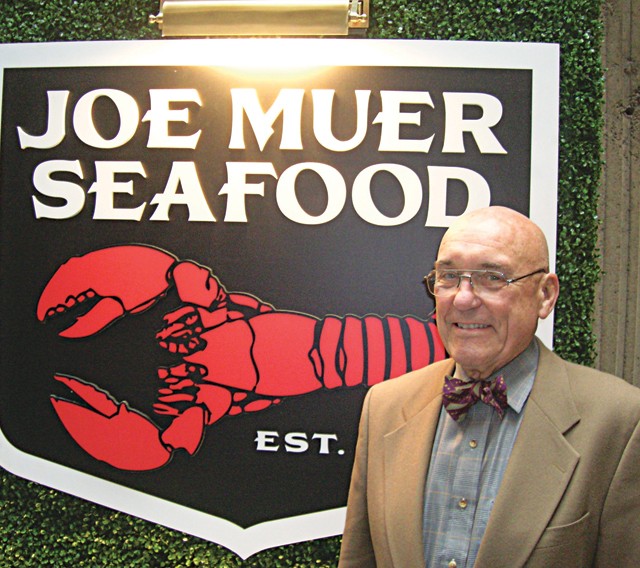 Opened in 1929, Joe Muer Seafood was long a Detroit institution, a swanky joint near a bustling downtown where auto executives, ad men and engineers talked shop over cocktails and the fruit of the sea. And when Joe Muer's closed its doors in May of 1998, it seemed another sign of the city's decline. But now Joe Muer has joined forces with Joe Vicari, the driving force behind Rojo Mexican Grill and the Andiamo empire, to resuscitate the legendary Muer restaurant, serving up the fine seafood and delivering the service that distinguished the original. Happily this comes at a time when signs point to a downtown Detroit on the rebound.

Metro Times: What did it take to get you to come out of retirement and return to the business?

Joe Muer: First of all, the attraction of this style and the quality of restaurant. Joe Vicari and his wife, Rosalie, are personally responsible for making this happen. They pulled me out of retirement. They started talking to me six years ago. At that point you had a tragic city. Who wanted to come down here anyway? I didn't want to even consider the thought that I could bring the name back to the city. However, times change. I agreed to do this last fall, and here we are. The Vicaris are visionaries. They saw the need. The core of the city — downtown — is really starting to expand. We've got a new mayor, Dave Bing, who's fabulous. The lights are coming back on. New businesses are moving in. There's development. The success of sports teams brings in hundreds of thousands of people. Andiamo is so successful downstairs. Joe Muer's gives a synergy of interest in the building. The only other fine-dining restaurant is the Coach Insignia. We're centrally located, rather than being in a suburban complex. That's the best part of what we had on Gratiot Avenue. People come here from all over. We're in the Renaissance Center, headquarters of General Motors. We've got a great view of the Detroit River. There's new blood in town. The older people retired. There's a new generation that's helping to spur this. Wow! Big time.

MT: You always seemed to be at the restaurant greeting your guests, every day and every night, filled with boundless energy. Are you up to the challenge again?

Muer: There's something about entertaining people, serving people who share their lives and their spirit with you. It's uplifting. This is a happy environment. We're not a doctor's office or a hospital. This is where people come to enjoy. It's energizing for me, for Joe and Rosalie, and for the employees too.

MT: How much of the old restaurant remains in the new one?

Muer: We've still got the standard items, like bean relish, black bread, stewed tomatoes and creamed spinach that people expect. The menu will display some more modern recipes and presentations. Some of the fish that we got years ago are no longer available due to sustainability issues. We are getting our fish from sustainable sources, like Alaskan halibut instead of baby eastern halibut, flounder from the East Coast. We serve Alaskan halibut with oysters Rockefeller topping. You can still have your fish cooked any way you want it. Our menu changes about once a week to reflect what's fresh and available. We don't want our waitstaff to have to tell customers that we are out of what they want to order after seeing it on the menu. Some people have expressed concerns about seafood from polluted waters, such as shrimp from parts of Asia. Our shrimp are American whites. Our salmon comes from a deep salmon farm in Alaska. Properly sourced seafood is good for you. We buy whatever we can locally.

MT: Is high-quality seafood available to people who are not in the restaurant business?

Muer: It is. I like to buy ahi tuna at Costco. They fly it in fresh. I've bought Tilapia at Sam's Club and frozen it in small portions. There's nothing wrong with freezing fish as long as it's fresh when you freeze it.

MT: Joe Muer's was always known for first-class service. Are you able to maintain that level today?

Muer: I'm involved in the training today by reviving the format, kind of an outline of the things I did in my old store. I'm putting an angle on the protocols that the Andiamo organization has developed. Training traditional values, the relationship that has to be created between the employee and the customer is important. We also have the staff taste the food so that they know what they are serving.

MT: There were probably more deals made over the proverbial three-martini lunches in bygone days at Joe Muer's than there were in corporate boardrooms. You must have some stories about what went on back then.

Muer: In the old days, people would make engineering drawings on tablecloths, write contracts on placemats. I witnessed the incorporation of a law firm. I had everything happen from engagements to marriages to divorces, from food-choking to death — everything except childbirth. One night, one of the wealthiest men in the world, John Kluge, owner of Metromedia, told me that his mother's wish before she goes to heaven is to have her last meal at Joe Muer's. That's the original bucket list.

MT: What led to the demise of Joe Muer's and the London Chop House and the Pontchartrain Wine cellars after many successful years in business?

Muer: In spite of their indomitable position, they went out of business because of the economic changes and social changes in the city. Much of the advertising industry left Detroit. The old business community evaporated from the city. They got all the walk-in customers for lunch. Since that little business sector down there changed and attorneys were moving out, that was sustenance for lunch and for dinner. We lost demographics. The city was turning more to crime, drug dealing and problems on the expressways, creating fear for people who wanted to come downtown. Twenty years of Coleman Young was a killing factor.

MT: How do you envision the city of Detroit in five years?

Muer: We're on the crest of a change. As long as we keep political order in this town, have great leadership, we're going to have a following of city fathers who will help attract people to Detroit because it's the best buy in the United States. We've got all the resources — physical, human, environmental, natural — that can support a strong economy.

MT: Is there a recipe that you're willing to share?

Muer: I like to use a thick salmon fillet cooked with caramelized capers. I cook the drained capers, slowly in olive oil until they almost get crisp. Add lemon juice and fresh parsley. The fish can be poached, broiled, seared, whatever, and finished with the sauce. It's good on pasta too. Plain broiled cod, dipped in butter, is one of my favorites. Simple and delicious.