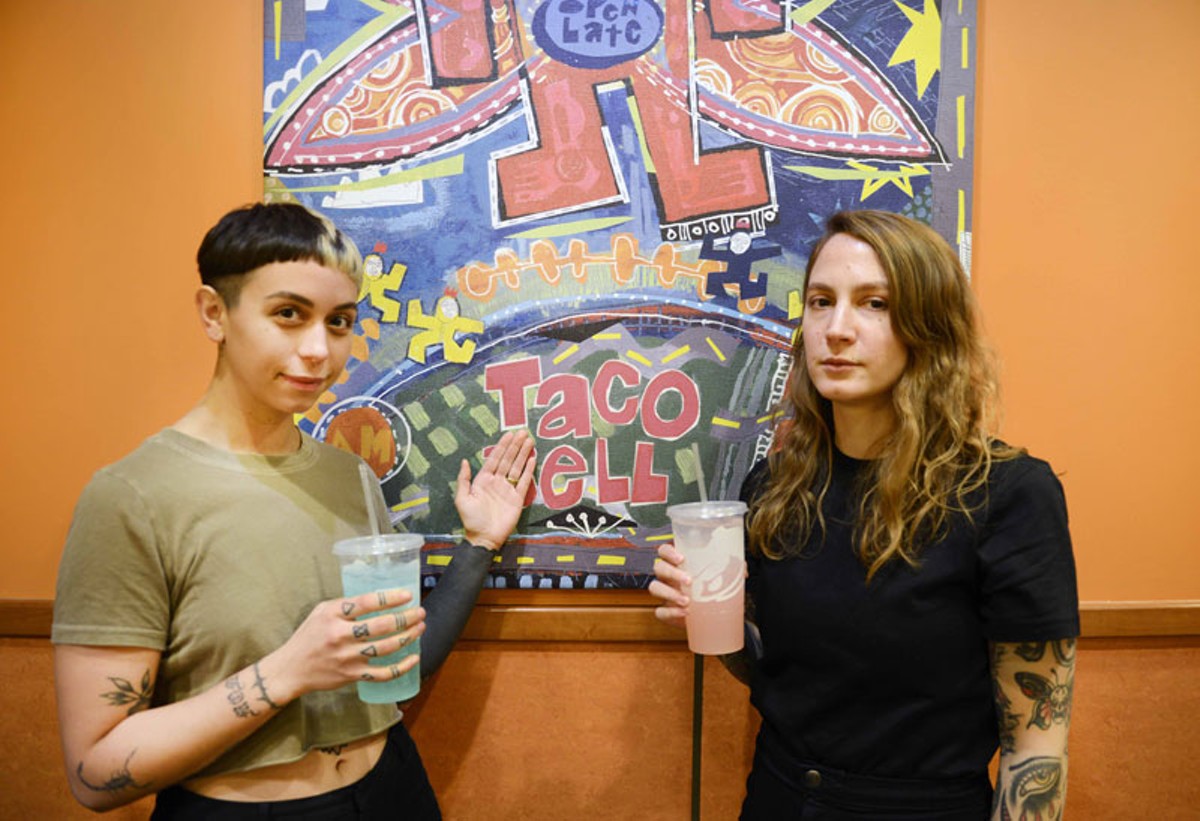 Nina Paletta moves a stray hair out of Meghan Shaw's face, each begrudgingly sipping on Taco Bell soft drinks the color of cotton candy and antifreeze.

Paletta and Shaw used to date, but their recent partnership comes in the form of Street Beet — Detroit's sustainable vegan pop-up from which their recurring Taco Hell menu was born.

"We kind of rebuilt a friendship based on food," Paletta says.

Shaw adds that they would probably not be friends following their split if not for Street Beet.

What started as a few one-off events earlier this year blossomed into a weekly smoothie and taco-centric pop-up within Blue Velvet Vintage in Eastern Market which, almost instantly, created a steady following. At the time, both Paletta and Shaw juggled service industry jobs within the city. The demand for Street Beet's take on vegan fare was so great that Paletta was able to leave her bartending job, with Shaw following a month later, making Street Beet their full-time gig.

"It was a nice surprise," Shaw says of Street Beet's quick success. "I was panicking because I was 30-years-old and I was thinking I was never going to do anything."

"I didn't complete any sort of degree, and I was working in the service industry, taking freelance jobs here and there," Paletta echoed. "But I just stuck to thinking that something was going to come my way and when it did, I would know. And that's exactly what this moment was — all signs pointed in the direction to keep doing it."

The Taco Hell thing came later, when Paletta and Shaw joked about a Taco Bell-inspired pop-up after passing a long and winding drive-through line.

"We were kind of joking at first, and then we kind of sat there for a moment and looked at each other," Paletta says. "It was like this moment of clarity."

Shaw adds that though Taco Bell can be easily made to be vegetarian and vegan-friendly by substituting meat and cheese for beans and rice, what Street Beet set out to do was a more nutritional spin. Paletta reminds us that there is always a risk that comes with trusting that the order has been made correctly.

"There's one time we were living together when Meghan was craving Taco Bell. She'd been asking for us to get it for months and I was like, 'No, fuck no, like, we're vegan. It's not going to work out. It's also disgusting,'" Paletta says. "I finally gave in one night, and we ordered tw0 5-Layer Burritos. I let her order, she did all the substitutions. We get home, we sit on the couch when we bite into this burrito, and it's meat. It was just like, 'Oh my God, I told you!'"

"Also, you did just blindly bite into the burrito, which was kind of silly," Shaw jabs.

Street Beet's upcoming collaboration with vegan pizza pop-up — appropriately called Pizza Butt — will mark the duo's sixth consecutive Taco Hell event. The duo confesses that in Street Beet's early phases, they copped the name Taco Bell and slapped 'vegan' in the front of it, using the fast food giant's logo on their Facebook event page and featured menu item names word for word. Paletta cites the parody clause — a copyright clause that allows the use of copyrighted material if transformed for parody purposes — for their ability to do what they're doing, but admits that she hasn't looked into it that much.

"This will be our sixth one, and I think they would have caught wind of it by now, right?" Paletta says.

"They don't care," Shaw interjects. "They don't offer vegan food, anyway. They don't even have the Impossible or anything."

Taco Hell now has its own Taco Bell inspired logo — their bell's clapper is a devil's tail engulfed in flames), and each of the menu item names have also been tweaked to fit Street Beet's aesthetic (and to, most importantly, narrowly avoid potential legal conflict). Among the amended items are the Nachos Hellgrande, Sleezy Gordita Crunch, Chaloopy Supreme, Crunchywrap Supreme, and Cinna Twizted. More than the names, though, it is Taco Hell's ingredients that set them apart from their fast food namesake. A homemade walnut "ground beef" is used in place of meat and that substitution can be swapped for a textured vegetable protein as a nut-free option. Cashew cheese, also made in-house, serves as a replacement for Taco Bell's nuclear-orange dairy product on a number of items, and shredded jackfruit is used in place of chicken. Each item ranges from $8-$9, while their Nacho Fries alternative will run you $6, and the brands only current desert item, Cinna Twizted, is $4.

Shaw admits that cost can scare people off from a vegan lifestyle, but says they have to conform to market pricing. "I think a lot of people don't understand why it's so expensive," she says. "It's the quality of what's going into it. So, I think people do get afraid of pricing, and I think it is an issue, but at the same time, like, we really can't lower our prices because of the ingredients we use."

For Paletta, she too understands that the transition to veganism can be daunting.

"I'm not going to lie, it's a huge transition," she says. "Not only on a lifestyle level but financially it's a total shift. Especially in the beginning because you're probably buying more alternatives like cheese alternatives, things that are prepackaged — that stuff is totally outrageously priced. But once you learn how to buy basic ingredients and actually cook with vegetables it's not, it's not so crazy in the long run. We're still learning, too."

Right now Street Beet is able to employ anywhere from 10-14 kitchen and front of the house staff for each of their events. They are in the middle of curating a vegan bar-food inspired menu for soon-to-be rebranded Royal Oak bowling alley, Bowlero, which will relaunch a new concept in the coming months, and they've been asked to cater a wedding reception as an alternative late-night food option.

While they agree that the pick-up-and-go format of the pop-up is fun, Paletta says the many unexpected challenges have got them eyeing a brick-and-mortar location in the coming year and they are in the process of finalizing details.