Though the Highland Park store didn't have a grand opening, partner Leonard Hume says they are considering doing a back-to-school event soon to give away backpacks and school supplies to local children.

"We want the community to know we're here," he says.

Hume is running the Highland Park location with Randy White, the son of corned beef egg roll inventor Kim White, and brother to Hasan White, who has helped the chain expand in recent years.

Though Randy White says he has worked in the restaurants since he was a child, the Highland Park store is the first run by him.

"It's my brother," White says. "He has a real passion for this, so he's been popping them off all over the place." 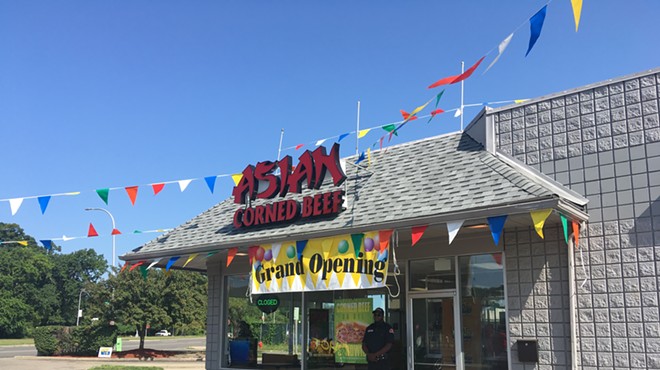 "We're trying to raise the bar," Hume says. "We came to the area that no one wanted to come to. That was our focus to come back here. We know they're focused downtown," he says, gesturing south, referring to other Detroit developers. "But we wanted to bring it back here so hopefully, eventually, it will spread."

Hume says he hopes someday the development along Woodward Avenue can connect Midtown to Ferndale. "That's what our vision is, for it to come past Midtown," he says. "We know it kind of stops right there."

Hume says the Highland Park location had been vacant for years after suffering fire damage before Asian Corned Beef moved in. "We had four walls," he says. "Nothing else." Since Highland Park was under emergency management, they had to deal with the state to get work permits, which he says took more time. Now, the space boasts a bright, clean interior, including an aquarium, which has become a motif across the Asian Corned Beef stores — though the Highland Park location is the first to have one inset into the wall.

Corned beef egg rolls, for those not yet in the know, were invented more than 30 years ago in Detroit by Kim White, a Vietnamese immigrant. It delivers exactly what it promises: an Asian-deli fusion snack made of salty, cured deli meat, cheese, and cabbage wrapped in a crispy egg roll for just $3.

The Highland Park store does not serve Asian Corned Beef's new lobster rolls — for now, those are unique to the Woodward and Seven Mile location.

More information on the chain is available at asiancornbeef.com.