A grassroots group is proposing redistricting reform in an effort to resolve Michigan's gerrymandered legislative and congressional districts.

In short, it wants voters to approve an amendment to the Michigan Constitution that would bar politicians from drawing their own districts. Instead a nonpartisan redistricting commission would develop fair districts that are more representative of voters statewide.

Such efforts and commissions have been successful in states like Arizona and California, and the group, called Voters Not Politicians, recently took the first step in the process by filing with the state as a nonpartisan ballot question committee.

In a press release, the group wrote that a "Citizens’ Redistricting Commission" would be responsible for drawing Michigan’s congressional and state legislative districts, thus "taking the process out of the hands of politicians."

Whichever party controls the most legislative districts writes the state's laws. Thus it's logical (though immoral) for representatives to draw their legislative districts in a way that ensures their party's voters are spread among the majority of the state's districts. It also ensures politicians stay in power.
Under its proposal, current and former politicians, lobbyists, political consultants, major campaign donors, and other political insiders would be ineligible to serve on a Citizens’ Redistricting Commission.

"Currently, the political party in power in the state legislature draws the lines. Using voter data and sophisticated computer programs, politicians are able to select their voters with precision, effectively determining the outcome of an election long before election day," Voters Not Politicians said in a press release.

That art of politicians picking voters is called gerrymandering. Why is it a problem? Consider just how nonsensical state-level politics is in Michigan:
All four situations are a direct result of gerrymandered legislative districts. Voters don't get the government for which they voted, and the tactic breeds crazy politicians who are insulated from voter anger. 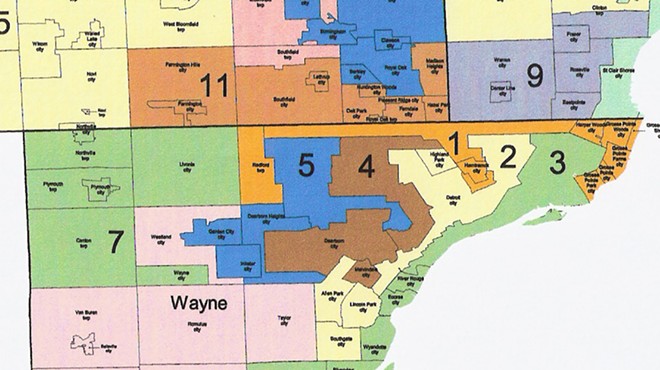 Once again, Michigan Dems receive more votes in the State House, but Republicans hold onto power

"It's almost like it’s a one-sided issue because there are very few arguments to justify gerrymandering," says Walt Sorg, a Voters Not Politician cofounder. "It’s a real blight on government. It doesn't matter if you're a Democrat or Republican. It just isn't right for anyone."

Voters Not Politicians' approach and presentation is wise. Republicans are benefiting greatly from the gerrymandered districts in Michigan, but the group isn't framing it as a partisan issue, because it's not. If one needs evidence that Democrats are willing engage in shady redistricting, look to Maryland.

It's also presenting reform as a way to strip politicians of a little power and give it to the people. Everyone dislikes politicians to some degree these days, and there's a general sentiment across the political spectrum that they're a corrupt group that favors corporations and cronies over the everyday guy. Redistricting reform would keep that in check.

Voters Not Politicians is also presenting a relatively simple solution to a complex issue, though one that's accurate and gets at the heart of the problem.

"Politicians should not be choosing voters. Voters should choose politicians. At a gut level people get that," Sorg tells MT.

Though it's an issue that involves the mechanics of politics, there's growing interest and concern over redistricting nationally. In Arizona, voters in 2014 approved a ballot measure to establish a nonpartisan redistricting commission. The state's Republicans sued to block the commission, but the U.S. Supreme Court rejected the GOP's argument. Funny enough, Republicans still hold power in Arizona, though not by a disproportionate supermajority.

California also established a similar commission, and courts recently found gerrymandered districts in North Carolina, Alabama, and Wisconsin to be illegal. Leaders on both side of the aisle, like Barack Obama and Arnold Schwarzenegger, are dedicating their energy to tackling the issue.

So far, Voters Not Politicians has only registered the non-partisan ballot question committee and has not started collecting signatures, submitted ballot language, or determined exactly how a redistricting commission would look or operate.
The group is volunteer driven and, to this point, is only relying on small contributions from individuals. But Sorg says it needs around $2 million to be successful, and could seek the backing of non-partisan groups invested in fair elections. Over the next month, Voters Not Politicians will hold a series of town hall meetings across the state to determine how the 100-word ballot question will look. Once it files ballot language and collects its first signature, it has 180 days to collect 315,653 more.

It should be noted that two of the election's races were for partial terms that end on Jan. 1, 2017. If those aren't included in the math, then Republicans win the raw vote count for the next session by about 3,000 votes. But that doesn't change that Republicans are far overrepresented in the House.

In 2014, Michigan voters cast 30,000 more ballots for Democrats than Republicans in the state's House of Representatives races. Despite that, Republicans held and continue to hold a 63-47 advantage.

Dr. Davia Downey, a Grand Valley State University public health professor involved with Voters Not Politicians, noted that 91 out of 110 races in the 2016 Michigan House race were decided by margins of 10 percent or larger.

Similarly, in Michigan’s 16 races for Congress, the winning candidates won by a margin of at least 13.7 percent, while 12 out of the 16 races were decided by more than 15 percent.

"Politicians, not voters, are deciding who wins,” Downey says.