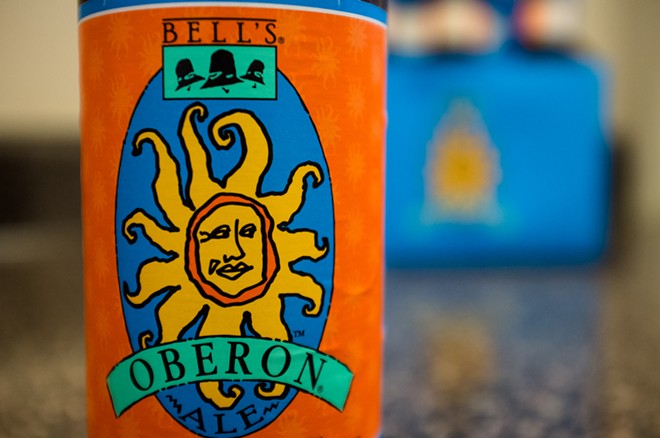 This year’s Oberon Day, where the Bell's Brewery beer officially goes on sale, is happening on Monday, March 21. Several restaurants and bars in metro Detroit will be celebrating with some hosting keg tappings at midnight.

Many consider the release an unofficial signal that Spring is finally here. Oberon’s bright orange and blue label with its funky, smiling sun is a much-welcomed sight after a long winter of seasonal depression.

This is the first time the annual tradition has been celebrated since 2019 when Bell’s Brewery founder Larry Bell retired and sold the company to Australian-based beer company Lion.

Bell’s Eccentric Cafe in downtown Kalamazoo will host an Oberon party starting at 11 a.m. on Monday with live music, and an Oberon-inspired food menu. Different flavors of the seasonal fave will also be on tap including a mango habanero Oberon, pineapple Oberon, and cherry Oberon.

HopCat locations in Kalamazoo and Detroit, Buffalo Wild Wings locations in Ann Arbor, and several other bars across metro Detroit will be celebrating Oberon’s release. To find a celebration near you, (or just a place to drink Oberon without all the fuss) you can check out the event schedule on Bell’s Brewery’s website.

Limited release Tropical Oberon, brewed with guava, mango, and passion fruit, will be back this year in mid-April, too.

After living in Japan and traveling across Asia, Randiah Camille Green realized Detroit will always be home. And when she says Detroit, she's talking about the hood, not the suburbs. She has bylines in Planet Detroit News , Bridge Detroit , BLAC magazine, and Model D . Her favorite pastimes are meditating...
Read More about Randiah Camille Green
Scroll to read more Drink News articles