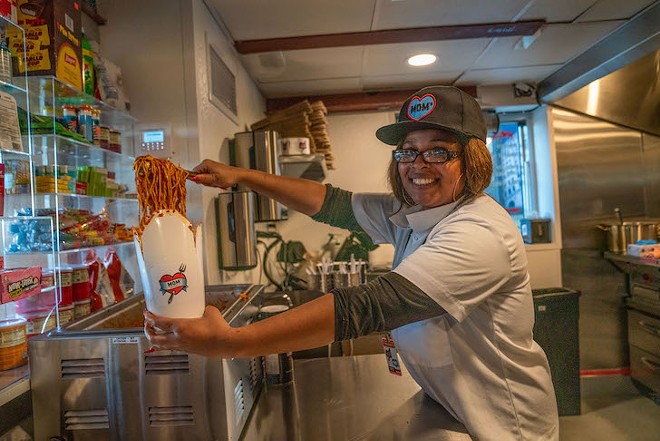 An (alleged) Ypsilanti-based business claimed in an Instagram post that it designed the menu for Eminem's Mom's Spaghetti restaurant in Detroit before being dropped from the project — a claim that Eminem's team vehemently denies.

"Completely untrue," Eminem publicist Dennis Dennehy tells Metro Times in an email. "Somebody just trying to get attention on the back of the launch."

An Instagram account named @spadayypsi wrote the post on Wednesday, the day Eminem opened his restaurant in Detroit's Union Assembly. In the post, Spa Day claimed it was approached by Em's longtime manager Paul Rosenberg ten months ago, only to be "ghosted" from the project eight months later due to violating a non-disclosure agreement.

"Mom's Spaghetti is my menu, my ideas, my family and I have absolutely nothing to show for it," Spa Day Spaghetti claimed, adding, "I ask that you please do not support this business until they give proper credit to Spa Day."

After Metro Times reached out for comment, Spa Day Spaghetti deleted the post. "At this point I am unable to do any press," Spa Day wrote in a temporary Instagram "Story" update. "My statement is my statement and I've said too much already. Thank you for the support."

The internet never forgets, however, and the post was archived on Reddit, where users pointed out they could find no evidence that Spa Day Spaghetti even actually existed as a business.

According to a press release from Eminem's team sent Monday, it partnered with Union Assembly restaurant group Union Joints to create the menu for Mom's Spaghetti back in 2017, long before Spa Day Spaghetti claimed it got involved. It was part of a pop-up Eminem held at Saint Andrew's Hall to celebrate the 15th anniversary of 8 Mile, an event Metro Times covered at the time.

According to the press release, Mom's Spaghetti was served at various subsequent Eminem festival appearances including Coachella, Firefly, and Governor's Ball.

"We've had a lot of fun putting this project together with the folks at Union Joints, and the response from fans has been overwhelmingly positive," Rosenberg said in the press release. "The previous pop-ups were really a test for us to determine whether there was enthusiasm for a regularly-occurring Mom's Spaghetti spot that would be open all year long."

"When we were first tapped to create the pop-ups it was an honor for all of us involved," Union Joints co-owner Curt Catallo also said in the press release, adding, "We're proud of the fact that we created a scratch sauce that tastes like it's straight from the jar, and wok-firing the noodles gives it that leftover pasta snap."

The original archived Spa Day Spaghetti post is below.