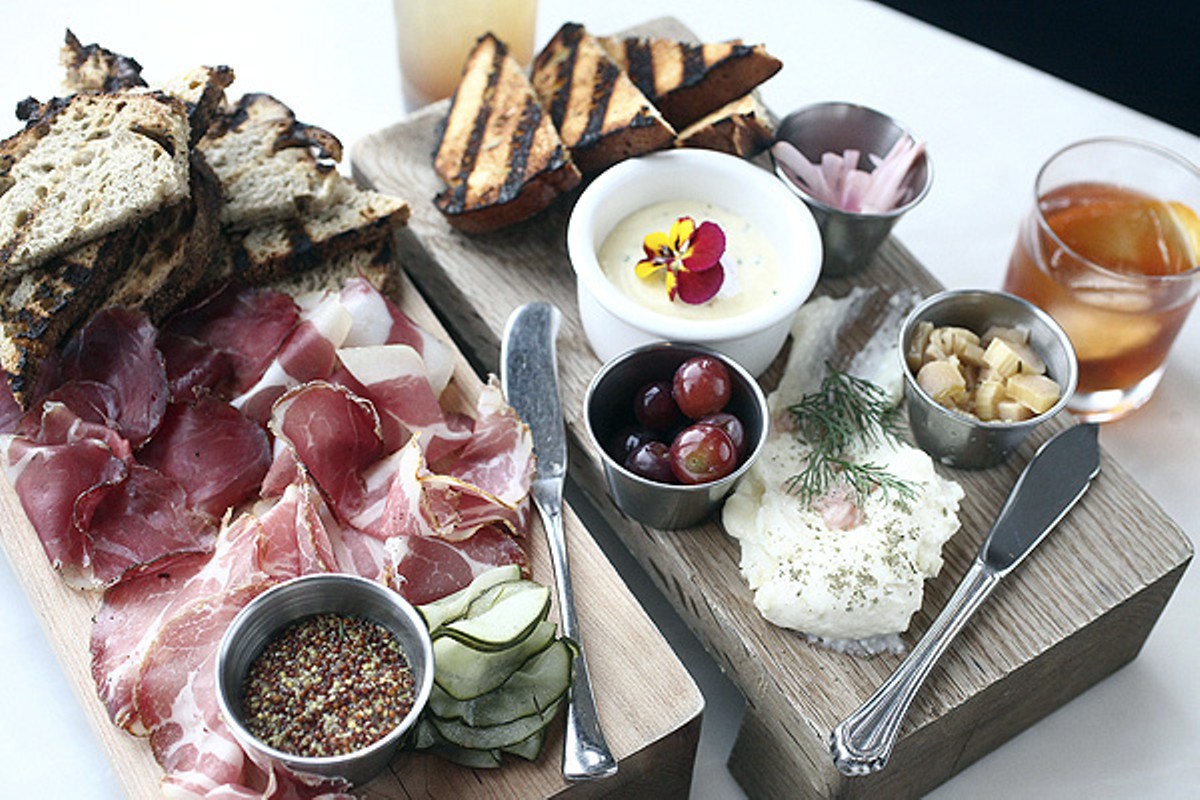 For any longtime Detroiter, the renovation and resurrection of the Grand Army of the Republic building must count as a triumph: that weird triangular castle, owned (at least in rumor) by various non-development-minded landlords, sitting in the shadow of Foxtown off the Woodward corridor. It was for too long an empty reminder of the fact that downtown still wasn't even as big as it used to be — and now it's home to one new restaurant and a second (hopefully still) on its way, proving that the old GAR has come far from its once-dilapidated state.

Republic Tavern is a gorgeous place. The inside is a pleasing combination of art deco, modernism, and Victoriana: There's wood and gilt and lovely tone-on-tone blue wallpaper. A massive brass replica of the building sits by the bathrooms, at a prominent corner in the dining room. The restaurant's odd shape is a result of the distinctive structure itself: You enter at a corner, and the dining room encompasses an odd sort of triangle spread out before you, the bar dead ahead and covering most of the right-hand area; to your left, marble and wood tabletops are distributed across a herringbone wood floor.

The menu is built primarily for grazing: Most items are enough for a table of three or four to share; over the course of a couple hours, you might well go through six to eight plates if you're not ravenous. While the menu slants more toward meat than not, there are several plates of vegetables or salads, so, while the vegetarian diner might not be in heaven, they're certainly not in hell. It's also a menu that's in the midst of current culinary trends, using confits and pickles and charcuterie, served on wooden boards and bowls, oddly shaped china, and oversize pewter chargers.

There's complexity of intent and execution throughout the offerings. Technically, the food is diverse, encompassing foams and powders, sabayons and semifreddos, well-preserved food next to food barely cooked. Flavors are chosen, accentuated and texturally amplified in skillful combinations.

Some dishes are clean and simple, like the "Egg and," a seasonally changing dish that featured ramps in their prime: Nothing more complex than a simple egg-based sauce and lightly sautéed leeks, garnished with lamb prosciutto. On its face, it's not a complex combination, and yet the effect is more than the sum of its parts. Texture and taste are used in concert, the smooth egg and the still-crunchy ramps mixing their delicate sweetness and the funky springtime onion-garlic perfume, punctuated by the salty, pungent, gamy lamb.

Other dishes play with more deep, complex flavors — like the duck confit "salad," a combination of pickled cherries, mint, and shredded confit meat arranged around a whole, raw egg yolk, and garnished with house mustard. Stirred, the yolk becomes a creamy sauce as it mixes with the duck. With a pile of black pepper bread beside the bowl, the challenge becomes to enjoy the earthy complexity of the dish instead of devouring it too quickly. The cherries are sweet, tart, and sour in equal measure, the egg yolk mellowing and marrying all the flavors of the confit and garnishes, the mint refreshing and bright amid the heavily prepared dish.

Yes, it's all that sort of stuff. It's all house-made goodness, from top to bottom; the Tavern is doing things that are only worth it if they're done exactly right, and often nobody does anything right but you. So yes, on the Ploughman's plate, the charcuterie is house-made, and so is the cheese — a soft white farmhouse cheddar — and the pickles and the mustard. And by God, the Tavern succeeds, with everything made in-house measuring up and fitting the role envisioned for it. The pickled cherries are so good, in all of their applications, that they threaten to steal the show — particularly on the chicken and duck liver mousse, they're the counterpoint to the meaty, lightly metallic, perfectly smooth and creamy pâté. Sure, the mustard is good too, but there's something primal and perfect about that duck and cherry combination that can't be denied.

Beef tallow fries sound a lot less familiar than they are: The astute of palate will recognize the potato and beef flavor from America's premier fast-food clown. Make no mistake, though — we're a long way from the golden arches, kids. The fries aren't the only place that animal fats get to play on the menu, either: One night, bone marrow fritters are proof positive that anything and everything can have greatness thrust upon it in a deep fryer. The batter, fluffy and light, encases small nuggets of fatty goodness, melting in your mouth from their partly rendered state into a nectar of concentrated flavor and succulence. Maybe that Texas staple of deep-fried butter makes a little more sense now?

Speaking of which, one of the desserts — described as "mashed potato beignets" by one server — was an unexpected and incredible combination of flavors and methods that left the table silent with awe. Lemon and poppy seed semifreddo and crispy potato skin are the accompaniments, showcasing the versatility of the potato in a way few others even bother to attempt. Everything, from start to finish, is executed perfectly. This is a place with an intense concentration of talent in the kitchen.

The bar is no slouch either: Draft beers come in clever can-shaped glassware, and impressive cocktails are mixed smartly and expertly. The wine and liquor lists are also formidable — the wine slightly more accessible than the liquor to the moderately knowledgeable diner — with the service more than capable of deciphering any part of the menu.

Perhaps the fluidity of it all is what shows that the Detroit restaurant scene has arrived. Chefs come and go all the time, and never is it more risky to a restaurant than at the beginning of their lives: Kate Williams has left Republic after overseeing the development, the much-anticipated opening earlier this year, and starting the Tavern off on a highly elevated path. It's the elephant in the room now: How do you survive when the head chef is gone? Can you maintain the quality, the standards, the flavors, and techniques? Only time will tell. Republic certainly has all it needs to continue to excel — today, it's one of the best restaurants in Detroit.