Detroit’s Baobab Fare is a home for refugees 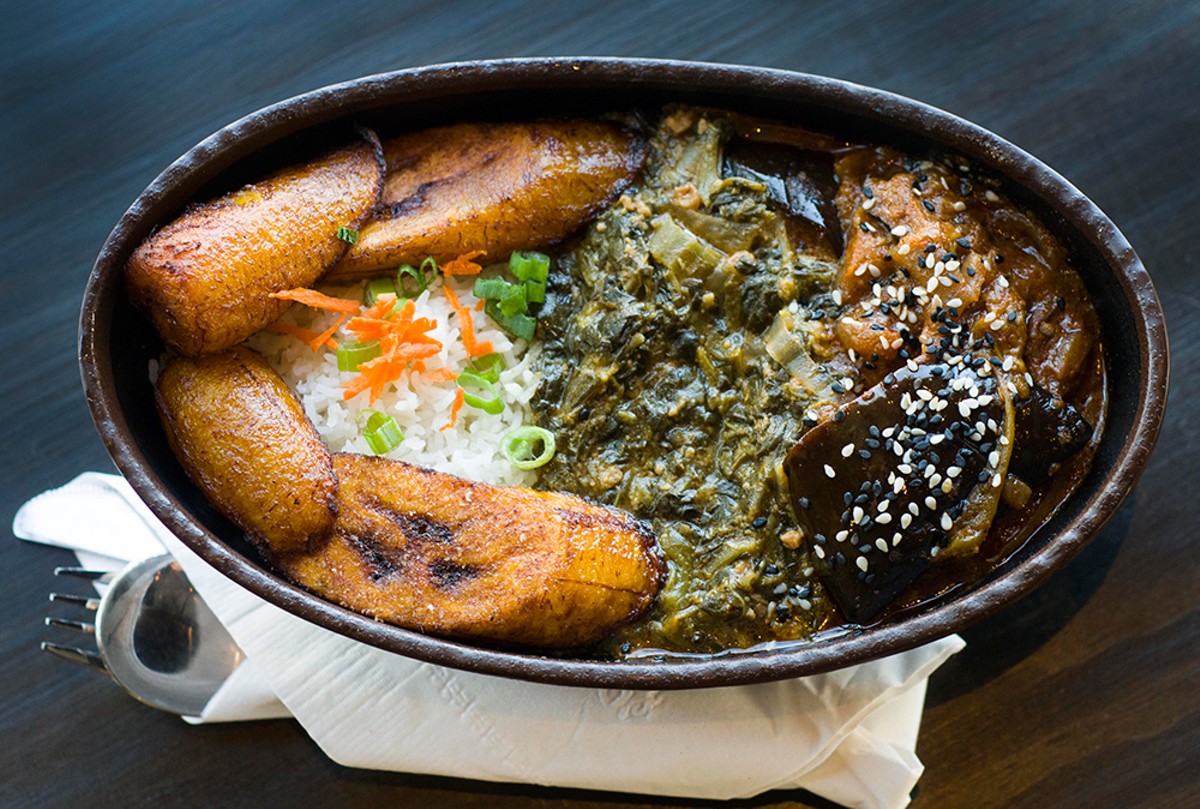 Just seeing the word "baobab" gave me such a warm and friendly feeling. I felt sure a baobab tree had starred in a children's book read long ago, once a year on visits to my grandmother's house, lolling on a horsehair sofa in the summer heat. My sisters agreed, but we weren't able to pin down a title (no, it's not The Little Prince). Anyone know?

In any case, look up a picture. It's a weird-looking African tree. Baobab Fare co-owner Mamba Hamissi (along with his wife Nadia Nijimbere) says they thought that if a baobab tree can grow in the desert, then their restaurant could grow in Detroit.

The restaurant gives a warm feeling too. The sunny yellow wooden chairs, the floor-length windows on Woodward, little vases of yellow daisies on the tables, a collection of woven baskets on the walls, the slogan on the wall: Detroit ni nyumbani: "Detroit is home."

It became home after the couple arrived in Detroit at Freedom House in 2014 as refugees from Burundi in East Africa. "Graduates" of Freedom House and of Sanctuary, a nonprofit that also aids refugees, they've staffed Baobab Fare with other former refugees too — another way that the restaurant is welcoming.

Detroiters' main experience with East African food up till now may be Ethiopian. Burundian is different. There's no injera; you get a fork, but the stews and braises are just as intense and slow-cooked. Meat in Burundi is only for special occasions, according to Hamissi, because of the cost. But there's no shortage of meat on his menu: "Every time you come to Baobab Fare you are coming to party, so take advantage."

I loved both the vegetable and meat dishes, but would single out the goat and the eggplant. The latter is stewed within an inch of its life, soft and rich and velvety, and expertly spiced. The sizable goat shank is equally rich in its goaty way, topped with pickled onions and scallions; it's lots of meat.

All dishes come with a choice of rice pilau or coconut rice; the latter is more interesting, with just the right amount of mild flavor. They also come with some combination of fried plantains, soft yellow beans, peanut-stewed spinach, or fresh corn salad. Of these the bland beans (a Burundian staple) are the least exciting. The corn is cool and tastes straight off the cob — the kind of summer dish you're too lazy to make at home but love for someone else to produce for you. The spinach is stewed super-soft. No one can resist fried plantains, and these fat ones have a bit of caramelized crust.

I also loved swai fish with a topping of mustardy onions; the boneless fillet is soft and mild (but there are doubts about its raising practices). The stewed shredded beef also seemed full-bodied and generous; my companion would not share more than one bite. Chicken comes either fried or marinated and roasted.

I truly loved the tamu dessert: a pudding of avocado and passion fruit. Customer reviewers on the site got it right: "tangy, creamy, and rich — but still light! ... perfectly refreshing and not too heavy... reminds me of sorbet while smoothly melting in my mouth....creamy, sweet yet tarty and fruity." All those things. Mandazi, an advertised "African donut" with cardamom, was unfortunately not to be had.

My complaints about Baobab Fare: Both teas I tried were weak, an iced lemongrass and a hot ginger. The ginger was just a teabag. With no alcohol, more attention should be paid to something decent to drink. And hopefully service can be sped up as experience grows. My party arrived for a 7 p.m. reservation one Saturday. Our tea came at 8, our food at 8:15, our forks at 8:20. The place was deservedly busy!