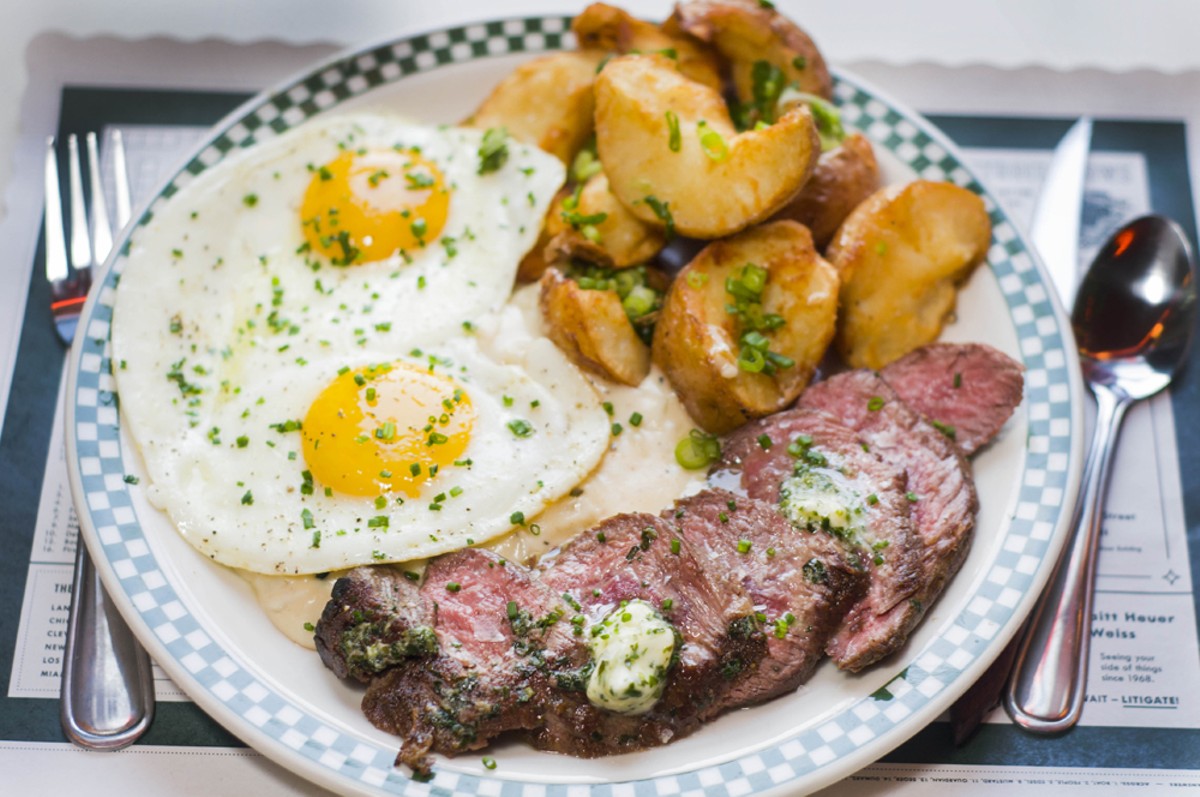 Recently opened Pernoi by chefs Takashi Yagihashi and Luciano DelSignore of Slurping Turtle and Bacco, respectively, is one such spot. Magnet, the latest from Takoi's Brad Greenhill that just opened in Core City, is another. And just before them, Lady of the House's Kate Williams launched Karl's, an American diner concept in the second story of the Siren Hotel in the recently renovated Wurlitzer Building.

Karl's menu is short-but-solid, with chef-driven versions of simple, classic dishes built with impeccable sourcing and a dose of creativity. It's a departure from what Williams has going at her first place, but such a concept is always a crowd-pleaser when done right, and Karl's does it just so. The ham sandwich, for example, is a Detroit diner staple, and here it's stacked with the incredible hog from Jake's Country Meats. It's essentially the same as the well-loved ham at Lady of the House, though LOH uses pork butt while Karl's uses cuts from the shoulder. The pig arrives between two pieces of white bread with housemade pickles and two kinds of mustard — a dijon and a blend of yellow mustard, butter, and dijon. It's excellent.

Similarly, the steak and eggs are a giant plate filled with two eggs and super tender and tasty teres major beef from western Michigan's Cover Crop Ranch, and it's likely the highest quality steak that you'll find next to a pair of sunny-side-up eggs. The dish is filled out with a generous helping of fried redskin potatoes and a milk gravy made with sweet Vidalia onion, roux, rosemary, cayenne, and a finish of sweet sherry. Mix and mash the plate's components for some of Karl's best bites.

Beyond the ham sandwich, Karl's builds a fine patty melt with Cover Crop ground chuck, American cheese, pickles, and onions — but not the caramelized onions that are standard on a patty melt. Instead, chef de cuisine Brennan Calnin says Karl's is going for a lighter, brighter take on the sandwich with onions pickled with a little sugar, salt, lemon juice, and zest. The "grilled cheese of the day" was made with mushrooms and Swiss chard that's cooked down with Left Hand Stout beer and put between two slices with provolone. That arrives next to an excellent cup of thick tomato soup for $6 more.

Karl's bills its chicken salad as "the best around," and it makes a good case, though I'm not particularly a connoisseur. It roasts its bird in-house, then mixes it with green apples, house mayo, fried shallots, balsamic dressing, and fish sauce for what Calnin characterizes as an "east meets west" salad. A small mound is served with bread with which one can build their own sandwich.

The attention to detail extends to the sides. During the menu's development, indecision over creamy or vinegar-based coleslaw led to a compromise — a little of both. Karl's lets its cabbage chill with salt for a couple hours before it's rinsed, then mixes dijon, a small amount of mayo, and celery seed. The fries are dusted with a seasoning that's equal parts sugar and salt, as well as thyme and red pepper flakes. It arrives with a fry sauce made with housemade mayo, house steak sauce, lemon zest, and a few other things. All awesome. House-made pickles rotate, but are the bright and crunchy refrigerator variety. A recent week's offering was a punchy radish and wakame.

Karl's also offers several salads, including a wedge salad that's almost cartoonish in how giant and busy it is. It sits in a small pool of dressing with blue cheese and is ringed by halved cherry tomatoes, then crowned with fresh sprigs of dill and thin slices of red onion. The whole package is dusted with everything bagel seasoning.

Perhaps one dish that doesn't seem to fit in with a menu full of traditional diner stapes is the seafood boil, which arrives in a small pot filled with corn on the cob, redskin potatoes, and shrimp in a super flavorful shrimp broth made with beer and Old Bay seasoning and butter. Calnin notes that it's diner fare in spirit, and he's not wrong.

Karl's super-thick chocolate shake is made with Guernsey's ice cream and enhanced with chocolate sauce and whipped cream. The full bar stocks a short list of craft beers, offers a boilermaker menu, and mixes some of the classic cocktails.

It's hard to find much in the way of flaws in Karl's operation, though if it has anything working against it, the location is a bit of a difficult journey for anyone who doesn't live downtown. The Siren Hotel is beautiful, but finding parking in that part of downtown is a pain. But, alas, Williams' restaurant is worth the extra effort — it's that good.