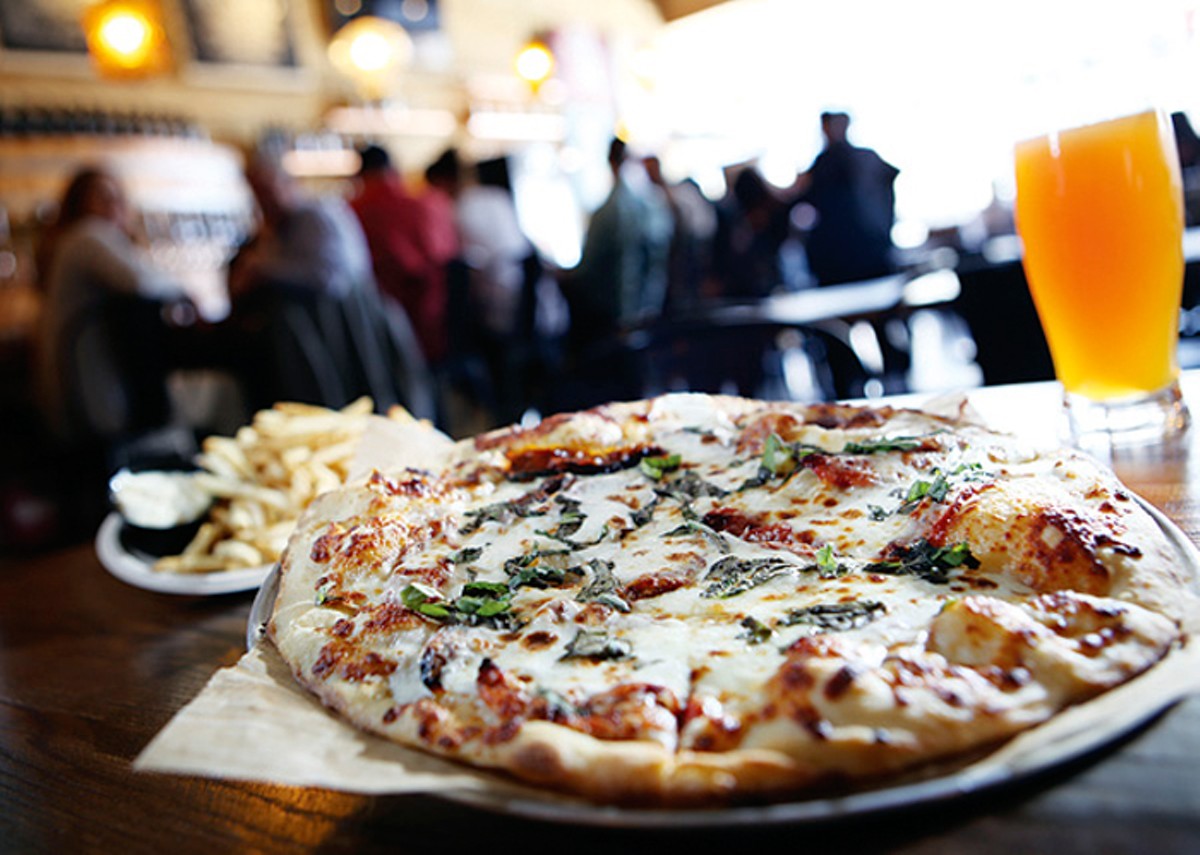 To open a franchise of a brewery-empire-turned-pizza-restaurant across from the now-venerable Motor City Brewing Works seems a directly competitive move. Perhaps the now-hip Midtown crowd is finally big enough to draw some real market positioning for its young, trendy dollars? The gauntlet long left on the center stripe of West Canfield Street has, bravely and confidently, been taken up by Jolly Pumpkin, whose outsider image belies quite the empire of beers and taprooms, rather universally successful.

Here it is, well-documented by the local media, sandwiched between the Cass-Canfield Dog Park's Shinola clock and the Shinola store, and who would have thought it 20 years ago? Canfield has been slowly annexed by the new realities of Detroit: new businesses coming to join the stalwart Traffic Jam and Motor City Brewing Works. On a spring afternoon, the streets of Midtown are lively, filled with students and parents, city folk and suburbanites, sports fans and beer snobs.

It's a simple concept, in that it's the same walk-up counter service that you find in a fast-casual restaurant. That is to say, there are a bunch of tables up for grabs, and a queue for two registers where friendly, if sometimes rushed and quiet, cashiers take your order. They'll hand you a numbered placard, which will guide your food to you when it's ready, usually within five to 10 minutes. It's almost like Jolly Pumpkin's concept has been tailored to a college town — which, looking around, is kind of where you are: University Tower is just out the window, after all, and the apartments all around are full of students. There's a vibrant culture here that tends to eschew the trappings of convention in deference to ease and efficiency. It works, mostly.

The interior is clear and warm, well-lit during the day, thanks to a front wall composed mostly of windows. Examine the chalkboard menus above the kitchen, and stare a little bit at the reclaimed pallet wood on the walls (16,000 linear feet apparently,) the vintage chandeliers with their avocado and amber glass shades, and the canvases of Jolly Pumpkin bottle art that shape the visual identity of the place. There's a lot going on, which is good when you're drinking, right? It's distinctive and fun. Yes, there are also a few TVs, if you're there to catch the game.

Of course, if you're turned off by the line, you can sit at the bar and be served more traditionally by a bartender. It's fun to watch them work the 32 taps, alternating groups of Jolly Pumpkin and North Peak tap handles, encompassing a bewildering array of regular drafts (a pair of chalkboards lists those available and out of stock) mixed with specials (on another set of chalkboards, handwritten and struck out as they go.) Briefly, Jolly Pumpkin's offerings are largely farmhouse, sour, or wild beers, each of those terms referring to the traditional styles of their fermentation, unique yeasts yielding a sourdough sort of complexity in the finished beer; North Peak beers, by contrast, are dominated by their love of hops and clarity of flavor, broader in their appeal. They're both great offerings, and many bartenders will happily debate favorites with you in your quest for the perfect beer.

A second primer: Beer has a natural affinity for pizza. We in Detroit have known this for ages, evidenced as much by Buddy's and its nationally recognized stature as the ubiquity of greasy bar pizza, with its regrettable deliciousness. Cheese and rich flavors are cut through by cool, carbonated, slightly bitter liquid; the stronger your flavors within the crust, the stronger or more idiosyncratic your beer choices can be.

Gazing into the kitchen area, our initial distrust of a conveyor oven turned out to be unfounded: Toppings are well-caramelized but not burnt, and the pizza's crust ends up remarkably sturdy despite its relatively thin profile. "The Pork Pie" is a particular testament to this: bacon, pepperoni, and sausage are generously loaded onto a crust with mozzarella and a sweetly concentrated charred tomato sauce; shaved onion and garlic and red chili flakes provide a vital sharpness to offset the rich complement of pork products. It's fatty and delightful, and the pieces, if eaten before too terribly long, are perfectly level without need for extensive folding.

Feeling slightly less decadent and pork-centric? How about the "Fire and Smoke," with chipotle sauce, roasted peppers, smoked chicken, and smoked mozzarella, freshened up by scallions and basil? Again, a remarkably enjoyable pizza on a crisp crust. A cursory examination of the dining room at lunch or dinnertime reveals that the pizzas here are popular, and thoroughly enjoyed by all who try them. Smalls feed one or two, larges two or more depending on the group dynamics in play. Get a few small pizzas to share and try. They're thoughtfully constructed complex flavor arrangements with a few well-utilized ingredients.

You're burnt out on pizza you say, because you do (let's suppose) eat a lot of it? How about a sandwich, then? There's a nice selection, all tempting in their own rights. Try the short rib sandwich: ciabatta, garlic slaw, fontina cheese, black pepper aioli, shaved red onion. The sweet-savory balance is well-matched and met by the acidity of the onions, the cheese and aioli, and the fatty splendor of meat coming together marvelously. This is really good bar food, done with some cleverness and skill. How about a vegetarian sandwich to tempt the carnivores? Look no further than the warm artichoke sandwich, a play on the many vegetables that we take for granted as condiments or second fiddles — artichoke hearts, pepperoncini, roasted red peppers, and a "chickpea spread" and turns them into a sandwich in their own right, with some killer olive bread and goat feta.

When the place is busy, all bets are off when it comes to seating. Stake a claim while one of your party is in line. Confer on your choices and don't abandon a seat for too long, lest someone with less patience or courtesy decide you've departed. So long as the spirit of camaraderie and the jolly nature of the place reign supreme, there shouldn't be much trouble. Parking's still a bit of a hassle in Midtown, but that's hardly their fault: Just be ready to walk or shell out a bit of money, depending on your preferences.

Jolly Pumpkin's entry into Detroit may mean a lot of things about what's happening in our city. There's commentary on the business climate, concerns about the small-producer alcohol industry's volatility, hopes for revitalization. (We hope conviviality prevails on Canfield, for the benefit of all.) At the most simple, though, it means this: There's a great new place to grab lunch with your mother, dinner with your friend, drinks with your lover, or pizza with strangers.