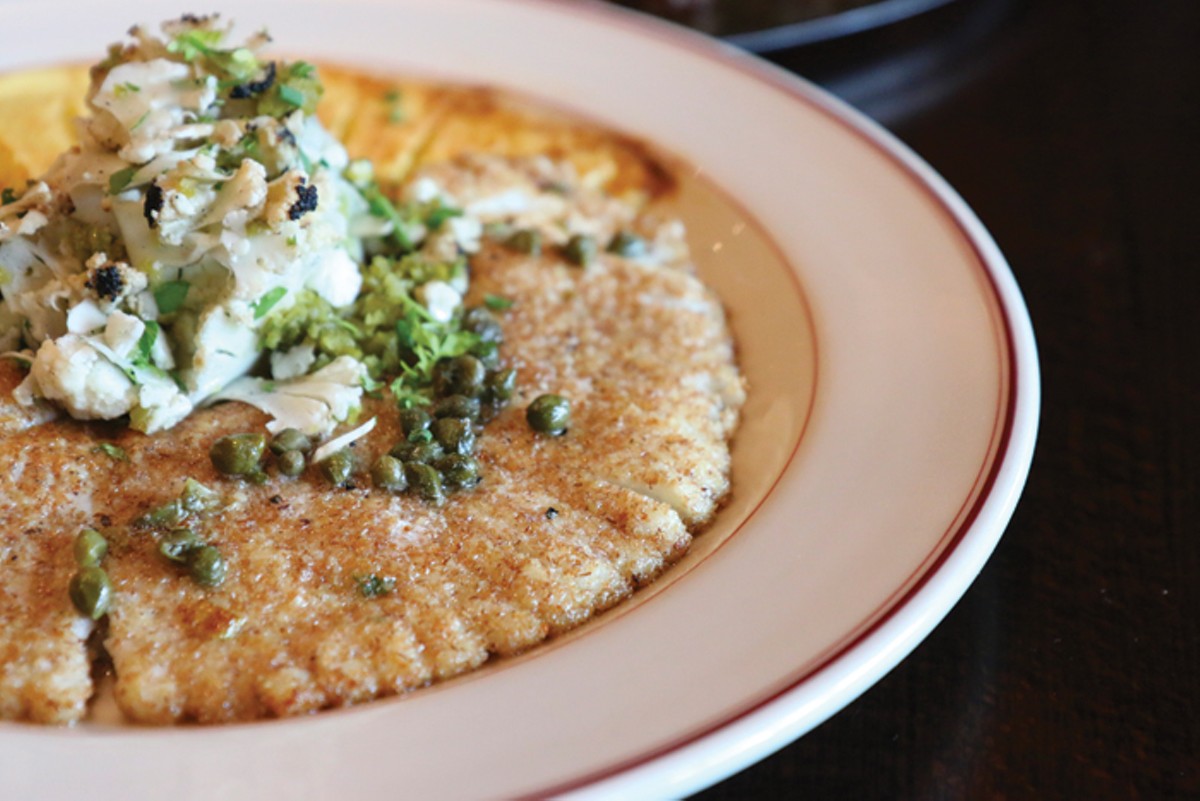 As far as brasseries go, what you want to look for is style, energy, a varied menu that utilizes French techniques, and a cocktail list with the creativity to match the cuisine. In metro Detroit, you'll find that fine balance in Birmingham at Au Cochon, under restaurateur Zack Sklar's watch. Sklar is behind the growing Peas & Carrots Hospitality group. His portfolio includes Social Kitchen & Bar, Mex in West Bloomfield, Beau's Grillery in Bloomfield Hills, and Bernie's Lunch & Supper in Chicago's River North.

Au Cochon is among Sklar's latest ventures, and the focus is on providing a dining experience that's as equally exciting as its drink list. Walk in and you're greeted by images of regal-looking portraits of Bill Murray, Christopher Walken, Jean-Claude Van Damme, and others. The bar is the showcase of the interior, but there is ample four-top and high booth seating for parties wanting to face each other. The space splits in half and shares itself with the still-newer Arthur Avenue, an American Italian concept, separated by paned windows (also a Peas & Carrots production). The two also share a kitchen and executive chef Mark Barbarich.

The interior is dominated by dark wood accents, white and black tile floors, rich, red booths, as well as Ford pickup truck tailgates repurposed into seating — all of which, when combined with soft lighting and jazzy, Prohibition-era music in the background, give guests a welcoming, laid-back vibe.

The place can be lively during the evening, but not overwhelming, — you won't have to talk over the noise. This is also helpful in that you don't necessarily have to worry about making reservations, especially during weeknights.

Au Cochon marks Sklar's fifth restaurant as part of his dining empire. In the last four years, the Culinary Institute of America alum has built a reputation for conceptualizing upscale yet approachable restaurants, and Au Cochon is no different. He brought Barbarich over from Mex to help design the menus for both Au Cochon and Arthur Avenue. At Au Cochon, the focus is on simple, French classics, with an American twist.

Classics are found in the frog legs swimming in a garlicky, rich herb sauce, or the thick, juicy, and tender flat iron cut of meat prepared sous vide to lock in the flavor, along with a red wine demi-glace. The protein is stacked high with crispy, addicting shoestring fries that go with a tart aioli sauce. And then there's a heavenly serving of fromage blanc, drizzled with truffle honey, lemon, and toast points.

The twist comes in the form of the many starters, sides, and entrees, including the tots and curds that sit on top of a horseradish sour cream, the cheeseburger with American cheese, aioli, onion, and pickle, and our favorite, the bacon. Short of having a friend whose hobbies including butchering pigs, you'd be hard-pressed to find cuts of bacon so thick and delicious. Served on a silver platter, each slice comes about a quarter to half an inch thick, and has been glazed with vanilla bourbon, giving off a perfectly delectable balance of salty, fatty, and sweet. While the bacon craze has come and gone, Barbarich has managed to turn his into a staple, which we'll see prominently featured later on in the menu.

If you're looking to drop some serious cash, you can't go wrong with the ribeye for $48. What you'll get from that selection is an impressive slab of beef at 24 ounces, also prepared sous vide with a red wine demi-glace that comes out tender. If you're looking to keep it simple and classic, the roast chicken, with a delicately lacquered skin and served with roasted carrots, is an option that won't disappoint.

We also sprang for the skate meuniere, a light, mildly sweet fish that belongs in the stingray family and has the consistency of both a white fish and a scallop. Here, it's prepared in a traditional French style, lightly seasoned, with capers, a splash of lemon, and topped with thinly sliced charred cauliflower that almost serves as a relish. The skate is spread out to show off its wing, along with the side of duchess potatoes, which is also fanned out to complement the ray.

On to dessert, and we return to our friend, the bacon. It's found candied and crumbled atop the sticky date cake, along with generous dollops of chevre whipped cream. The cake has a subtler flavor to it — it's not overly sweet, and is quite dense, enough in fact to be easy for sharing. With the slight tartness of the cream, the smoky, sweet crunchiness of the bacon, and the nuttiness of the dates, it's an unexpected treat for a French eatery.

Service is more or less prompt and the servers knowledgeable. Again, the place is trying to give off an approachable feel, nothing snooty, so don't be afraid to ask questions about items you may be unfamiliar with.

A breakfast/lunch menu offers some of the same (including a variety of salads found on both menus), but also a matzo ball soup, frites with fried egg and gravy, steamed eggs, caramelized grapefruit, and whole grain yeasted waffle, and other brunchy-style options.

As for the bar, you'll be handed a cocktail menu that resembles a passport, each page with a different kitschy illustration to go with the description of the drink. We had fun mixing and matching entries, such as the Breakfast of Champions, with 100-proof bourbon, aperol, orange marmalade, aromatic bitters, and lemon expression ($13), and the Holy Smokes Batman, made with pisco, lavender, lemon juice, mezcal, and ginger root ($15). There's also a full wine list, with 6- or 9- ounce by-the-glass options that range from $10 to $32.

We were thoroughly satisfied with this Birmingham option, and are interested in seeing what comes out of the Italian side of the kitchen next time at Arthur Avenue.