Though Detroit doesn't hold the sizable population of Jamaican transplants that you'll find in New York City or Toronto, the northwest part of town is where to go to taste intensely piquant dishes redolent of allspice and garlic; thyme and scallion; scotch bonnet and ginger; and all the other components of the tropical nation's flavor profile.

That's where restaurants like Jamaica Jamaica and Rono's started trading in jerk chicken 35 to 40 years ago. Caribbean Citchen, a fast-turnaround space, is in its 17th year. Others came and went over the decades, while Mama Rose at Jamaican Pot started building up a reputation for healthy, fresh Jamaican fare in 2014. On Livernois, Mama Nezaa Bandele is planning to turn her vegan Jamaican-inspired food company Paradise Natural Foods into a brick and mortar restaurant, and several grocery stores selling Jamaican and Caribbean foods are scattered throughout northwest Detroit.

While the restaurants do strong business, it can be difficult to get a clear sense of the Jamaican community here. Some of the restaurateurs tell me their families arrived 40 years ago in search of auto plant jobs. Others joined family members already in the city, and some landed in Detroit by accident. Many of the subsequent generations remain, and it's a proud if relatively small part of Detroit. Owners say the restaurants' customer base is largely composed African-American and Jamaican folks living in the nearby neighborhoods, though people from other groups sometimes stop in. So why isn't the Jamaican food community yet a region-wide treasure and attraction? That's a result of several things, but Bandele theorizes it's partly because Detroit lacks a true sense of multiculturalism, and Jamaican culture isn't a part of the city's fabric quite in the same way that it is in other cities. "The culture of Detroit is 'Detroit,'" she says, stressing that that isn't a negative thing. She was born in Jamaica and raised in Toronto, a truly multicultural city, and says exposure to other cultures' cuisines as she grew up informs her recipes and worldview.

Likewise, Detroit impacts our city's Jamaican dishes. Bandele and other restaurateurs say a lot of the Jamaican food we eat here is what you'll find in Kingston and Portmore, but the tastes and flavors of the city's African-American population worked into some of the dishes to produce what Bandele calls "Jamerican" food. BBQ jerk chicken — a marriage of jerk and barbecue — is one such example.

Each restaurateur we spoke with says their most popular dishes are the jerk chicken and Jamaican oxtail, while the curry chicken is also a regular go-to. They're a safe place to start, but it's tough to find bad plate of Jamaican food in Detroit. Here's what we tasted:

Owner Elaine Dammar set up in 1994 near Wyoming Avenue and McNichols Road, largely trading in carryout with quick turnaround at her small shop, though the dining room holds a few tables. Of all Detroit's Jamaican restaurants, Caribbean Citchen is most liberal with the fiery scotch bonnet pepper, resulting in the spiciest versions of jerk chicken and oxtail. The oxtail stands out, though be sure to get an extra cup of gravy. Dammar serves large portions of both atop of a heaping serving of semi-sweet red beans and rice with a side of plantains and steamed cabbage. Cakes are big in Jamaica, and Dammar offers several slices along with a line of Jamaican pops and juices. 10500 W. McNichols Rd., Detroit The jerk chicken and oxtail pack an incredible amount of flavor — you won't go wrong there. But owner Richard Lawrence's menu's standout is the aromatic curry chicken. Hunks of falling-off-the-bone bird arrive under a thick blanket of curry sauce with onions, carrots, tomatoes, and just the right level of heat. That's accompanied by heavily seasoned beans and rice and a nugget of fried, sweet festival bread. Everything is around $10, so be sure to save money to explore Lawrence's impressive cake department for a dessert. His father opened the location 40 years ago, making it the oldest of Detroit's Jamaican restaurants. 17550 W. Seven Mile Rd., Detroit

Rono's first opened in Detroit 35 years ago and moved to its current location on McNichols Road near Schafer Highway in 2007. For the moment, it's carryout-only as the Rono family undertakes a renovation of the dining room.

If you're going, you'll want to get the Jamaican oxtail. The tender meat and semi-gelatinous fat stewed in a brown gravy slides right off the bone and is among the city's best oxtail dishes. Rono's does their take on jerk chicken with half of a smoky bird chopped up, and both come with the requisite red beans and rice, and cabbage, which have a bite here. For dessert, get the coconut drop — essentially coconut brittle — and Rono's bottles its own pink lemonade. 14001 W. McNichols Rd., Detroit 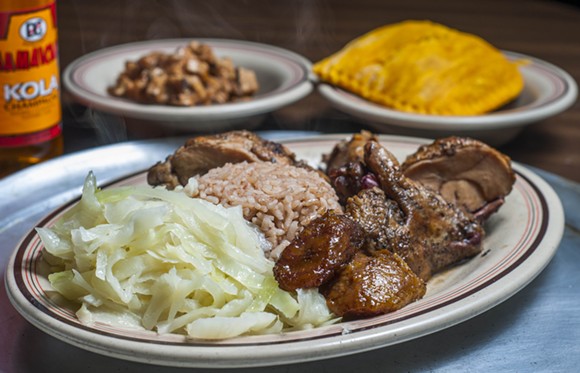 Mama Rose at Jamaican Pot launched her small carryout spot on Eight Mile just east of Greenfield Road several years ago, using all fresh ingredients and preparing what could be some of the city's healthiest Jamaican fare. Her jerk chicken is chopped up into small, off-the-bone pieces, and arrives on a mound of beans and rice. Notably, the Jamaican Pot's steamed cabbage somehow remains crunchy and is complex for such a simple side. Also among her top dishes are the curry goat and the fricassee chicken with veggies in a brown gravy of garlic, onion, scallion, and thyme.

Notably, Jamaican Pot is vegetarian-friendly. Check out the Bob Marley — a mishmash of red beans, butter beans, scallions, carrots, and other root veggies that's hit with a healthy serving of an intense gingery sauce and served over white rice. Rose also offers a full line of desserts like the Upside Down Pineapple Brownie, coconut drop, and fresh juices made by Island Farm. Look for a new Jamaican Pot location that's in the works in Madison Heights, and check the Jamaican Pot's website thejamaicanpot.com for more info. 14615 W. Eight Mile Rd., Detroit 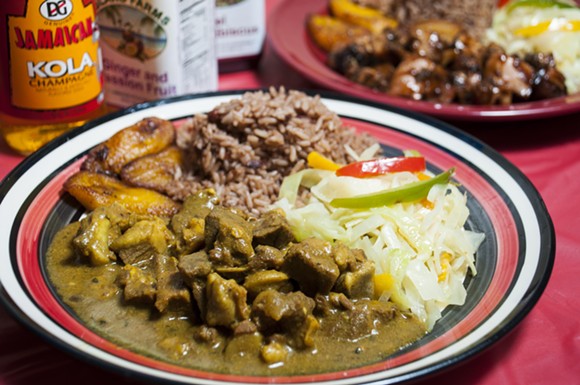 It's not a brick and mortar yet, but Bandele is planning Paradise Natural Foods into Paradise Café & Juice Bar in a space at 19164 Livernois Rd. She says to expect real homemade Jamaican drinks like ginger brew, sorrel, and sea moss. For dinner, the jerk barbecue veggie patty made from black eye peas with a house sauce is one of Bandele's highlights, and she says the peach mango cobbler will offer "a nod to African-American and Caribbean cultural mash-up." See facebook.com/ParadiseNaturalFoods for more info. 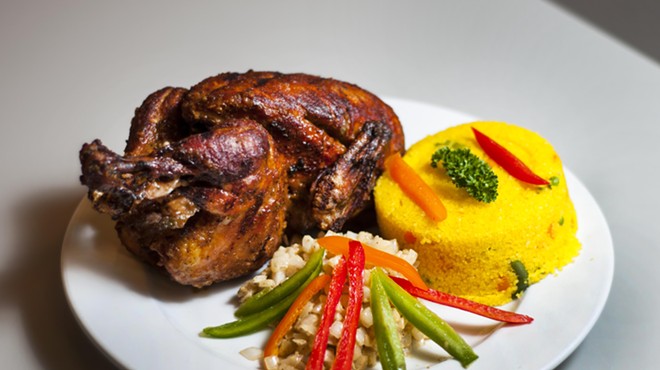