A parade of stars at Lucy and the Wolf 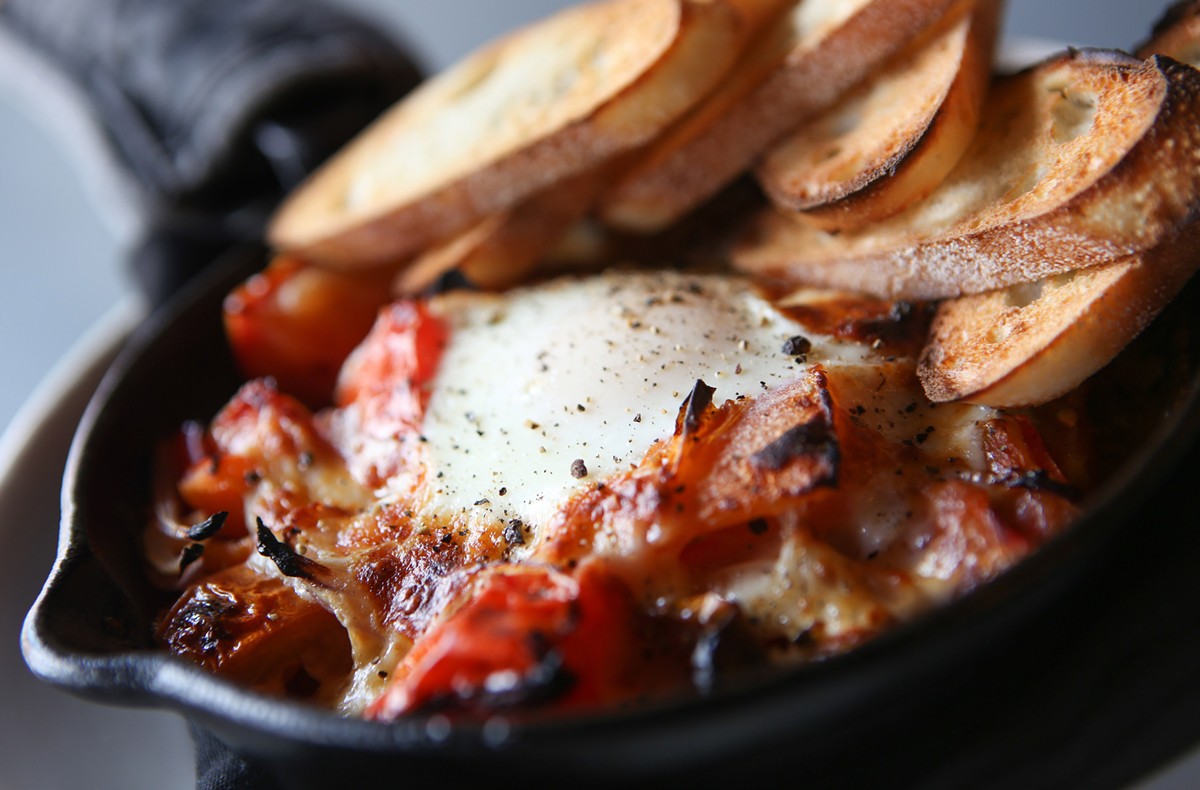 Another small-plates place with exquisite food! They're everywhere now: Wright & Co., Selden Standard, Café ML, Chartreuse, and some of us remember the original Small Plates, which opened downtown on Broadway Street 13 years ago. The idea was original enough then that it made sense to put the concept in the name.

I'm guessing that chefs like the small-plates concept because they bring the dishes out in whatever order works for the kitchen — no need to sweat getting a whole party's table-full of entrees and sides ready at the same moment. And diners like it because they can range more widely over the menu at a single visit. If you don't love one item, there's another coming soon.

Not loving one item is not likely to happen at Lucy & the Wolf, however. Every dish in both the "Chilled" and the "Charred" columns is carefully crafted. Chef and co-owner Brandon Wolschleger uses a variety of sauces from all over — ponzu, harissa, remoulade, sofrito, aioli, romesco, chimichurri — to bring out the flavors of top-flight meats, seafood, and vegetables.

Wolschleger is also experimenting with the concept of "aged cocktails." The ingredients are mixed and then aged in oak barrels for at least two months: a classic Manhattan, a Negroni. Carbonated, bottled cocktails are next — though besides portability, I don't see the advantage to the consumer. For now, normally produced concoctions are on order, styled for summer, such as the John Genitti, with Limoncello, or a ruby daiquiri with pink grapefruit juice and rhubarb. We tried a cucumber margarita — cuke-infused tequila, lime juice, and simple syrup — and found it infinitely refreshing.

Wines are conveniently and economically available by the half-bottle ($18) as well as the bottle and the stemless glass. Both white and red are categorized as "classic" or "fun," the latter meaning, said our server, "different."

Plate portions are not all that small; they're decidedly shareable. Two per diner should be plenty and there are many choices for non-carnivores.

Among stiff competition, I'll pick as standouts Chimichurri Flank, Roasted Clams, and Tomatoes in Cast Iron. The steak is the best that beef can be, making the simple chimichurri (parsley, oil and vinegar, garlic, and oregano) almost unnecessary. A corn relish on the side is infinitely fresh, and a little heap of pickled shallots adds a tiny bit of bite.

Roasting a clam apparently plumbs its best and briny depths; ask for more grilled bread to sop up the salty juice. And you already know what roasting does to tomatoes; in this case heirlooms are enhanced by cheese curd and a self-cooked egg. Each of the three seems to bring out the best in the others.

Also excellent is lusciously fatty pork belly, perfectly charred without, but be warned that the bed of cabbage with Chinese mustard that it sits on is somewhat overpowering. Those used to ceviche made with tilapia will be startled by the richness that ensues when it's done with scallops, and the chef tarts the dish up with blood orange as the citrus, and a scallion confit — sublime!

Smoked salmon is top quality, served on a warm baguette with a mound of onions braised in wine. Shrimp is grilled, then chilled and served with a smoky, citrus-y ponzu and, my favorite, cilantro.

A good variety of dishes are more like salads or sides (unless you're vegetarian). Fingerling potatoes are pretty ovoids served with a deep sofrito, bright red. Panzanella, that essentially summery Italian bread-and-tomato salad, gets it just right: The baguette is not soaked but neither is it crunchy, and a very dry feta gives the dish balance.

A lentil salad braises the tiny legumes to just the right degree of firmness and garnishes them with a fashionable smear of harissa vinaigrette (smears are a theme here, as in every trendy place).

For the budget-minded, Lucy and her lupine partner offer tacos at $3 or $5. I can't say anything nice about a flour tortilla, ever, but the ingredients of my portobello taco were glorious, somehow minty and earthy. Other choices are flank steak (see above for how good that is) and "seafood."

Having opened last month, the chefs haven't yet filled out their dessert menu. It promises both a root beer float and a Dusk Flip — Irish whiskey, cream, egg, nutmeg, blackberries — sounds to be worth a trip to Northville all by itself. Available now is a wild berry cobbler to share, with housemade biscuits, served warm and very generously.

I'll admit that I sometimes miss having take-home when I visit a small-plates place. But at Lucy & the Wolf, the experience of the moment is so grand that it's enough to eat it just once.

The restaurant's memorable name, by the way comes from the surnames of the co-owners: Mishelle Lussier, who also owns Northville's Table 5, and Wolschleger.