Lucifer in the Rain - Time No Place 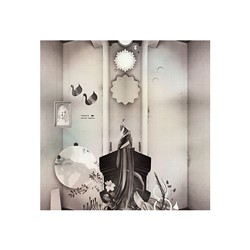 Zoos of Berlin’s new album might leave more than a few ooh-and-ahh impressions upon its listeners — the trappings of what’s typically perceived as “artsy” stuff. The whispery lilt of its harmonized lead vocalists might suggest a chandelier-lit waltz, dreamy echoing voices pitching woo upon the ballrooms of Bowie — or maybe Scott Walker.

Rewarding those who are listening with snug headphones, the tracks risk getting a bit heady until some tight, punchy percussive deployments invite the feet to tap, and ease the hips to shake kicking along with the playful verve of electric pianos.

There’s pop-hooks, in the traditional sense of the more fun, frolicked tropes of rock music, but this local quartet notably takes their time in the studio and everything lands on a dime; it may bob and weave but it also swoons and soars.

It almost feels like plush red velvet curtains should be raised up to unveil Track No. 1 of this album: Sonic textures and a slather of tones, delicately distorted, thrum together in such an exquisite manner that you might feel carried off on a cloud to a Neverland of re-imagined art-rock.

The band dazzles with its own inventiveness in the genre, tinged with an graceful blend of nightmarish dread, or some other kind of groovy gothic allure, under jaunty, gurgling synths and drums, invariably kicking a driving rock rhythm — or an anti-disco shuffled march. They fully use that zingy, spacey Roland keyboard under dreamy distorted guitars, indelibly intricate, jazzy rhythms and gauzy croons, sublimely-harmonizing their waking-dream poetics