You can catch a Garth Brooks concert at a metro Detroit drive-in... for $100 a car 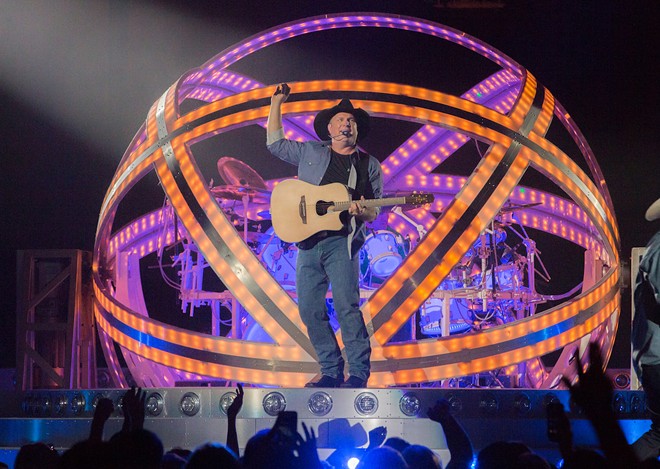 When best-selling U.S. solo artist of all time Garth Brooks rolled through Detroit this year with a massive sold-out show at Ford Field, he managed to piss off the snowflake set when he wore a jersey of former Lions' running back, Barry Sanders, which was mistaken for an endorsement for Sen. Bernie Sanders' 2020 presidential bid.

Well, country's bad boy is back. And by “bad boy” we are not referring to Brooks' broody Australian late '90s alter ego, Chris Gains, which was basically a convoluted Andy Kaufman/Tony Clifton stunt. (He even released a record and gave Gains a backstory in which Gains gets in a car accident that leaves him looking like a disfigured, overweight, white Prince lookalike with a soul patch and a sex addiction.)

Anyway, Brooks will appear on screens at 300 drive-ins across North America, including several drive-ins in Michigan. Among the chosen theaters are Lake Orion's Canterbury Villiage Drive-in, the Ford-Wyoming Drive-in in Dearborn, Hi-Way Drive-in in Carsonville, and Flint's The New US-21 Drive-in Theater.

Don't expect to roll up and pay standard movie ticket admission because the price of these tickets could basically get you a reasonable nosebleed seat at a real-life concert. For $100 per car — so as long as every passenger is seated — you can watch Brooks shake his 58-year-old ass from the comfort of your Hyundai Sonata.

Tickets go on sale Friday, June 19 at noon via ticketmaster.com/garthbrooks.