Queen Lillian and The Platform
Rendering of Woodward West.

A large, long-vacant lot on prime real estate along Woodward in Midtown is about to be transformed into a five-story apartment building with ground-level retail.

The Detroit-based developers, Queen Lillian and The Platform, announced Thursday that work has begun on the $60 million project called Woodward West, which is slated to include 204 apartments and nearly 25,000 square feet of ground level retail on Woodward at Stimson, just south of Martin Luther King Boulevard.

About 20% of the apartments will be offered below market rate as affordable housing.

“We are proud that this is a project not only for Detroit, but built, designed and managed almost entirely by Detroit-based companies,” James Jenkins Jr., co-principal and partner of Queen Lillian, said in a statement. “We believe that as Detroit continues its comeback that Detroit-based businesses should be leading that charge.”

Construction comes less than a year after the opening of The Platform’s ambitious project, The Boulevard at Third Avenue and West Grand Boulevard in New Center, a 231-unit mixed-use building.

“The strong leasing at The Boulevard, even amid the COVID-19 crisis, demonstrates the demand for more new housing and retail in our city,” Peter Cummings, executive chairman and CEO of The Platform, said. “Woodward West will bring centrally located housing to Detroiters and much-needed retail space to the Woodward Corridor in Midtown. We are proud to work with the Queen Lillian team to make this catalytic development a reality.”

Woodward West is being built on 1.85 acres and will include an outdoor roof deck with views of downtown, a theater, a fitness center and wellness studio, sauna, business center, pet wash station, bike storage, electric car charging ports and other modern amenities. The lounge areas will include TVs, fireplaces, and kitchenettes “to encourage a sense of community among tenants,” the developers said.

A goal of the developers was to ensure residents weren’t displaced, said Christopher Jackson, co-principal and managing partner of Queen Lillian.

“Woodward West will ultimately serve as a great example of how development can be done while still maintaining inclusion and diversity,” Jackson said. “Further, we are proud that we are not displacing an existing neighborhood but, in fact, working with the existing neighborhood to bring quality, affordable housing and retail offerings to the community.”

"Woodward West is a great example of how we are rebuilding our city in a way that includes everyone,” Duggan said. “Not only are we seeing one of the last major vacant parcels on Woodward in Midtown being developed with more affordable housing, the project is being led almost entirely by Detroit-based businesses with two major black development partners in Jim Jenkins and Chris Jackson." 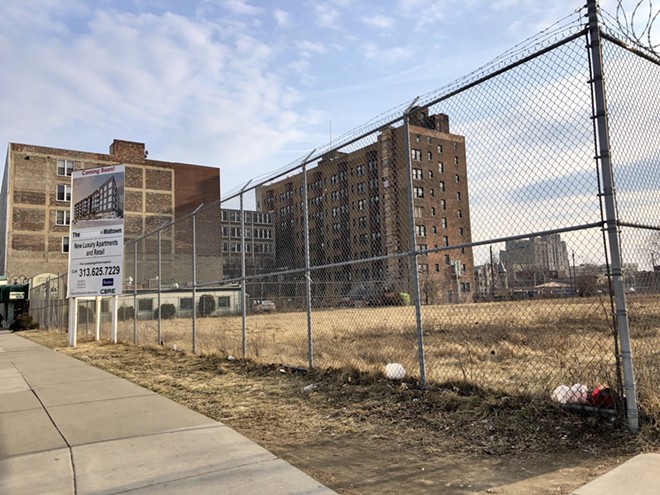 Steve Neavling
View of the vacant property in 2018.