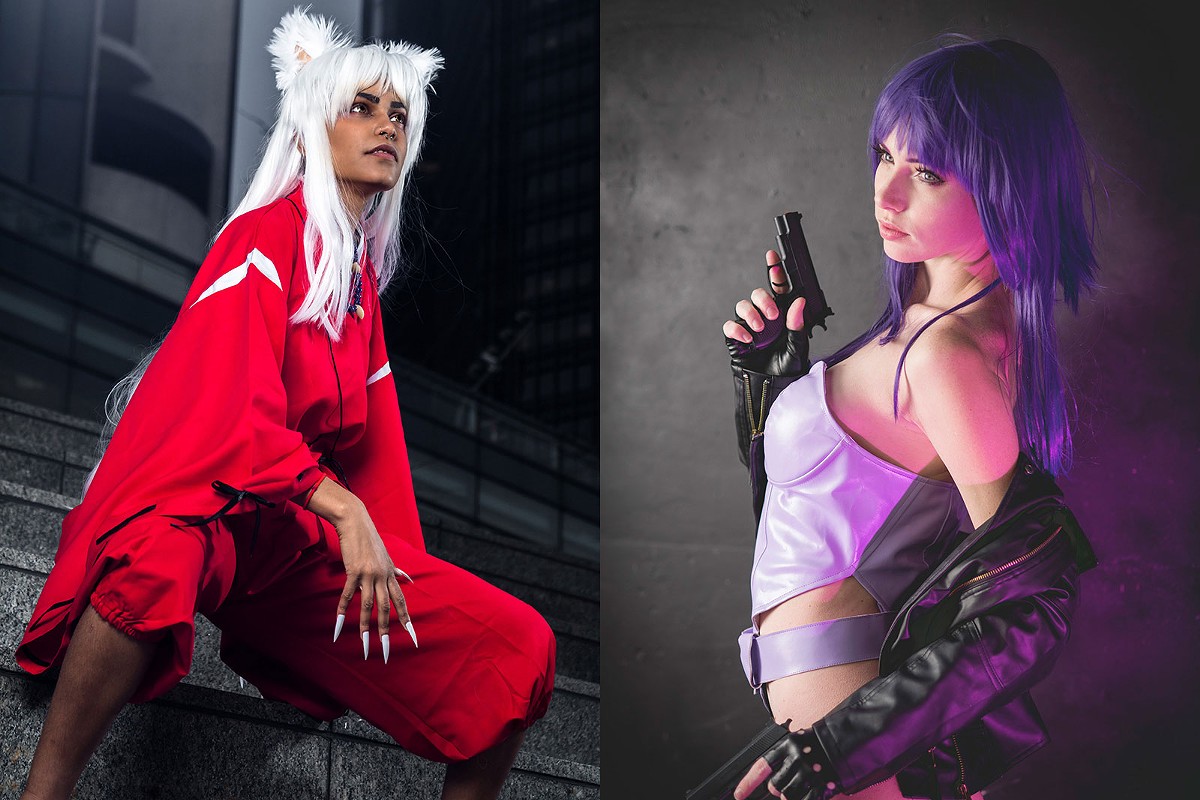 Cosplayers Wreck it Ronnie as Inuyasha and Starbuxx as Ghost in the Shell. From left: Ruffshot Photography | Courtesy photo

When 27-year-old Crystal Jeske first discovered Japanese anime it was, like for many other Americans, through Cartoon Network's late-night Adult Swim programming. Specifically, it was Inuyasha, a show about a time-traveling teenage school girl, a half-dog demon, and some highly desirable sacred jewel shards.

"We really aren't in Tokyo anymore, are we?" the series' protagonist Kagome Higurashi asks during the first episode, after finding herself transported to feudal Japan.

Much like Kagome, an outsider in her own country, passersby in downtown Detroit this weekend might find themselves feeling a little transported and disorientated themselves. Proof that anime's popularity is growing is the rise of large anime conventions like Detroit's Youmacon, now entering its 13th year. The sprawling celebration of animation, comics, and video games invites thousands of people from all over the world, many of whom will cosplay, or dress as their favorite characters.

Jeske says she went to her first Youmacon when she was a freshman in college. "Everyone was so nice and liked all the same things I did," Jeske says. "I haven't really looked back since."

This year will be Jeske's eighth time attending the convention. She refers to "Youma" as her "home-con" and cites its spacious accommodations, next-level 24-hour game room, and welcoming atmosphere for making it among her favorite of the more than a dozen "cons" she has attended nationally.

When it debuted in 2005 at the Troy Hilton, Youmacon drew an initial crowd of a little more than 1,000 attendees. This year, the event will return to the Renaissance Center and Cobo Center, and the three-day event is on pace to top last year's attendance record of over 22,000, making it the 10th largest anime con in North America.

As conventions like Youmacon have grown, so has the world of cosplay. "Cosplay has been one of those things that it started off with a handful of people, and usually these people would be featured during the costume contests at all these conventions," Youmacon founder Morgan Kollin told Metro Times ahead of Youmacon's 2015 iteration. "But more and more, people decided that they just wanted to dress up as their favorite characters, even if they weren't competing."

When Kollin — or, as fans lovingly refer to him, the "ConFather" — sought out to make Youmacon, he says his goal was to make it program-focused rather than an event to simply empty your wallet. "Most comic conventions these days are just a big dealers' row, where you come in there, all you can do is buy some stuff for a few hours and pay for a few autographs," he previously told us. "We offer more programming than a person could actually experience if they attended our event five times over."

In addition to events like Live Action Mario Party, Clara Cow's Cosplay Cup, and Youmacon Dance Competition, Youmacon also features a plethora of panels, some of which are hosted by celebrities, voice actors of popular series, animators, and writers. Many others are fan-operated and cover topics ranging from the ultra-niche (ie: "Long Long Ago, 20th Century: Showa Era Tokusatsu") to full-on crash courses on entire anime series, to more accessible discussions like the "Mythology of Miyazaki," "Playing with Power: A Nintendo Fan Panel," "Anime Trivia," or, for the thrifty cosplayer, "Cosplaying on a Budget."

But for many, the main event is cosplaying. While accuracy is of the utmost importance to most cosplayers when it comes to crafting or collecting their character's ensemble, ingenuity is key — as cosplay can be a costly hobby.

Jasmine Philips, a 28-year old cosplayer who hosts the "Cosplaying on a Budget" panel under the moniker Shockolate Energy, has tips for the frugal cosplayer. "I do a combination of things. I either make it, buy it, or thrift it," she says. "Or I go on Facebook groups and find cosplays for cheap. It's the challenge I love. I can still be me and embody that character. I can be a ninja, an idol, a Pokémon, a phantom thief, or even a fox."

The cosplay community has grown to support an entire bustling adjacent economy, as specialty props are at the heart of many characters' costumes and often require specialty retailers. A quick Etsy search will reveal troves of independent, convention regulation-ready weapon-makers, wig artisans, and armor crafters — many of whom rely on year-round con-culture as a sustainable living. Others, often cosplayers themselves, offer their services for trade or by commission through online communities or on-site at cons themselves.

"I like to cosplay characters that I connect with, although recently I have been making armor and I'm really enjoying it," Jeske says, who spends anywhere from 30 to 40 hours creating a costume, often spending $100 for fabric-based costumes and more than $200 for cosplays with specific components.

Youmacon panel host Cheyanne Kramer also tries to keep it cheap when it comes to her cosplay creations, spending somewhere between $50 to $200 per costume. She says this can be more if wigs are involved, and admits that she has been known to spend upwards of $1,000 on "frivolous things" while convention-hopping.

It's worth it, she says, for the sense of community it brings. "I pick costumes, for the most part, from series' that I love, and bring them to life my own way," she says. "Cosplay is a conversation starter, and I find when I cosplay from what I love, then I get so many meaningful interactions with others at these events. Sometimes we pick costumes to challenge ourselves. But for me, I pick my costumes mostly based on the series and the ability to interact with other fans."

The term "fan interactions" is recurring when talking with cosplayers, and something Kramer has studied at an academic level. As a journalism and gender studies undergrad, Kramer focused her honors thesis at Oakland University on women's bodies and representation within comic con communities. A fan interaction, she says, can be as simple as someone complimenting a costume or can be as involved as being asked for a photo.

"Personally, I love it when people ask to take pictures with me!" Kramer says.

Marilyn Palomino, a 20-year-old college student from Indiana, admits that the con culture can seem pretty intimidating from the outside, mainly because of how much there is to explore now that it has been made accessible through online communities and streaming services like YouTube. For Palomino, this includes a darker and less talked about side of fandom: A lot of superfans can tend to be loners.

"Some people have a hard time distinguishing reality from anime," she says. "Kind of like the addiction someone may have with sugar. It's a treat at first until it becomes part of your daily life. Now, there isn't anything wrong with watching anime every day, but some individuals create an association between pleasure and satisfaction with anime. It's all they know."

Palomino also addresses sexual harassment and the fetishization of cosplayers, which she says she has experienced firsthand. "I never go alone," she says of her con travels. "I usually take a Taser or pepper spray."

Palomino isn't alone in this observation, as Jeske agrees that what could be considered social imbalance cen be rampant in cosplay communities, especially in the cases where people repeatedly cosplay the same character. She goes on to suggest that in addition to difficulty with distinguishing reality from fantasy, it's not uncommon for cosplayers to forgo basic needs to support their fandom.

"They will pay to go to a con instead of paying rent or will work themselves ragged and not take care of their health," she says. Competition, she says, can also often bring out the worst in cosplayers.

"A lot of people get sucked into wanting to get 'cos famous,'" she says. "They will compare themselves and their cosplays against other cosplayers. Personally, that's a horrible way to go about it because it usually makes you feel bad and creates the tendency to want to tear down other cosplayers — which really isn't what our community is about."

The convention isn't only limited to Japanese anime: American movie, comic, and pop culture characters are also typically represented. Forty-five-year-old Matt Mattra says he was introduced to Japanese culture through a 1988 Nintendo game Golgo 13: Top Secret Episode, later discovering anime through Cartoon Network's Cowboy Bebop. But currently, Mattra is on a non-anime cosplay streak, as last year found Mattra parading around as the eccentric writer, actor, and director Tommy Wiseau. This year he will be attending his seventh Youmacon as Fred Rogers from Mister Rogers' Neighborhood.

According to Mattra, fandom lines have been blurred since con culture entered the mainstream. At one time, conventions stuck to their formulas. Comic lovers had Comic Con, fantasy role-playing gamers had DunDraCon, and people with multigenre interests had Atlanta-based Dragon Con.

Mattra's love of con culture comes from its accepting atmosphere, which wasn't the case when he was growing up. "I never heard of Youmacon until six years ago when I was at my club called 'Geeks United' at Macomb Community College," he says. "When I was growing up in the '70s and '80s, you were mocked and made fun of if you were a geek or a nerd. Nowadays you are praised or treated like a normal person of society."

At its core, fans say Youmacon is a celebration of community, and many refer to it as a "family reunion." Conventions allow fans to become the star, as thousands pull themselves away from their respective screens to slip into their second life — which, as Jeske says, often represents their truest self.

"Cosplay lets me put my energy into a final attainable product related to something I connect with," she says. "Plus, everyone loves being someone other than themselves for a while, right? Isn't that one of the reasons Halloween is so popular? You get the chance to let go of all your troubles for a bit and just embody a character. Most people cosplay characters that have attributes they wish they had. So, it gives some people a way to be who they want to be."