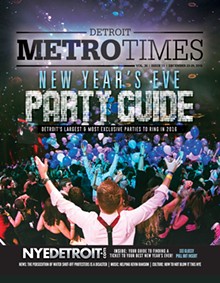 We received a number of comments on a recent news story by Curt Guyette regarding a group of activists who resorted to civil disobedience in an attempt to draw attention to Detroit's water shut-off crisis ("Judge calls Detroit's prosecution of water shut-off protesters a 'disaster,'" Dec. 23).

I'm sure when you make such a simplistic statement about a more complex issue, you are imagining every person who is experiencing a water shut-off is an able-bodied lazy person who just doesn't want to pay. But realize hundreds of senior citizens, many of whom worked all their lives and live in a minimal fixed income. And many of those people were robbed of their pensions by the city bankruptcy. If a person living off $700 a month and their water bill is 10 percent of their income, that doesn't seem right to me. Shouldn't they be allowed to pay based on their income? It's Detroit, Flint, and Highland Park today. But will this issue still be so simple to you when it's your city, neighborhood, and family?

Based on 41 years with DWSD, I know that a major cause of the high rates is the politicizing of water. It led to rape of the system and squandering of resources that dug it into a hole so deep that there is no way out. Many of those stupid practices go on today, and you can't blame the emergency managers for doing what was already a tradition and precedent and continues after they left. It's bad business practices have gone on so long that few remember that it was not always that way. If you don't enforce the rules, those who can pay won't. You have a right to dig a well or take a bucket to the river, but not to have it piped to you for free. Someone has to pay, and you are out of patsies. There are not enough philanthropists to bail out all the victims. There are no legal grounds for any judge to order DTE to provide free electricity to pump the water. The employees of DWSD are neither volunteers who don't need a paycheck nor slave labor. There's no painless way out of this mess. Stealing water only transfers the burden to another victim, just one you conveniently don't know or see.

Stop parading around with stupid signs and clean up the city making it inhabitable, and you may regain a tax base. Don't complain about a lack of opportunity if you don't show up for school or do the work, and instead of making protest signs, use those literary skills to tutor the kids struggling to do the work. Even in the EAA, one student passed proving it's not impossible if you try.

Detroit went into decline under mayors who acted more like its pimp. Who elected and re-elected those leaders who stole or squandered your tax dollars? Who elected those judges who make their court a circus? Do you show up to vote? Do you know who you are voting for besides a familiar name and pretty face? I testified for two days to the Detroit City Council regarding DWSD costs, and the public gallery was empty — not one sole citizen showed, not even one of these protesters was interested in learning how the budget was to be spent.

Thanks to Curt Guyette, pre-eminent Detroit journalist. Detailed and accurate from where I sit.

Guyette is on his way to getting a Pulitzer and more. His investigative journalism puts the "big media" to shame.

We also received a number of comments for our New Year's Eve Party Guide.

For starters, you can watch the MSU game.

Why go to Times Square? Detroit has it all. Or ... one could just sip champagne in a hot tub, in the middle of nowhere.

I'll have a sip of brandy and go to bed!