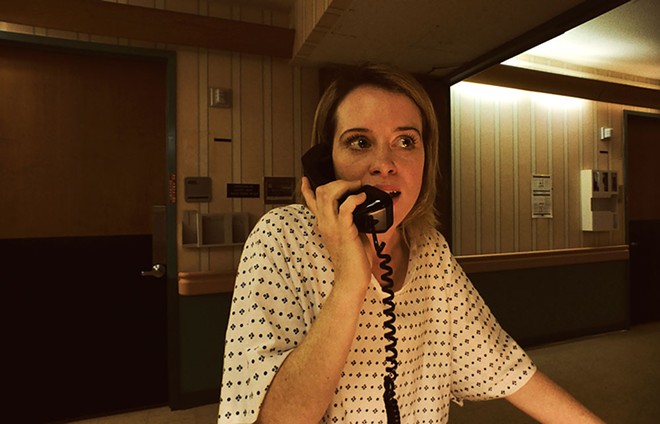 Director Steven Soderbergh announced his retirement in 2013, stating that he was frustrated with Hollywood, its focus on huge, (supposedly) safe blockbusters, and the subsequent squeezing out of smaller, more challenging films. He also said at the time that he felt that "movies don't matter anymore" as cultural touchstones. He unretired last year to give us the middling Logan Lucky, a blah imitation of his own Ocean's Eleven; if that movie was intended to make us nostalgic for those smaller films that the studios aren't interested in backing anymore, it failed. But Soderbergh may have found his groove again — or, rather, a new groove for a new movie environment — with the unusually unsettling psychological thriller Unsane.

As a piece of craft, Unsane is a smack in the face to what Hollywood has become in recent years, bloated with megabudget action fantasies full of impossible monsters and superheroes that demand armies of CGI grunts. Using off-the-shelf iPhones, apps, lenses, and drones, Soderbergh — who served as his own cinematographer, as he often does — shot the film mostly in one location, with a small cast and an almost impossibly tiny crew. They prepared not so much in secret as under the radar, because that's easy to do — it's almost inevitable — with such a small production footprint. Unsane's budget? A measly $1.5 million... which is almost the same dollar amount as Soderbergh's very first film, Sex, Lies, and Videotape, almost 30 years ago. And that was considered low-budget then.

Not that it's like Soderbergh whipped his cellphone out of his pocket and made a movie off the cuff. If you didn't know Unsane wasn't shot in a more traditional manner, you'd never guess it from looking at what ended up on the big screen. The movie does have a rough, edgy energy, one that is perfect for its story, but it is, I suspect, at least as much a result of the freedom that comes with not having a big corporation breathing down your neck as what kind of gear was used. (The quick-and-dirty filmmaking extends to the script, by Jonathan Bernstein and James Greer, which was written in 10 days, and serves as a smack to the often overly massaged, endlessly reworked studio scripts that end up having to credit half a dozen writers, or more.)

Still, the dull colors and that certain video flatness to the photography only underscore the plight of office worker Sawyer Valentini (an amazing Claire Foy), who goes for a brief consultation with a therapist and ends up accidentally signing a form submitting herself to a "voluntarily" 24-hour commitment at a mental hospital. (Always read what you're signing! Though how many of us really do?) Her horror, once she realizes what has happened, and her inability to get anyone in charge to listen to her, to see that this is all a terrible mistake, is the stuff of bureaucracy-gone-mad, the medicalization of perfectly healthy anxieties and distresses, and the deficits of mental health care system we've seen before: Unsane! It's Brazil meets One Flew Over the Cuckoo's Nest! But the film puts a terrific — in all senses of the word — feminist twist on the familiar tropes of these overlapping genres by framing its story from a woman's perspective, and from this particular woman's perspective. For, you see, the issues that brought her to the therapist in the first place is that she is on the run from a stalker, and she's having trouble coping with the stress of that. His face seems to pop up everywhere; like, suddenly, on the random stranger she brings home for a one-night stand. And, then — as her 24 hours in the psych ward get extended to a week — she suddenly starts seeing his face on one of the nurses (Joshua Leonard).

Is it really him? Everyone in the hospital denies that he's anyone but a carefully vetted psychiatric nurse, and definitely not her stalker. Are they lying, and if so, why would they do that? Is this place making her crazy? It all becomes a horrifying metaphor for how women are not believed, how we are derided as crazy, how we gaslight ourselves into doubting the evidence of our own experience when we are subjected to harassment and abuse by men. The monsters here are all too real, all too banal, and all the more disturbing for it.