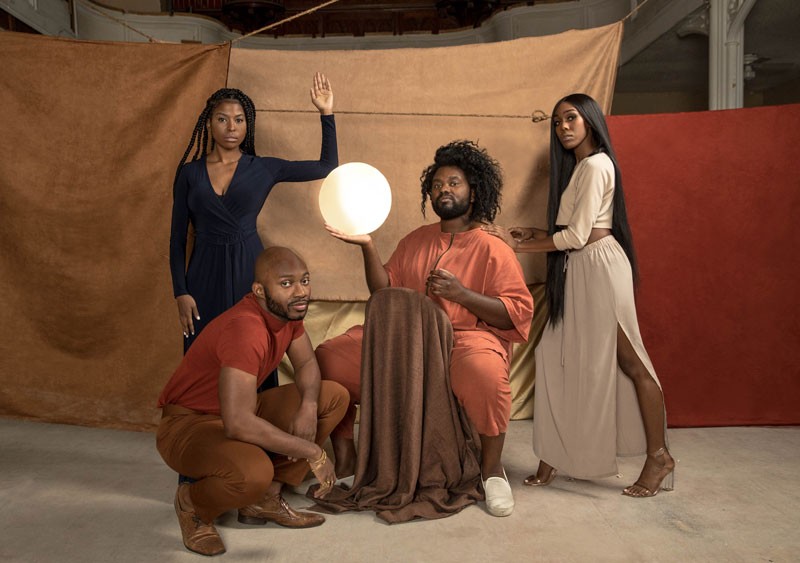 On the cover art for Stranger, the sophomore album from Flint-based performer Tunde Olaniran, the artist is shown emerging from fiery red clouds with a look of enlightenment, despite the ghostly, disembodied white hands that reach at him. The cover's watercolor painting looks like it could be the cover of a fantasy novel, which is fitting, as Olaniran says he is an avid reader of sci-fi and fantasy.

"Science fiction is often about possibilities, and imagining and creating new worlds," he says by phone. "And I think that when we look at science fiction as an entire genre, whether it's books or film or television, the people who write it often articulate different visions of the future. And for so long, and still in a lot of ways, people of color and queer people were just not written into the future — they just didn't exist in the future. And I think that that's really telling in terms of who gets to imagine themselves as surviving the present."

The influence of sci-fi is apparent in a number of ways, like the record's slick, futuristic production. The tracks are a fusion of elements of R&B, hip-hop, and hyper-pop, embodying the message of finding power within, saying goodbye to self-doubt — and fearlessly stunting along the way.

But the influence is also found in more subtle ways, such as a track like "Symbol," which Olaniran, a Nigerian-American, calls a "reverse science fiction" story.

"I imagined my ancestors living their lives, and they were trying to imagine themselves in the future," he says. "Even the idea of having children, being under colonial rule, was a really radical act of envisioning yourself into a future. You know, you don't wish for your future generations to be enslaved, but you're continuing your lineage and you're hoping for a world where they would be free, or where they would be somewhere safer and more beautiful than the place you're in."

That sort of aspirational forward-thinking is reflected in the collaborative nature of the record, which Olaniran says he started working on immediately following his 2015 debut, Transgressor. Taking time to record the album in his own home in Flint as well as working in the studio of Assemble Sound in Detroit, Stranger features a diversity of local artists, including Black Noi$e, Siena Liggins, Little Animal, Jon Zott, Sybling, and more.

"Most successful artists are thin, white, and cisgender," he says. "I think that we need to see more diverse people imagining a future, where they are also creating art and having an influence on art and having a voice that's powerful."

Of course, the record is a Tunde Olaniran record, so that means it's also fun. Keep your stunna shades on while listening to "Celine Dion," a trap cyber fantasy and ode to its namesake. "I'm obsessed with Celine Dion on Instagram," he says. "She's a stunt queen. I just needed to write about that mood and wanted that energy on that song."

Released as a single in July, "I'm Here" is a popping anthem for free spirits. The lyrics "Don't belong, make a road" can be relatable to the path Tunde has created for himself in the industry. In 2016, he left his day job at Planned Parenthood to pursue the life of an artist full-time. He also eschewed advances and offers from indie labels in favor of self-releasing Stranger on his own label, Magic Wheel (also inspired by a book: Banji's Magic Wheel, by Letta Schatz). The move would allow him more control over the masters and publishing, and Olaniran says the imprint goes beyond music and he hopes to make it a vehicle for collaboration in the fields of fashion, choreography, producing events, and more.

Olaniran says the decision to go his own way wasn't easy. "I think when you're in Michigan, especially a place like Michigan, it's not normal for artists to make a living, sustaining themselves in a way that is true to what they want to be doing," Olaniran says. "There's a lot of discouragement, even if it's an internal discouragement."

Some achievements that broadened his creative perspective include being given the opportunity to speak at TEDxDetroit, writing an op-ed about surviving the Flint water crisis for The Washington Post, and contributing the short story "Little Brown Mouse" to Octavia's Brood: Science Fiction Stories From Social Justice Movements, edited by adrienne maree brown and Walidah Imarisha.

"I try to pave the way forward by inviting black people and people of color to do things with me that maybe they haven't done before," he says. "So many times people in Detroit asked me to do something that I didn't even think I could do. They could have gone with someone who was a professional in the field with a proven track record. But sometimes just having the invitation and being given that permission unlocks a lot in you."

"I was like, you know what, let's do all black people — let's be fucking black and amazing," Olaniran says. "So many shows and big events, I feel like they feel weirdly segregated in some way. [Promoters] are trying to figure out how to include black people, but still it's just so many shows where there are no black women on the bill. That just seems ridiculous to me. In the past, I've been like, if I have any control over any show I want to be able to put someone of color on the bill, to show what Detroit has to offer."

But Olaniran also says he wants the show to be a celebration of a city that has been good to him. "I owe everything that I'm doing right now to the energy and love Detroit's given me," he says. "I just really want to be able to celebrate that with Detroit."

Updated: The record release show has been postponed until a later date. Stranger is available to stream or download here.