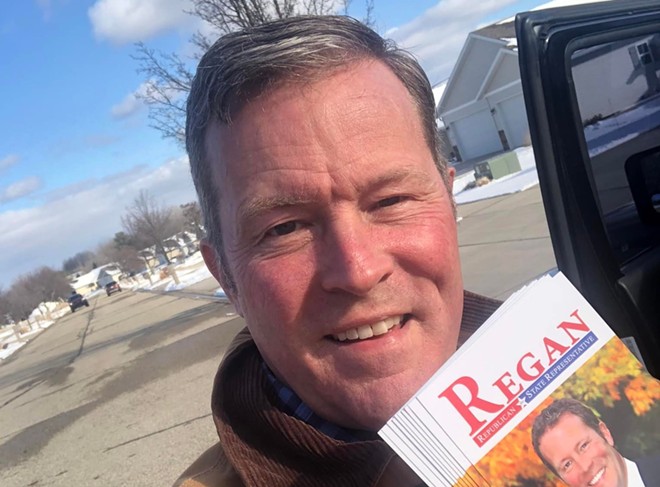 A Trump loyalist and conspiracy theorist who defended Russia’s invasion of Ukraine, said COVID-19 is no worse than the flu, and wants to overturn the 2020 presidential election in Michigan is one step closer to being an elected state representative.

Regan will face Democrat Carol Glanville in the general election on May 3, and he is a heavy favorite to win in the predominantly Republican district.

The seat was vacated by Mark Huizenga, R-Walker, who won a special election to fill a vacant 28th state Senate District seat in November.

In a rambling, conspiracy-ridden, 15-minute interview with Metro Times, Regan made outlandish claims about widespread voter fraud and said he would support decertifying the 2020 presidential election either through a ballot initiative or in the Legislature.

Regan complains that the “Legislature isn’t doing a dang thing about it.”

“I will do everything I can to look at what happened in 2020,” Regan says.

Asked about his position on Russia, two days after the state House passed a resolution condemning the invasion, Regan calls Ukraine “one of the most corrupt countries in the world for money laundering” and said Russia has a right to defend itself from Ukraine’s alleged biological weapons.

“Your job is to protect your country,” Regan says. “Are you going to wait for them to unleash a biological weapon or are you going to take proactive action?”

Russian propagandists and QAnon conspiracy theorists have falsely claimed that Russian airstrikes are targeting secret U.S. bioweapons labs in Ukraine. According to Snopes, Ukraine does not have military biological labs.

“We know that COVID is nothing more than the flu … and we know that vaccinations are experimental,” Regan says. “Now we are expected to believe the mainstream media is telling the truth about Ukraine?”

But, Regan later insists, he doesn’t necessarily support Russia as a leader.

“I’m not saying Putin is a good man,” Regan says. “We know that he is a tyrant with ties to the KGB.”

On his Twitter bio, Regan describes himself as a “Parents Right Conservative, Pro-Life, 2A, Liberty and Freedom Minded Candidate.”

He often invokes biblical scripture, and denies the existence of systemic racism and white privilege.

One of his three daughters, Stephanie Regan, had enough of her father’s extreme views in 2020 and urged voters not to support him when he was running for another state House seat that year.

“if you're in michigan and 18+ pls for the love of god do not vote for my dad for state rep,” his daughter tweeted. “tell everyone.”

The next day, Stephanie Regan implored voters to do more research on his campaign, writing, “I don’t feel safe rn sharing further information regarding his beliefs, but please look him up and just read for yourself.”

Regan responded with a lengthy statement on Facebook, saying, "I am happy that she feels confident enough in our relationship to express her opposing thoughts so publicly.”

In an interview with The Hill, Regan blamed his daughter’s university education.

Regan’s ex-wife, Julie Welch Horning, responded on Facebook, saying, “I am heartbroken for my kids.”

“Silence is permission for ‘Robert Regan’ to continue to lie about his parenting and to continue to gaslight his kids to further his political campaign,” she wrote.

Horning said Regan has been estranged from some of his family and never helped raise Stephanie or her siblings, despite the nuclear family depictions on his campaign website.

Metro Times didn’t ask him about his relationship with his family. After 15 minutes of lies, we had enough.