An anti-Gov. Gretchen Whitmer group on Facebook devolved into a vile platform that promoted violence against Democrats and Muslims and churned out degrading comments about women.

But on Friday afternoon, the group's creator deactivated the page in response to questions from Metro Times.

Tlaib, who is a Muslim American from Detroit, was a common target of the vitriol.

“She needs a bullet between her eyes,” Spencer Hayward wrote.

Carl Wilhelm Sr. posted, “How many teeth you figure you could knock out with one swipe with a baseball bat.”

In an exchange about a photo showing Tlaib posing with the Palestinian flag, group members called for the congresswoman’s death.

Jeannie Percy added, “I wish someone would find this b**** in a dark alley.”

Tommy D’avignon followed up: “Death to this bitch and her voters.”

These are just a few examples of the hostile comments that fill the grammar-challenged page every day.

“We overflood them with imminent death threats, until it stops, one way or another,” Michael Dearing explained to the group.

The creator of the page, Charlie Gillett, admits the “group has spun out of control” and told Metro Times he shut down the page to avoid repercussions at his job as a machine tool electrician in Sterling Heights. (He’s listed publicly as the administrator and creator of the page on Facebook.)

But Gillett had done little, if anything, to stop the threats and posts promoting violence, and blamed the anger on Democrats.

“People promote violence I can't do anything to stop them. I can block them, ban them, report them but don't matter,” Gillett told Metro Times in a statement. “Do I agree with it. Some of it no some of it yes. Do I think it gets to far yes most definitely. But for it to stop id have to shut the group down. Then where would people be able to have their voices be heard. Everyone has opinions and not everyone agrees with everyone's point of view."

Joshua Doan, who was the group’s co-administrator, told Metro Times he was recruited by Gillett to help launch the page and regrets getting involved. He said he wasn't monitoring the page closely because his primary role was to get the page started.

“I do not support or align with those people in the group,” Doan said. “The only reason I am an admin is to clean it up. I may not be doing the best job. But I am doing the best I can with the time I have. The group is not a very big focus point in my life.”

On Thursday evening, Doan alerted the group that he would remove racist and threatening posts, which incensed group members.

“Where can I join a militia?” Stacie Rose Laesch responded.

A member provided an email address.

By Friday morning, Doan said Gillett removed him as an administrator, giving him no control to delete threats as they continued to stream in.

“It’s so awful,” Doan told Metro Times. “These people are so scared and uneducated.”

Created in March 2019, the group was intended to “stand up against” Whitmer, arguing she’s “tanking our economy” and “ruining small business.” But as more people joined and shared deceptive memes and propaganda masquerading as news, the tone of the page became more sinister, conspiratorial, and hateful.

One story from the conservative site Outraged Patriot falsely suggested Slotkin “admits her full allegiance to Qassam Soleimani,” the Iranian general who was killed in a U.S. airstrike.

Member Merek Smith suggested Slotkin “should be burned and raped.”

“Off with her head,” wrote Joe Hackett, whose main Facebook image is a handgun.

“She needs to be hung in the streets for treason,” Mike Repke responded.

Many of the threats are very specific. More than a dozen members, for example, called for violence against Tlaib at an event that she was expected to attend this weekend in Livonia. (She is not attending the event.)

“I hope someone is waiting for her a few hundred yards away with a scope ready to make that pink mist spray from her skull,” Michael Buschert posted on Wednesday.

Dan Hester responded, “we should hang out, i will train you…..”

Robert Heidorf chimed in, “Dame like your thinking and many more in them cross hairs to.” 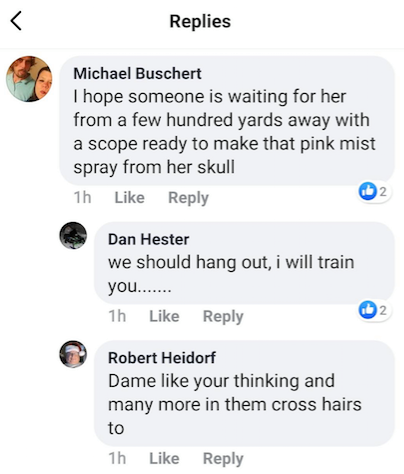 Metro Times shared Buschert’s comment with his employer, Pleasant Moose Lodge in Newberry, which fired him from his maintenance job this week.

“I have relieved Mr. Buschert from his employment, as of this morning,” Debra Singleton, the lodge’s general manager, told Metro Times on Thursday. “Thank you again for bringing this to our attention.”

Members also raised the specter of violence at the Iraqi Consulate in Southfield, where Muslims were gathering this week to mourn Iraqi victims of a recent U.S. bombing of an Iranian general and others.

“This is the type of shit they should shoot up instead of churches lolol. Yeah I said it,” Coterie Chapel wrote.

Nellie Snookie Detwiler responded, “You say what many of us think but bit our tongues lol.”

Danny Stray chimed in, “Burn them and their mosques!”

Fred Thornell went even further: “Fuck it blow them and Detroit up doesn’t bother me none if we loose them both.”

One of the group’s members is state Sen. Peter Lucido, a Republican from Shelby Township who shared at least seven anti-Whitmer posts since Nov. 29. His office did not respond to Metro Times’ request for an interview.

One of the common themes of the group is sexism. Common names used to refer to women in politics are “fat bitch,” “cunt,” “skank,” “twat,” “hag,” “bimbo,” and “whore.”

“A womans place is in the house not the Senate,” Doug Lewis declared. “This is what happens when you put women in positions of authority.”

“People that are gay have a mental sickness and should be treated,” Zach Eddy posted. Brian Schulz added, “Them lgbtqp queers have the highest suicide rate cuz they’re so confused. If we leave them alone they will follow their own demise.”

Members were furious about a news story about Secretary of State Jocelyn Benson considering adding a third gender option on driver’s licenses.

“I really don’t know how much more i can take of this bullshit,” Sarah Loach of Flint wrote. "Bloodpressure rises every day. I am about to go postal.”

Muslims are the most common target of threats and calls for violence. 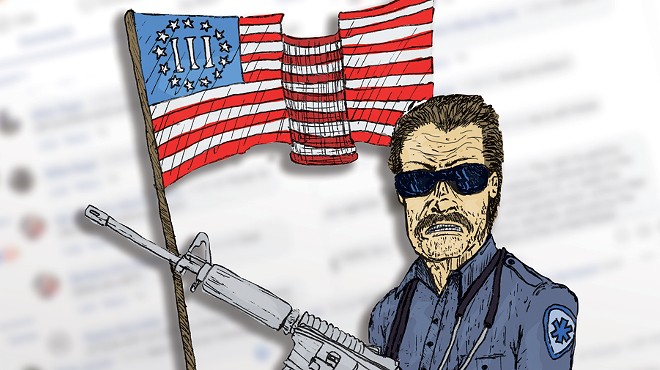 First responders, cops, and detention officers across the nation joined a Facebook group set up by a violent militia leader: Guns up! Tourniquets down?