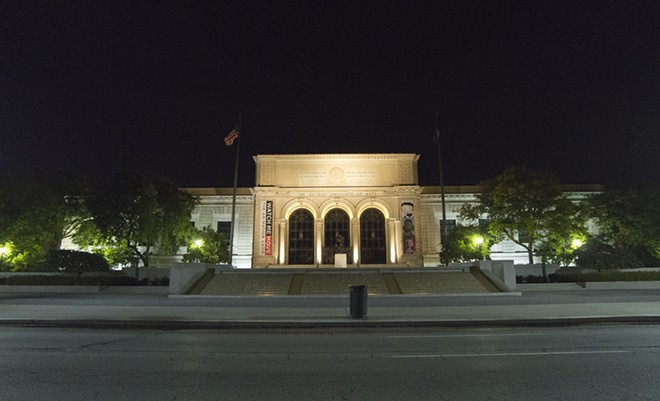 The presidential primary election isn’t the only issue on the March 10 ballot. Voters in Macomb, Oakland, and Wayne counties will also be asked to renew a 10-year millage to fund the Detroit Institute of Arts.

A lot weighs on the outcome of the 0.2-mill property tax.

The millage represents about 65% of the museum’s $38 million operating budget. If it fails, the DIA likely wouldn’t be able to deliver on its promise to provide free admissions to residents of the three counties, and it may drop educational programs and many of its other services.

DIA Director Salvador Salort-Pons emphasized that the millage is a renewal, not a new tax.

"This is not a new millage; this is not an increase in funding," Salort-Pons tells Metro Times. "It's to keep things the way they are. It's just a renewal."

In 2012, the DIA also began bringing murals and high-quality reproductions of classic paintings to the suburbs.

"The murals last more than 100 years and reflect stories or images that are relevant to those communities," Salort-Pons says. "It's a way for us to show the long-lasting impact of the DIA. In the past, we were a museum looking inwards. Now we go beyond the walls of the DIA to serve our communities."

DIA supporters are most worried about Macomb County, where the original millage passed by just 50.5%. If it fails in any county, that county may decide not to levy the millage.

This year’s millage comes two years before the current levy is set to expire because museum officials said they wanted to give voters the choice during a popular presidential primary, as opposed to waiting for an off-year ballot. Democrats tend to be more supportive of the museum, and they will be voting in large numbers during Tuesday's primary election.

Beginning this summer, the DIA is showcasing Detroit's automobile history with a focus on the artistry and technology of car designs. The special exhibit will include 12 coupes and sedans from the past 70 years.

"We want to elevate our history," Salort-Pons tells Metro Times. "We believe car design belongs within the walls of this museum."

In June, the DIA will unveil a special exhibit with 68 pieces by Vincent van Gogh, a Dutch post-impressionist painter. The exhibit will include paintings, drawings, prints, and an illustrated letter by van Gogh.

"This is really an extraordinary museum," Salort-Pons says.