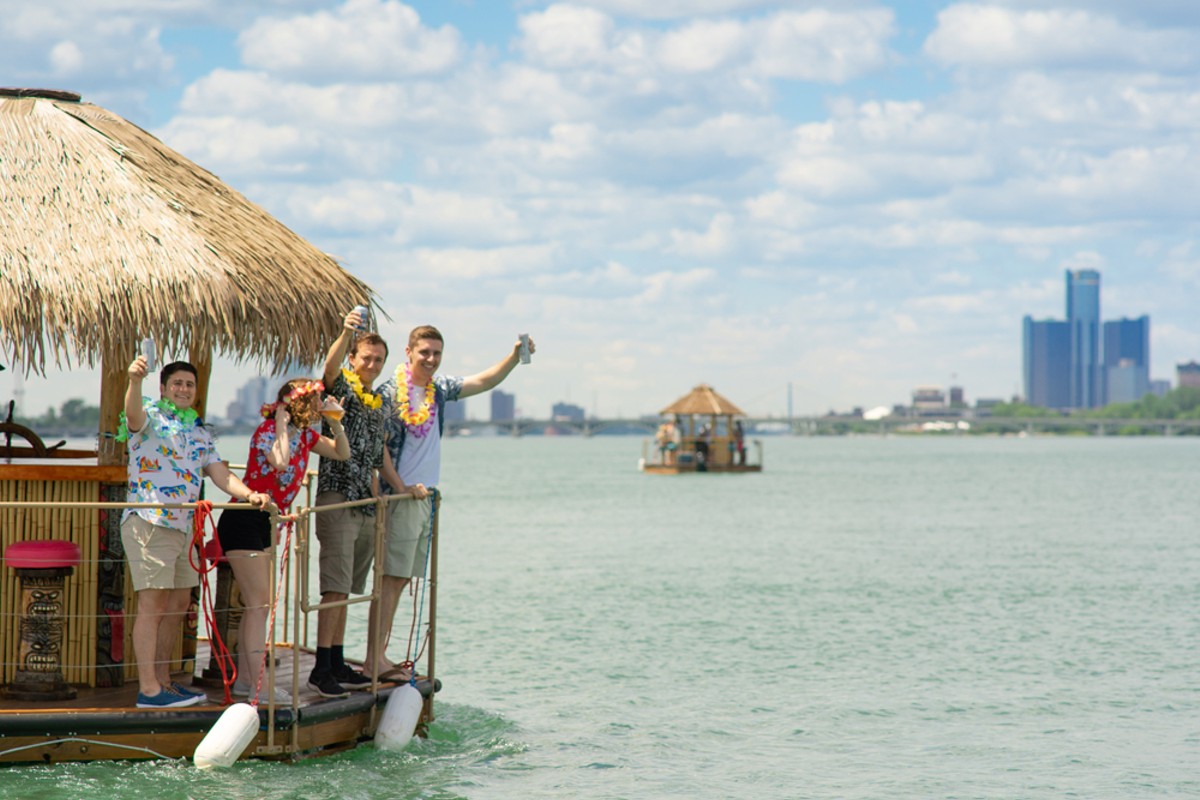 This just in: Detroit has achieved peak kitsch status. We have privately chartered tiki boats now and they're actually really fucking fun. Of course, this is coming from a small staff of screen-addicted journalists who bask in the jaundiced glow of fluorescent lighting like cynical salamanders, and whose shared idea of fun involves debating the cultural significance of Lil Nas X's "Old Town Road" over a midday smoke sesh. Seriously, though. Tiki boats.

Detroit-based Aloha Tiki Tours joins a growing trend of mobile drinking activities made recently available to metro Detroiters. Detroit's Aloha Tiki Tours are the brainchild of Nick Blaszczyk, owner of Pedal Bar Detroit and Detroit Cycle Boats, who was inspired by a visit to Keywest where various tiki boat tours have already taken off.

Each octagon-shaped boat comes equipped with bar stools, a cooler, and a Bluetooth speaker, and guests are encouraged to bring their own food and beverages, save for glass bottles and kegs. Tours take two hours and depart out of two locations: Four boats launch out of Sindbad's Restaurant and Marina, and two more are located at St. Clair Shores' Blossom Heath Park and Pier. While each boat can accommodate up to six people, larger parties are welcome to charter multiple boats for a roving, floating fleet of drunken buffoonery. A single tour will cost you $250 Monday through Thursday and $300 Friday through Sunday.

Where the Aloha Tiki Bar differs from its boozy peddle-powered brother is that nothing is physically asked of you. There's no need to peddle, push, or steer. Simply take a seat, pop a wine cooler (or two, but never three), and take to the high seas at a dizzying 7 miles per hour.

There is one thing to consider when agreeing to embark on a tiki adventure with Aloha Tiki Bars: You damn well better like the company of people you are with, otherwise two hours can stretch into eternity and eternity should not be spent on a floating tiki bar, Jimmy Buffett be damned (unlike with the land-based peddle pubs where, if needed, you could jump off and escape Kathy, the close-talker from HR, or Chad, your sister's energy drink-sponsored boyfriend who still thinks dubstep is lit). No, with the tiki tour it's just you and up to five additional seafaring guests on the Detroit River.

For our voyage — which we just so happened to embark on during arguably the most ideal day in a mild summer so far — we would rely on the services and guidance of Jerry Hollis — firefighter, paramedic, and now an esteemed tiki boat captain.

Captain Jerry prefers slightly overcast, rainy days on the water, enjoys most music (though he cites something a recent tour group introduced him to that he calls "grunge rap" as being the sonic equivalent of intercourse), and without words appeared to disapprove of our vaping. Sorry, Captain. It's maritime law, baby. (And it's legal now, Jerry. Chill.)

"In case of an emergency, well, just listen to me and we'll get through it," Hollis said moments before the engine sputtered and a slate-colored panic momentarily washed over his face.

"This is unrelated, but how do you connect the Bluetooth?" Metro Times editor in chief Lee DeVito asked, looking at his phone. It was our plan to exclusively listen to a yacht rock playlist for the duration of the tour for no reason other than to cosplay as retired people.

The engine appeared to sputter again. This time, Captain Jerry snapped into problem-solving action and lifted a door in the floor to reveal the gas tank. As it turns out, whoever had last filled the tank screwed the lid on too tight. Not since the Hawaii episode of The Brady Bunch has such tiki-themed drama unfolded.

We would not die today.

Instead, Captain Jerry pointed out the backyard views of the Manoogian Mansion, which Mayor Mike Duggan may or may not currently live in, and its neighbor, one of Kid Rock's many homes — this one boasting a large garden statue that may or may not be made in the Bullgod's likeness and/or a Rock 'n' Roll Jesus. Along the way, we passed a returning tiki tour; one of Detroit's water treatment towers, an ancient structure that rises out of the Detroit River and apparently pumps water from an underground aquifer to service metro Detroit; Belle Isle beach; the charred remains of the Boblo Island boat; and a maritime gas station, where during the trip's halfway point, passengers are able to take a brief bathroom break and stock up on snacks and water if needed. (Pro tip: Drink all the water because a two-hour boat ride is not enough time to sober yourself from two, not three, wine coolers.)

By the time we returned to land, we had a decent buzz, a new perspective of life along the Detroit River, and a renewed appreciation of our horrible coworkers thanks to bonding over wine coolers. Totally worth it.