Boston and Dennis DeYoung to play DTE in July 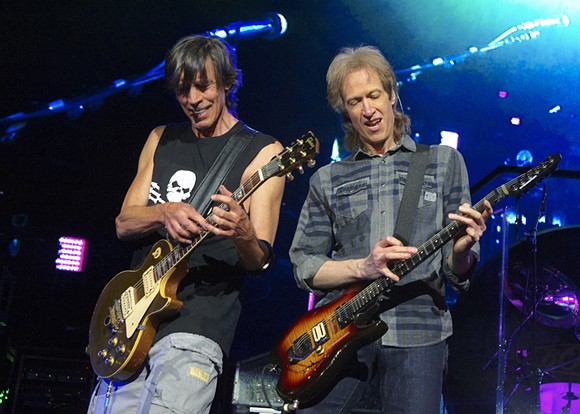 Photo by Bob Summers
Tom Scholz (left) and Gary Pihl (right).
The classic rock band who used the studio as an instrument in and of itself, Boston, brings its 40th Anniversary tour with Dennis DeYoung: The Music of STYX to DTE Energy Music Theatre at 7:30 p.m. on Saturday, July 30.

This is going to be fun! Bring your dad!

Of course, as we all know, Journey and AC/DC are not the only classic rock bands of the 1970s era who've had to replace their lead singer. Boston's lead vocalist Brad Delp, whose high-pitched wail was distinctive to say the least, tragically committed suicide nine years ago. Replacing him cannot have been an easy task, but they really seem to have found a suitable replacement with new vocalist Tommy DeCarlo, who has been performing with the band since 2008.

Tickets go on sale this Friday, April 1 at 10 a.m. at Livenation.com, Palacenet.com, The Palace ticket store and of course across all Ticketmaster locations.