The unstoppable Jill Jack returns with her 12th LP 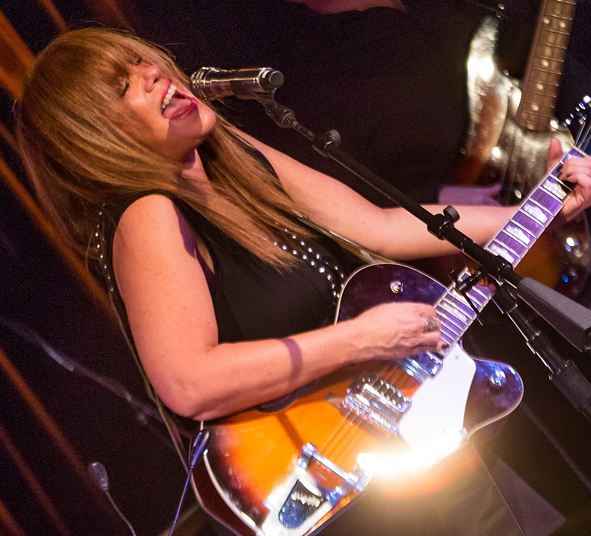 Even given her extraordinary talent, remarkable longevity, and famous (in Detroit) celebrity, homegrown roots-rock chanteuse Jill Jack has been waiting a quarter of a century for that one really big break.

This cannot possibly be what she had in mind.

"Careful what you put out in the universe," Jack smiles faintly, showing us on a visit to her warmly-appointed Ferndale home why she cannot extend her hand in welcome.

The ring finger of her right hand — her guitar-strumming hand — is encased in a white cushion of sponges, gauze, and tape.

"Broke it in half," the singer-songwriter explains. "Just tripped over the sidewalk. That's all it was. Then two weeks later I'm at a wedding and I'm talking with my hands. A waiter came by, hit it with a tray and tore some ligaments."

The result has left Jack out of commission for eight weeks. "We figured out how to make our six-piece band a five-piece, and I just sing," she says. "But it's weird because I'm so used to always having my guitar with me. It's a part of you, like an appendage. It's my friend. Even if you have a really bad gig, you've got your buddy with you."

Jack — her real name, retained from her first marriage to former Forbes Brothers drummer Dave Jack — hasn't had many off nights in an impressive career spanning more than 20 years, 11 recordings, and approximately a bazillion live performances. On one hand, her mishap couldn't have come at a more inconvenient time, as she prepared to unveil her almost-inconceivable 12th record, These Days, with a release party Saturday night at the Brighton Center for the Performing Arts.

On the other hand, Jill Jack's broken finger might have been exactly what she needed.

"I've had kind of a tough year," she concedes, almost matter-of-factly. When a devastated digit may be the least of her setbacks, Jack is being as subtle and understated as her lyrics.

Early in 2017, a close friend was murdered in Haiti. Jack tore a rotator cuff. She contracted a bacterial infection, possibly from frequent visits to the hospital to visit her ailing father. Then, in April, her father — retired Huntington Woods osteopath Dr. Barry Ray Szczesny, her most reluctant fan-turned-proudest supporter — died.

"He was larger than life," Jack sighs. "He was the greatest guy, the one who made you laugh at parties, always told the best jokes."

Jack was working under him as a nurse's aide and had planned on going to nursing school before deciding to quit and pursue music. "I know he was disappointed when I told him I was going to do music for a living," she says. "He told me I was crazy, quitting my day job with a 3-year-old daughter while I was getting a divorce. But one night at dinner he said, 'You're doing the right thing. You're following your passion, and you're believing in it.'"

Szczesny's death prompted Jack to cancel concert dates — a rarity for her. "I think I've canceled maybe two shows in 25 years, and we had to cancel six," she says. "I've sung with strep throat, a fever of 104, toothache, you name it. It's awful because people don't understand. They kind of forget that you have a life."

Jack's emotional shock and mourning also coincided with the recording of These Days, named for her cover of the legendary Jackson Browne ballad. It was her first record for her new label, Michigan-based independent Smokin' Sleddog Records. "So I really didn't have a lot of material," the artist says. "I kept telling the band, 'C'mon, guys, write with me.' I'm the most laid-back person in the world. I couldn't understand why anybody would be intimidated writing with me."

Finally she persuaded her guitarist, Brian Chester White, to collaborate on some tracks, and co-wrote what she calls "the song with the most groove on the album, 'Crazy Is As Crazy Does,'" with Detroit-based jazz bassist John Barron. She met Barron while recording Pure Imagination, her dream side project with longtime drummer Ron Pangborn, a collection of classic vocal standards dedicated to her father and completed six months before his death. That record captured the latest of her astonishing 41 Detroit Music Awards, her first in the jazz category.

"If you're clever and you're driven, you can make a living playing music in Detroit," says Pangborn, the former Was (Not Was) drummer who has provided Jack's backbeat for nearly all of her career. "Maybe Jill hasn't connected on a national level, but she's managed to put together a great little cottage industry with potential to move further."

Still, Jack admits contemplating retirement. She had a new marriage to Roger Andree, her dad's death rocked her, and on top of the rotator cuff injury, "I can't climb up on stage as easily as I once could," she admits.

Then life gave her the finger.

"Apparently the universe was like, 'Oh, she didn't get it yet,' and literally threw me on the ground," Jack says, laughing. "You know, this saved my career."

"I was so tired and I didn't know what I wanted," she reflects. "I was just lost when my dad died. This broken finger made me miss my guitar. It shook me up. The thought of it maybe going away made me realize how important my music is to me. I never want to take it for granted."