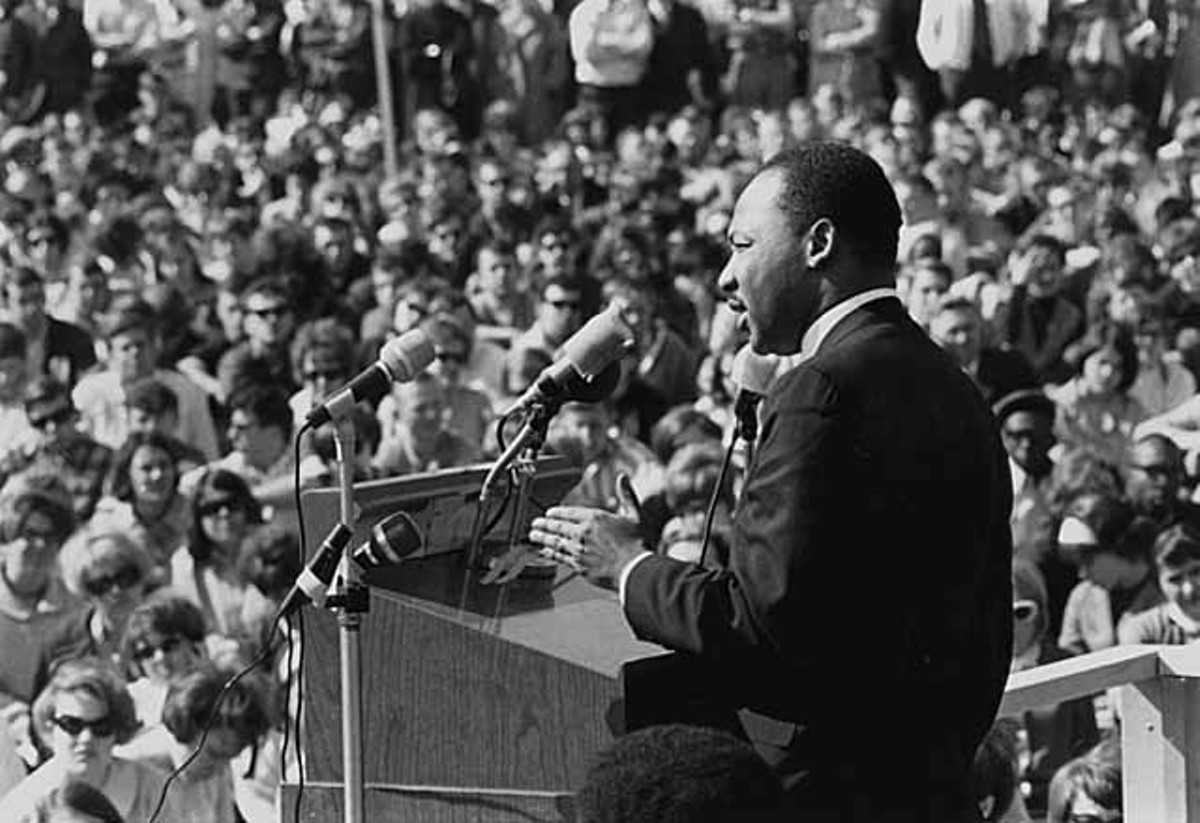 King speaking to an anti-Vietnam war rally at the University of Minnesota in St. Paul, April 27, 1967. Minnesota Historical Society

"We've basically solved the case, telling people how it happened and why it happened," says Dr. William Pepper.

The case is the murder of progressive activist Martin Luther King Jr., and Pepper is talking about the contents of his 2016 book, The Plot to Kill King (Skyhorse Publishing). He'll be discussing the subject Wednesday, April 4 at the Charles H. Wright Museum of African American History as part of observances marking the 50th anniversary of MLK Jr.'s death. Local attorney Carl R. Edwards will moderate the discussion.

A lawyer and writer, Pepper started working with King in the year before his death. Once convinced of the accused man's innocence, he served as a lawyer for James Earl Ray, the reputed shooter of King. In the late 1990s he argued the civil wrongful death suit King Family vs. Loyd Jowers and other unknown co-conspirators.

Loyd Jowers, owner of a restaurant near the motel where King was assassinated, testified that a group he called the Dixie Mafia, along with the U.S. government, conspired to kill King. Jowers testified in a deposition that he hired Memphis police Lieutenant Earl Clark to shoot King. The jury decision was in favor of the King family. All of this and more is painstakingly detailed in The Plot to Kill King.

"It was very hard to solve," says Pepper. "It required a lot of patience and perseverance. People, when they get close to deathbeds, want to say things truthfully that they have never said before — and we were in that situation."

There is a lot more to the story. Pepper says that Andrew Young was also a target that day. And probably most incendiary is the reporting that shows King did not die from a gunshot wound to his face. Pepper creates a death scene in the hospital emergency room straight out of some kind of gothic horror nightmare.

"Martin Luther King was not killed the way the world thinks he was killed," Pepper says. "He wasn't killed by the shot."

As medical personnel worked on King in the emergency room, Dr. Breen Bland, the head of neurosurgery at St. Joseph Hospital in Memphis, entered with two suited men. He is reported to have said, "Stop working on that nigger and let him die. Now get out of here, get out of here all of you."

Pepper says a surgical nurse told him the men then spit on King. Then Bland put a pillow over King's face and smothered him. He was killed in the hospital and the murder was covered up. Ray was an unwitting scapegoat who was set up. Regarding his guilty plea? Pepper says Ray was told he would be killed if he didn't plead guilty.

That all became public in 2016, although it was not widely reported on in the press. But now, 50 years later, what lessons do we take from this? All of the culprits are dead or well beyond the reach of the law. At least the truth is out. Furthermore, especially in the political and social climate we are currently in, it give progressives a look at what we're really up against.

"Because of the involvement of government we can learn that, at the end of the day, actions that government takes when they can't control the actions of an individual who is a threat to the established order, they use assassination as a last resort," Pepper says. "We have to be aware of that. Leaders of anti-government causes have to be keenly aware of that. They need to establish for themselves what is the red line that if they cross it they will be subjecting themselves and their family to serious harm."

To dig into this subject matter is to take the lid off a lot of things. The official legend of the nonviolent King who was a civil rights movement leader at the time, led the March on Washington, and had a "dream" conveniently limits his scope. Over time, King's activism led him to become a stone cold progressive. When assassinated, King had turned against the war in Vietnam, supported labor activism, and had begun work on the Poor People's Campaign.

Helping to get the Civil Rights Act passed in 1964 and the Voting Rights Act passed in 1965 was not enough. King recognized that the pain was being spread far and wide. His activism moving forward wasn't just for black people; it was going to be for everybody. He was about building coalitions between oppressed peoples. And that's where he crossed the line. Fighting for the civil rights of black people was dangerous enough. Fighting for the civil rights of all people and threatening to build a winning coalition? Well, that was just too much. So he was killed.

"If we're not unified we will not have the revolution that is required to completely restore social justice and human values," Pepper says.

King was about building coalitions between oppressed peoples. And that's where he crossed the line.

At this moment the disunity in the United States is at a crisis point. Donald Trump exploited it to reach the presidency by spewing hatred against immigrants, Mexicans, Muslims, women, black people, NATO, China, North Korea, and more. He courted violence at home and abroad.

It's clear that Pepper is correct when he says that those in power are willing to kill oppressed people that they can't control. It's happening all over the world right now.

Healing and unity: A faith-based commemoration of Kings' life and legacy will be presented on April 3 at the Greater Grace Temple. Actor Barry Scott, musician Mike Ellison, producer Sanchez Harley, local clergy, and a 250-voice choir will present a selection of prayers, music, and spoken word that captures the spirit of the movement then and now, along with excerpts of King's speeches.

Mass incarceration and immigrants: Wayne Law's chapter of the National Lawyers Guild will focus on another aspect of that struggle on April 3 at the Wayne State University Law School. "Exposing the Intersection of Immigrant Detention and Mass Incarceration" will be discussed by panelists Ruby Robinson of the Michigan Immigrant Rights Center, Nadine Yousif of CODE Legal Aid, Maria Ibarra-Frayre of Washtenaw Interfaith Coalition for Immigrant Rights, and Rachel Lerman, a student volunteer at the CARA Family Detention Pro Bono Project. Professor Sabrina Balgamwalla, director of the Asylum and Immigration Clinic, will moderate the panel.

"The United States has 5 percent of the world population and we hold 25 percent of the inmates," says Lerman, who organized the panel. "This costs a huge amount of money, and the effect on communities is devastating."

Mass incarceration seems to be part of the strategy to control unwanted peoples. If you can't just kill them, then lock them up. The United States maintains the largest immigration detention infrastructure in the world, detaining approximately 380,000 to 442,000 persons per year.