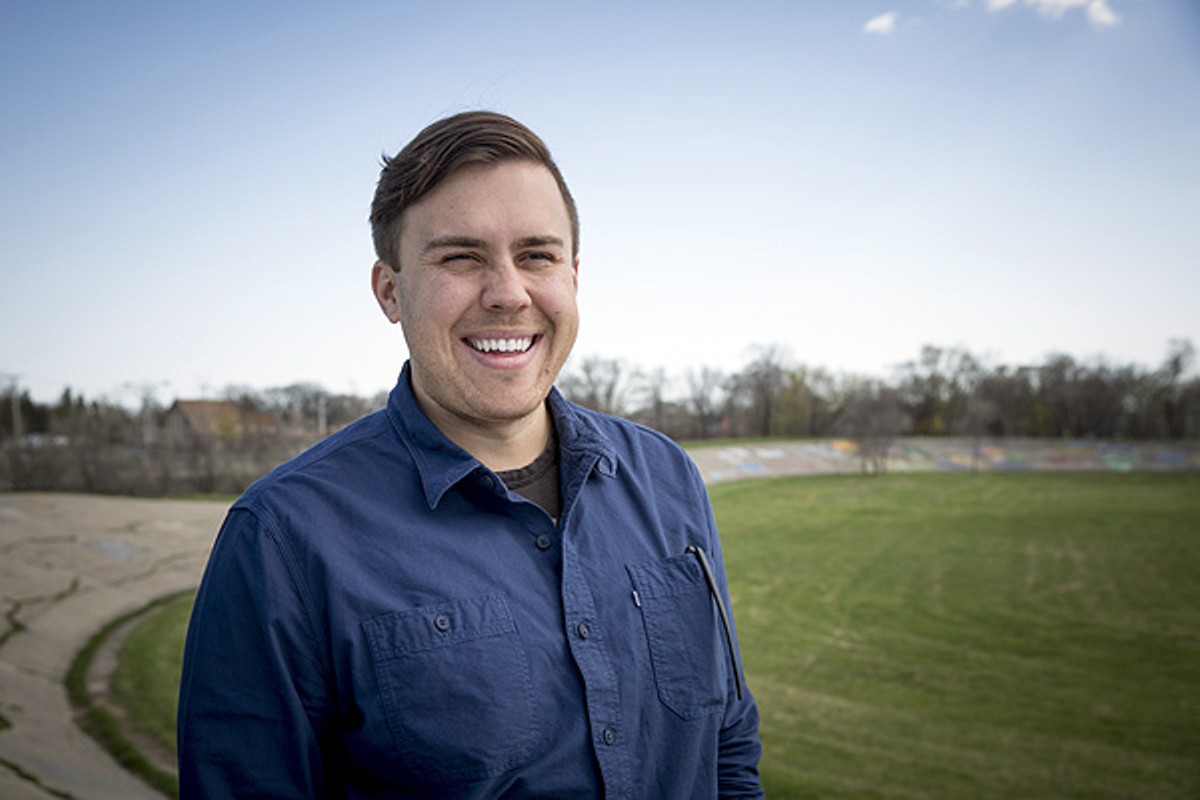 It’s no secret that Detroit’s public transportation system is abysmal. From his office’s vantage point off the Conant Street route, Andy Didorosi says he sees a city bus every hour — on good days. The system has other problems too. “Sometimes you literally cannot get somewhere on the bus system — it just does not go there,” he says. “Other times it’s so slow and painful that it might as well not even go.” Name a U.S. city and chances are they have a better public transit system than Detroit. It shouldn’t be this way: We’re the Motor City.

Didorosi knows this better than most — he’s basically a transportation guru. He started the Detroit Bus Co. in 2012 after he found some Ferndale Public School buses for sale. He sanded them down, got street artists to paint them in bright colors, and started a private venture with modest aims of transporting the bar-going crowd between the suburbs and downtown Detroit. Then things kept rolling.

Now, the 28-year-old has been tapped for two commissions under Detroit Mayor Mike Duggan. More recently, he was sought by the Regional Transit Authority to help develop a master plan for southeast Michigan. And the Detroit Bus Co. — now a low-profit, limited liability company — has expanded to include more historical tours and latchkey transportation for some Detroit schools.

Didorosi sees his new position as an opportunity to give back to the city he was born in (he grew up on the east side before moving to Harper Woods; he now resides in Boston-Edison). “Transit is one of those insurmountable, massive issues, and it’s the one thing where I might actually know something about — or I’m learning, rather,” he says. “I think I bring an outsider perspective. They don’t want to talk to the same ‘transit experts’ over and over and over again because you get the same answers.”

In addition to all of the above, Didorosi is a tinkerer. “I don’t know how many transit companies are playing with virtual reality, like Oculus Rift, but it might present some kind of experience that we can use a little part of in our daily work,” he says. For the city, Didorosi says the Detroit Bus Co. has been developing a software platform that will calculate efficiency in the system. He also says he hopes to help bring back the Thunderdrome — a race for all kinds of motorized contraptions held at Dorais Velodrome in Detroit.

But Didorosi says his biggest dream is to help set up a system when he can leave his house by public transit and arrive at work in 20 minutes — to be able to help create a true urban way of living in the Motor City.

“We can’t stand another generation of folks who don’t have any skill set or any trajectory upward,” he says. “Detroit can’t take another round of that, so this is an investment that we need to make.”

Leyland "Lee" DeVito grew up in the suburbs of Detroit, where he read Metro Times religiously due to teenaged-induced boredom. He became a contributing writer for Metro Times in 2009, and Editor in Chief in 2016. In addition to writing, he also supplies occasional illustrations. His writing has been published...
More
Scroll to read more The People Issue articles
Join the Metro Times Press Club