The Rolls-Royce of drums was made here in Detroit 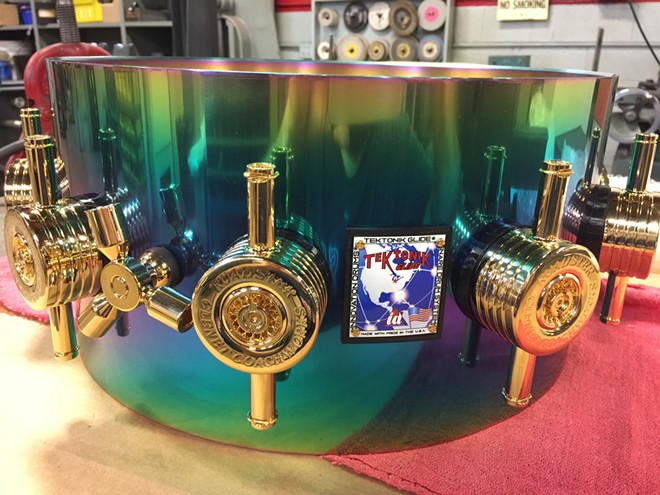 According to people who study such things, the drum has been around since 6000 B.C. and can be traced to ancient Turkey and China. In its modern form, the instrument has undergone countless refinements and improvements.

So for some dude in Bloomfield Hills to claim he just produced the greatest snare drum ever made suggests that he could have a few lug nuts loose. Yet Stephen Badalament, founder and CEO of Innovation Drum Co., doesn’t miss a beat when he declares, “The Innovation Tektonik Glide Snare Drum System produces a quality of sound that is unparalleled, consistent, and repeatable, employing the most up-to-date engineering and technology available. Our aim is to produce the Stradivarius of drums.”

Can’t beat that. Since 1998, after Badalament and his crew completely restored Charlie Watts’ beloved drum kit in 11 days prior to the Rolling Stones “Bridges to Babylon” tour, his Innovation company, virtually unknown outside percussion circles, has been crafting custom-made instruments for many of the world’s most discriminating drummers.

In fact, now it can be told: Badalament was in the process of completing a state-of-the-art, one-of-a-kind complete drum kit for Watts prior to his death last Aug. 24.

Yet Badalament believes his new snare drum (or snare drum “system,” if you please) may be his crowning achievement. Fourteen inches in diameter, seven inches deep. A shell made out of titanium, buffed to a mirror gloss then covered in a PVD green-blue-indigo coating. Every shell contact a precise, 3-D printed vibration gasket. Personalized snare drum heads. Every fitting — screws, washers, cup washers — 24 karat gold plated.

And nearly five-and-a-half years in the making.

“I am well versed in the history of drum making,” says Badalament, “and this is really an amalgamation of all the great attributes of all the great drums that have come before it. But they didn’t have the technology to make the function and the structure better. “Manufacturing, prototyping, cutting metal… we had seven prototypes before we nailed it. The patent process alone took two years, but I got three patents out of it.”

This is not an instrument you’ll be likely to find in the drum section of Guitar Center. But it is a testament to the all-consuming passion of Badalament, an in-demand drummer in his own right who has performed with the likes of Patti Austin, Keith Washington, and the Contours. He says he has been mesmerized by drums ever since he saw Ringo Starr playing atop that pedestal with the Beatles on the Ed Sullivan Show in 1964.

And as true to his region as he is to his craft, Badalament insists his drum-atic improvements could not have been made anywhere else but southeast Michigan.

“I really don’t think we could make this outside of metro Detroit,” he maintains. “I’ve been to New York. I lived there. They don’t have the manufacturing infrastructure to make good shit like this. We do. My CNC (Computer Numerical Control) shop is in Riverview, my main assembly shop in Wayne, we even used cutting-edge technology from Roush Automotive. It’s a ‘Made in Michigan’ product in every way.”

Rather than beat his own drum (sorry), Badalament invited a trio of native Detroit drummers, two of whom use Innovation products, to test his futuristic instrument prior to shipment and give their candid opinions. The picky percussionists:

LaDell Abrams, one of America’s most celebrated gospel drummers, who has performed and recorded with the likes of John P. Kee, Vickie Winans, the late Andraé Crouch, and, most recently, Usher.

Paul “Jamo” Jamieson, legendary drum tech (the person responsible for all percussion instruments on a concert tour) now retired after nearly 50 years, best known for his work with Toto and its late drummer Jeff Porcaro but associated with Mick Fleetwood, Phil Collins and countless others. And…

Johnny “Bee” Badanjek, the esteemed Motor City percussionist whose backbeat powered the Rockets and Mitch Ryder and the Detroit Wheels, among others, and whose first-ever solo LP Arc of the Sweeping Sky was recently released by Royal Oak’s Funky D Records.

Each man rhapsodized about the Tektonik Glide as if describing a new love.

“First off, this drum is like no other,” Abrams enthuses. “It supersedes everything when it comes to the sound, the sensitivity, the rimshot, the clarity, it’s just phenomenal. It would absolutely change how I play because you don’t have to work as hard to get what you’re looking for. I told Steve, it’s snare drums to the next level. It’s flawless, man.”

Notes Jamieson, who tuned a drum nearly every day for a half-century, “The engineering of this drum has every feature to take it to the next level. The big drum companies are in business to make money, so they’re not going to invest in the best materials, the best plating, the best workmanship. This drum has taken every innovation developed in the last 50, 75 years.”

Leave it to “Bee” to provide the lighthearted summation. “This comes a long way from the Sears and Roebuck snare drum people used to order from a catalog,” he says. “No matter what you compare it to — Ludwig, Pearl, Yamaha, whatever — this is like the Rolls-Royce of drums. Charlie Watts bought a snare. Ringo (Starr) is a Ludwig drummer and he ordered a whole kit.”

Badalament flew the drum — embellished with a metal medallion of the buyer’s face in 3D on the shell — in person to his client’s home in San Francisco. The client, a wealthy businessman and amateur drummer, threw a lavish party to welcome its arrival.

“Some of the top music professionals in San Francisco and Oakland were there,” he marvels. “He had the drum on a pedestal, covered by a golden blanket for the big reveal.”

Badalament’s next move is to convince him to order an entire drum kit, which could run into the low six figures. Meanwhile, “We’re going to go to market with it,” he says. “I already have two more orders. We’re making them now.”