The mothers of consternation 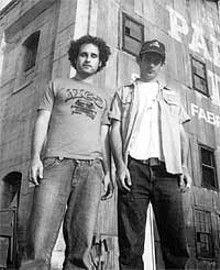 God’s Chosen People have their homeland and rock ’n’ rollers have one too. Ilan Starkman and David Rapaport met 11 years ago while attending high school in Tel Aviv, Israel. The two discovered a common interest in rock music and began playing in Hebrew-language bands influenced by American and British groups such as Led Zeppelin, the Doors and the Beatles. Years passed and members came and went, but the Starkman/Rapaport core remained. They continued writing songs together as a two-piece, the former moving behind the kit and the latter remaining on guitar, and began writing lyrics in English.

Rapaport, aka Stitch, experimented with a home-spun tuning method that allowed him to sound at times like three or four guitarists playing at once — some songs even come complete with head-scratching bass lines (how’s he doing that?) and heavy-distortion crunch that could easily be confused studio magic (it’s not). Starkman pounded away with a frenetic, self-taught enthusiasm reminiscent of Nirvana-era Dave Grohl. The result was a garage-punk dish that makes up for trite second-language-poetry lyrics and lethargic, grunge-affected vocal melodies with unique song structures and the let’s-take-on-the-world enthusiasm of a high school band eager to climb out of the basement. The two-piece called themselves the Motherfuckers and set out to conquer the Israeli scene.

“People in Israel call us heavy metal,” says Starkman, aka Jimi Nostalgia, of his band, now called the Mother’s Anger, a name that has personal resonance for the members but that they also felt would be more palatable to English-speaking crowds. “The scene there [Israel] is weird. There isn’t really much of a crowd. The country is smaller than New Jersey, and only a small percentage of people are interested in the music.” The lack of opportunities to play shows and a peer-pool of bands that Starkman describes as “soft and diluted” prompted him and Rapaport to bring the show west. They sold all their earthly possessions (minus, of course, their hearty supply of vintage gear) and headed off to New York, where they purchased a brown 1973 Chevy van that now acts as their home as they crisscross the States. The van, it’s worth noting, has a built-in sink.

During their first U.S. tour, a demo recorded back in Tel Aviv made its way into the hands of Dionysus Records honcho Lee Joseph, who was immediately taken with the band’s sound and story. After signing them, he brought them to Los Angeles to record, where he introduced the Mother’s Anger to Detroit native Michael Davis.

“He was sent from heaven,” Starkman says of the former MC5 bassist, who also adds low end and vocals to a track on their self-titled debut, which is in stores now. “We didn’t even know the MC5 before that. We had him play his music for us. We saw the movie [MC5: A True Testimonial]. We were completely shocked. We watched it twice in a row — we couldn’t believe all they’d been through. He told us a lot about the Detroit scene back in the day — we didn’t know that much about the Stooges either. He introduced us to [MC5 drummer] Dennis Thompson. After we cut the album, when we went on the road, people started saying we sounded a little like the MC5 and the Stooges. It’s amazing how much he influenced us.”

While the group has a kindred connection with Detroit — in addition to having worked with Davis they cite the Demolition Doll Rods as one of their favorite bands, the White Stripes as a major reason they believed the two-piece format could find success and say they’d love to move to Detroit if only it were warmer here — their Israeli pedigree remains at the heart of their identity. But despite coming from a place that is politically charged, to say the least, the Mother’s Anger isn’t interested in pushing any agendas. “Of course the political climate we were around growing up is in the music, but we’re not a political band,” Starkman says. “Music has no boundaries. It’s really heartwarming: You can be from wherever and connect with people wherever."