The Kellogg strike is over, you can buy Corn Flakes again 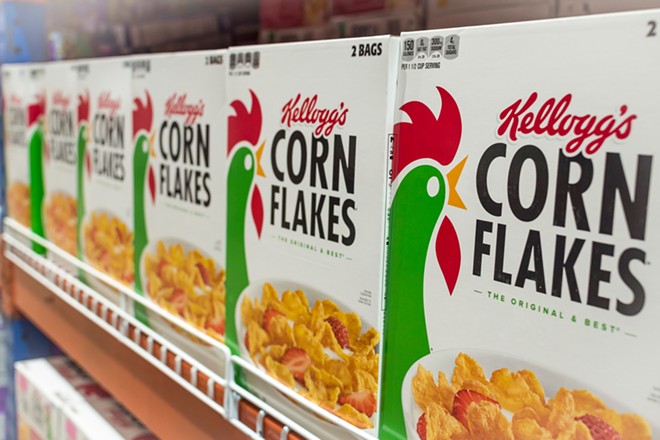 MDV Edwards / Shutterstock.com
Kellog's Corn Flakes on display at an aisle in a supermarket.

To those who have been showing solidarity to striking workers at Kellogg by boycotting Corn Flakes and other breakfast cereals, rejoice.

Union workers at Battle Creek-based Kellogg have finally ratified a new contract, ending a strike that has lasted for more than two months.

"Our striking members at Kellogg’s ready-to-eat cereal production facilities courageously stood their ground and sacrificed so much in order to achieve a fair contract," said Bakery, Confectionery, Tobacco Workers and Grain Millers International Union president Anthony Shelton in a statement. "This agreement makes gains and does not include any concessions."

About 1,400 Kellogg workers across the U.S. have been on strike since early October over grueling hours and a two-tier wage system, in which newer workers make less than older ones.

According to the union, the new five-year agreement includes no concessions and a clear path to regular full-time employment. It also includes a moratorium on plant shutdowns through October 2026.

The labor dispute escalated in recent weeks, as Kellogg began hiring scab workers. U.S. Senator Bernie Sanders held a rally for the workers in Battle Creek on Friday, where he read a letter of support from President Joe Biden.

The strike started in "Striketober," amid a flurry of high-profile work stoppages and labor organizing across the country. Earlier this month, workers at a Starbucks in New York voted to form a union, a company first.

Officials like U.S. Rep. Andy Levin of Michigan say it's time for a new era of the labor movement, and have urged Congress to strengthen labor rights by passing the Protecting the Right to Organize (PRO) Act.