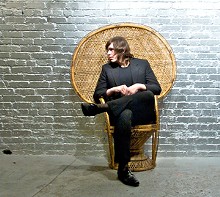 When Virginia Woolf said a woman needs "money and a room of one's own," she was talking the ability to create art, in this case writing fiction, in a "man's world." If only she could've heard James Brown's lament. As the world plasticized, Andy Warhol took his money to build a room (The Factory) in which art-minded men and women — and ambiguous, albeit marvelous, meshes of the two — flourished, powered by glam-infused fission to create an earth-bound art-orgy. A third room can be found in Detroit's Eastern Market. It's called UFO Factory. Inside there's all forms of fantastic.

With upcoming shows such as Punk Tim, which celebrates the work of the one and (unarguably) only Timmy Vulgar to an acid-art show set around the Fourth of July, UFO continues to not only support Detroit arts, but embody them. Look no further than Noise Camp at the CAID where you can take in the live incarnation of UFO Factory, Princess Dragonmom, in which Fischer plays an electric watermelon, and at which you might have the opportunity to murder a unicorn.

METRO TIMES: Are UFOs and conspiracy theory something of a muse?

DION FISCHER: As a concept, a UFO's a metaphor for almost anything. The actual, physical UFO that spacemen fly around in is one thing, but it's another thing to see that it works as a metaphor for anything that you might not understand but are searching to understand. As an artist, you want to figure out what the UFO is.

MT: You can't have a workspace that also functions as a gallery, music studio and performance space with the word "factory" in its title without drawing comparisons to Andy Warhol and The Factory/Silver Factory.

FISCHER: My mom knows who Andy Warhol is and she doesn't know anything about art. He's beyond divisive in that it's all pervasive. He became what he loved; what bigger dream is there for an artist than to become what you love? Andy Warhol's the hero — he's amazing.

MT: Warhol's scene meshed music and visual art to the point that it was hard to say where one began and the other ended. What you're doing here is very much akin to this.

MT: In Detroit, it seems one artistic outlet is rarely ever enough for most artists.

FISCHER: I almost don't understand people that don't do both visual and musical art. I think that it's all the same thing just with different tools. The first visual art I ever did in my adult life was making covers for my records.

MT: What are some recent projects?

FISCHER: I haven't been doing that much painting recently, but for no particular reason. I've been keeping busy with these two different bands: F'ke Blood and Infinity People. With F'ke Blood, we're just now finishing up some recording here and Infinity People is a project I've also been working really hard on. There are 13 people in the band.

MT: How would you describe the sound of Infinity People?

MT: What kind of musical kick are you on these days?

FISCHER: He started the first successful vegetarian restaurant in California and expanded it into a cult and a band. That's a thing that I'm concerned about lately with artists — moving into making it so that we can make our lives sustainable in a certain way so that we can continue to do art and music without the concern of whether or not we're going to make a million dollars. We need to grow our own food and fix our communities.

MT: Are you tied in with the Detroit Evolution Lab here in Eastern Market?

MT: What else is in the UFO mix?

FISCHER: Well, we just got back from Berlin with our Princess Dragonmom project, which is harsh, electronic noise with performance art. We did a piece called "Unicorn Man" where we brought out a unicorn and let the German kids decide whether or not to kill the unicorn.

FISCHER: They always murder the unicorn. If we bring a guy in a bush suit or robot suit or unicorn suit out, the result is always the same — the kids attack. It's something innate.

MT: There was a piece in a newspaper recently that focused on how artists from all over are moving to Detroit. Do you think the art community will embrace these refugees?

FISCHER: I can't speak for Detroit, but I know that I will welcome anything that's good and done for the right reasons. If it's just OK, I might not welcome it. There are tons of artists in Detroit I like, but I think we're all here to work with people we love. Looking into the future I know we're going to make the effort to become an official nonprofit organization. And to take it to the next level, it might even be a church.

FISCHER: Not exactly, though there are ideals about spirituality that I think a lot of us have in common. More like a place where you can get out whatever it is that people get out in church without making it specific to any one thing. I am an ordained minister now and we officially do weddings, funerals and baptisms here. We actually have two ordained ministers: The Rev. Dave Buick (of Italy Records) — who married me and my wife
— and myself.

MT: Do you envision communal living for art-minded individuals in Detroit?

FISCHER: If I had the means? Absolutely! Right now I have the means to buy my friends a drink once in a while. There's a lot of talk about the re-ruralization of Detroit. We need to focus on sustenance.

MT: I heard there's a neighborhood with lambs ...

FISCHER: I live in Southwest and there's everything. I grew up on a farm, so for me, I'm hoping to combine the life of a farm boy with a rock 'n' roll artist. When I go for a walk in my neighborhood and the rooster crows, I think that's just amazing.

MT: How do you perceive the state of Detroit's creative class now in juxtaposition to where we were during those famed Gold Dollar days?

FISCHER: Right now is just like those days — everything's blooming. It hasn't happened as much with the art community as much as it has with the music community, with the well-documented huge success of one artist that causes other artists to compromise and go about doing things the wrong way. Jack [White] did the rock 'n' roll community a favor by moving away because people aren't pandering at his feet for help and they're doing their own thing with no immediate chance of becoming famous.

MT: Is there something abuzz in Detroit's creative class that you're really excited about?

FISCHER: Our little brothers in Gardens took the whole New Detroit Sound thing and ran with it. They actually created a social networking site for Detroiters called newdetroitstyle.com and they're really pushing it hard. I think it's the seed of a movement. You should check it out.

Sketches in Grit is a new, recurring column that quizzes young artists from Detroit's fringes.