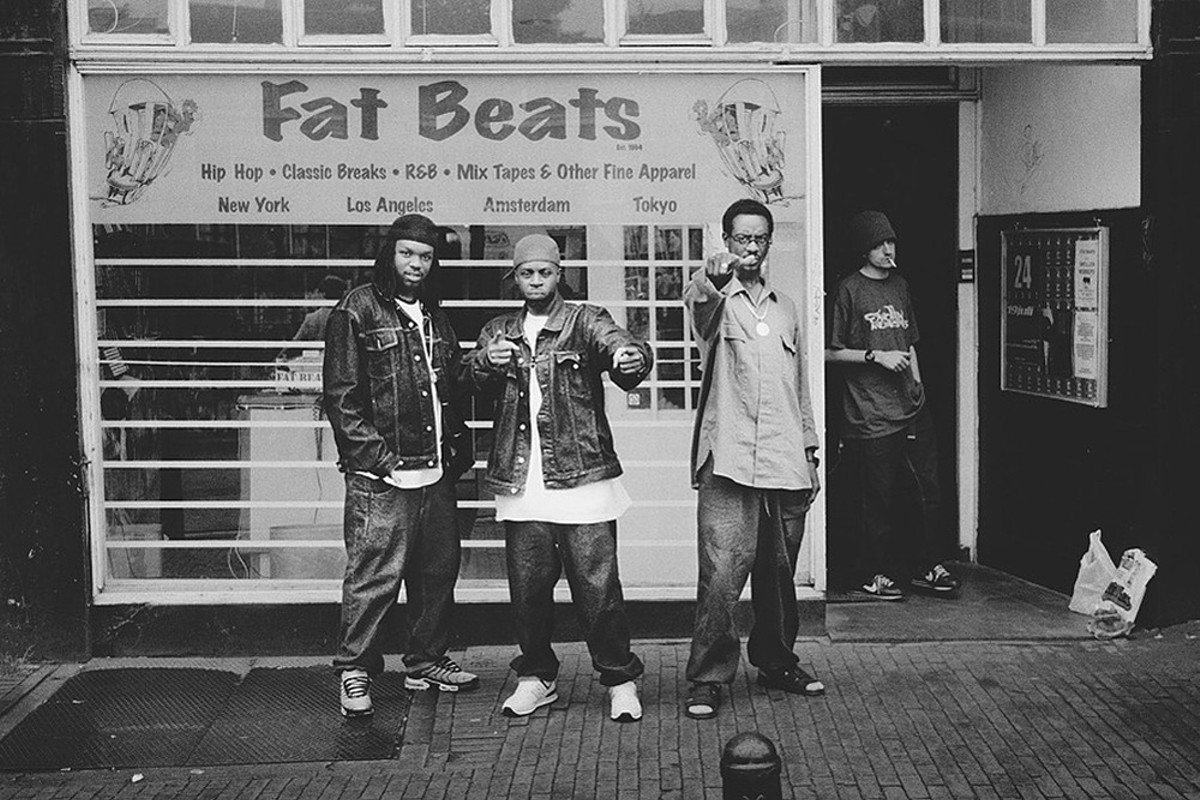 In the early '90s, hip-hop wasn't the mainstream cultural behemoth it is today. Back then, hip-hop was still largely a non-commercial art form found in Black and brown communities in cities across the United States. Founded in 1994 by Joe Abajian (aka DJ Jab) in New York City, Fat Beats was a record store that brought these communities together — and quickly became a nerve center for all things hip-hop. Originally located on Manhattan's lower east side, Fat Beats has played an enormous role in celebrating hip-hop culture in its purest form for the last 25 years.

Throughout the '90s and 2000s, Fat Beats was where you went to cop the latest must-have 12-inch single, chat with fellow hip-hop heads, and catch legendary in-store performances from artists such as Black Star, Organized Konfusion, Outkast, and Common. As the business got going, it didn't take long for Fat Beats to establish itself as a distribution company and, eventually, a record label. At its height, Fat Beats also had storefronts in Los Angeles, Atlanta, Amsterdam, and Tokyo.

As an epicenter for underground hip-hop, Fat Beats is correctly linked to New York City and Los Angeles. But Fat Beats is also tied to another hip-hop city: Detroit.

One of the first records from Detroit to make it on the shelves at Fat Beats was "Just Don't Give a Fuck," an early Eminem single from 1997. That, as it turns out, was only the beginning. Fat Beats has played a central role in bringing Detroit hip-hop to the world, from the legendary producer J Dilla, his group Slum Village (and the many collaborations he was involved with), to producer-MC Black Milk, upstart rap group Clear Soul Forces, funk band Will Sessions, and more.

In the mid-'90s, Amir Abdullah (DJ Amir) was working in sales for Fat Beats. "We did this exclusive mixtape with DJ Babu and J Rocc," he says. "It was only being released in Japan. The mixtape had 'I Don't Know' by Slum Village on there. I had never even heard of Slum Village, but we were all like, 'What the fuck is this? This is crazy!' It just blew my mind."

As a sales rep, Abdullah developed relationships with record store buyers across the country. In Detroit, he regularly spoke with DJ-producer Waajeed (an original member of Slum Village), Eric Ramos of Kaboodlz Record Store, and DJ House Shoes. "They put me on to so much stuff," says Abdullah. "Shoes called me one day and he's like, 'I got this record that Dilla produced by this dude named Phat Kat. I'm pressing them myself. You want them?' He sent me the record, and it was crazy. It sold out super quick. We also did two Frank-n-Dank records. That was really my introduction to hip-hop coming out of Detroit."

Through Abdullah, Fat Beats built a strong relationship with J Dilla that lasted through his move from Detroit to Los Angeles and when he signed with indie heavyweight Stones Throw Records, which is also linked to Fat Beats. Some of the records released over that time included Slum Village's Fantastic Vol. 2, Welcome 2 Detroit, Champion Sound, and Donuts. Tragically, Dilla died from Lupus in 2006 the same week Donuts was released. Dilla's passing, a catastrophic event in and of itself, came amid one of the darkest periods in Detroit hip-hop.

"That was a weird time," remembers Ironside Hex, a linchpin of Detroit music. As an A&R manager, Hex has worked alongside Danny Brown, Guilty Simpson, Elzhi, Slum Village, Apollo Brown, and many others. "Blade from the Street Lord'z passed in 2005, then of course the great J Dilla, and the heart of the city, Proof, died within months of each other in 2006. Music didn't seem that important anymore, but some of the best Detroit hip-hop came after that."

Earlier in the decade, around 2004, Hex was hired to be Slum Village's road manager. At the time, Black Milk, who is now a staple in Detroit hip-hop, was "a roadie on that tour," recalls Hex. "When Fat Beats showed interest in Black after hearing his Sound of the City project, he conferred with T3 from Slum Village and tapped me to quarterback the deal." This was the beginning of Hex's role as Black Milk's manager and the start of their relationship with Fat Beats.

Around that time, Bill Sharp was running Fat Beats' retail website. "The way it worked was that everyone who was working there was encouraged to seek out projects and artists they were interested in. Everyone there was predictably a passionate hip-hop head," says Sharp. "Black Milk was one of the first artists I got behind and boosted up. He was an incredible artist. That was a big part of getting more of a Detroit connection for Fat Beats, not that there wasn't one before."

As an artist signed to Fat Beats' record label, Black Milk dropped Popular Demand (2007), Tronic (2008), and Album of the Year (2010). "I was already familiar with Fat Beats as a label and distribution company," Black Milk says. "That was at a time when the underground independent rap scene was thriving more than ever. It's hard to compare now because of digital music versus the actual, physical records being sold back then. Bill Sharp reached out, and getting a deal done was pretty easy. Fat Beats really helped establish me as an indie artist and grow my audience."

As Hex and other hip-hop scholars have posited, 2008 was one of the great years for Detroit hip-hop. Along with Black Milk's Tronic, Guilty Simpson, one of the city's finest lyricists, dropped his album Ode to the Ghetto on Stones Throw. The album that completes this argument is Elzhi's The Preface.

"I was working closely with Hex, who I first met when we signed Black Milk," says Sharp. "Hex was the one who connected us with Elzhi. The Preface was a really good under-the-radar project that we put out a little hastily. Given the nature of the business at that time, we were able to get something done that's held up pretty well. There's a lot of dudes from Detroit that are completely out of this world talented, and Elzhi is one of them."

In the mid-2000s, the introduction of digital music rocked the music industry. Record stores closed around the country, and there was real uncertainty about the future of the business. By 2010, Fat Beats' shop in New York, the first of their record stores and the last one standing, shut down. This was lamented as the end of an era, and in many ways, it was. Fat Beats, however, didn't go out of business. To cut back on costs, they moved their headquarters to Los Angeles and embraced selling records online. A new era was taking shape.

More than 10 years removed from the initial digital music scare, the industry has started to figure out how to monetize itself through streaming platforms and downloads. Physical record sales, although they'll never be what they were, are on the rise once again. In 2018, after almost a decade of relying solely on e-commerce, Fat Beats opened a new storefront in Los Angeles. This summer, Fat Beats celebrated its 25th anniversary with parties in New York City and Los Angeles.

"It was incredible," says DJ House Shoes, who hosted the L.A. celebration. Originally from Detroit, House Shoes now lives in L.A., where he runs the record label Street Corner Music and works with Fat Beats. "I've hosted shit before, but it's usually in smaller rooms," he says. "There was probably 800 people in that joint. I was a little sketched out. It was an honor to be able to set people up and give some history on the situation. It was an incredible night. Just to be in the room was enough, but to be there tying it all together was amazing."

Looking back, there aren't many in the record business who made it through the drastic changes wrought by digital music. But after 25 years, Fat Beats remains. "I like to think Fat Beats is still around because they're still the gatekeeper of quality in hip-hop," says Amir Abdullah. And just as other cities have been a part of building that legacy, Detroit has been there every step of the way.