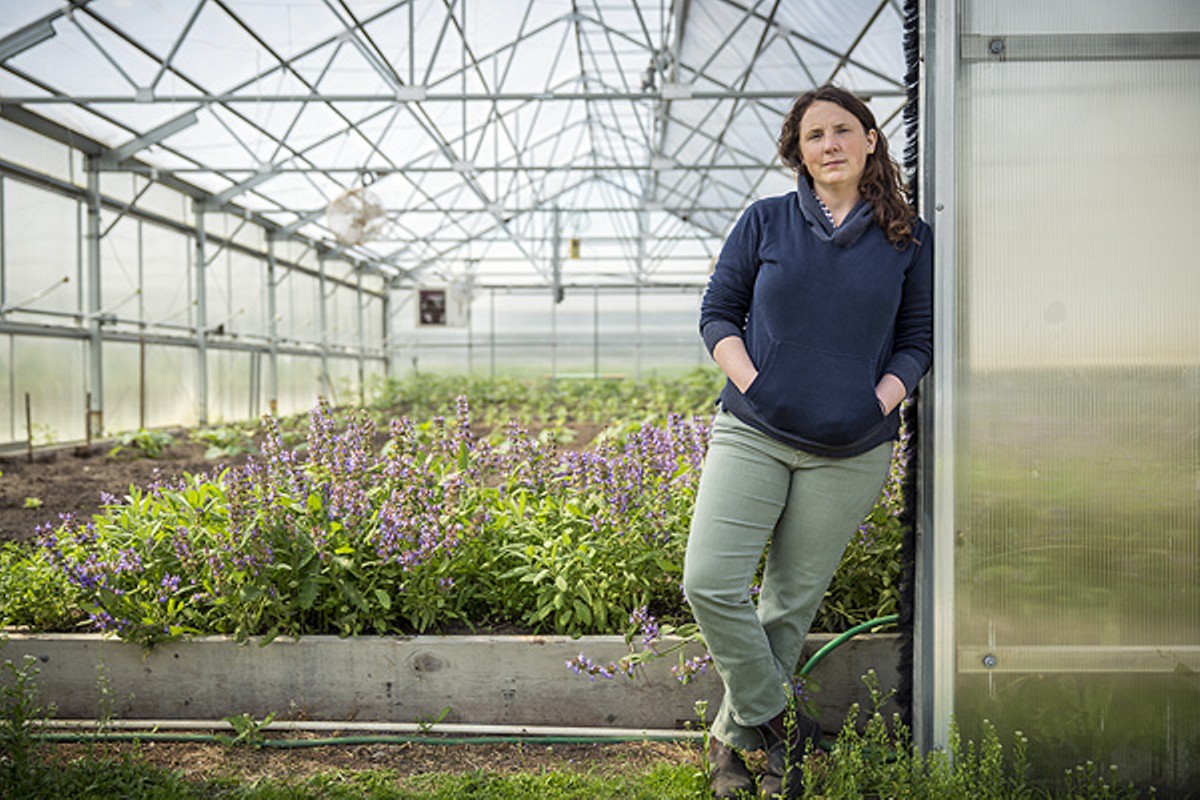 It's a breezy day in downtown Detroit, where Ashley Atkinson, 36, is making the rounds at Keep Growing Detroit's downtown farm, which consists of greenhouses and gardens. She wears a sweater and blue jeans, seated on some great carved stones that buttress the metal that holds in berms of earth.

A Hubbard Farms resident, she's originally from Flint, where, once upon a time, much of her family held blue-collar jobs working for the auto industry. "If people are curious about me or why I do what I do I just say, 'Remember that movie Roger & Me? OK, imagine you're 5 years old and you look up at the adults and that's what they're doing,'" she says. "That's why I am who I am."

In her early 20s, Atkinson became involved with the struggles of inner-city people to control their own destiny, and pioneered a program whereby city residents were paid to board up homes and mow lots in their own neighborhood, instead of giving the job to outside contractors who cared little about the work they did. This is the kind of script-flipping work she pursues — finding ways to take top-down systems and give powerless people control.

That's what drew her to Detroit, which not only faces similar problems on a larger geographic scale, but where groups like the Detroit Agricultural Network were a little better developed than in Genessee County. "The folks in Detroit at that time with the Detroit Agriculture network were very, very inspirational to me," she says. "There was a little older, little bit more robust community of urban gardeners and farmers here that I would visit quite often for advice and ideas and inspiration."

She chose to do a lot of her field work for her master's degree in Detroit, and moved here permanently, since, as she says, "You don't do this work in a community where you don't live."

That career path has culminated in her position as co-director at Keep Growing Detroit.

The farm provides much of the stock that's sold at Keep Growing Detroit's stall at Eastern Market. But, with a bit of training, other city residents are also able to participate in the program, which helps everybody from home gardeners to upstart urban farmers gain access to selling at the market.

"It's a really powerful program. You can then sell with us and receive 100 percent of the profits of whatever you grow," Atkinson says. "So if you bring 10 units of carrots to market, and they bring $30, then you get $30 at the end of the week. We're incubating businesses. A lot of the Detroit-based farm businesses that are successful and known, like Rising Pheasant Farms or Brother Nature, all came out of the Detroit system.

"We by no means can take responsibility for the success of those people and those businesses, but we were part of their story, which we're really proud of. "

Latest in The People Issue