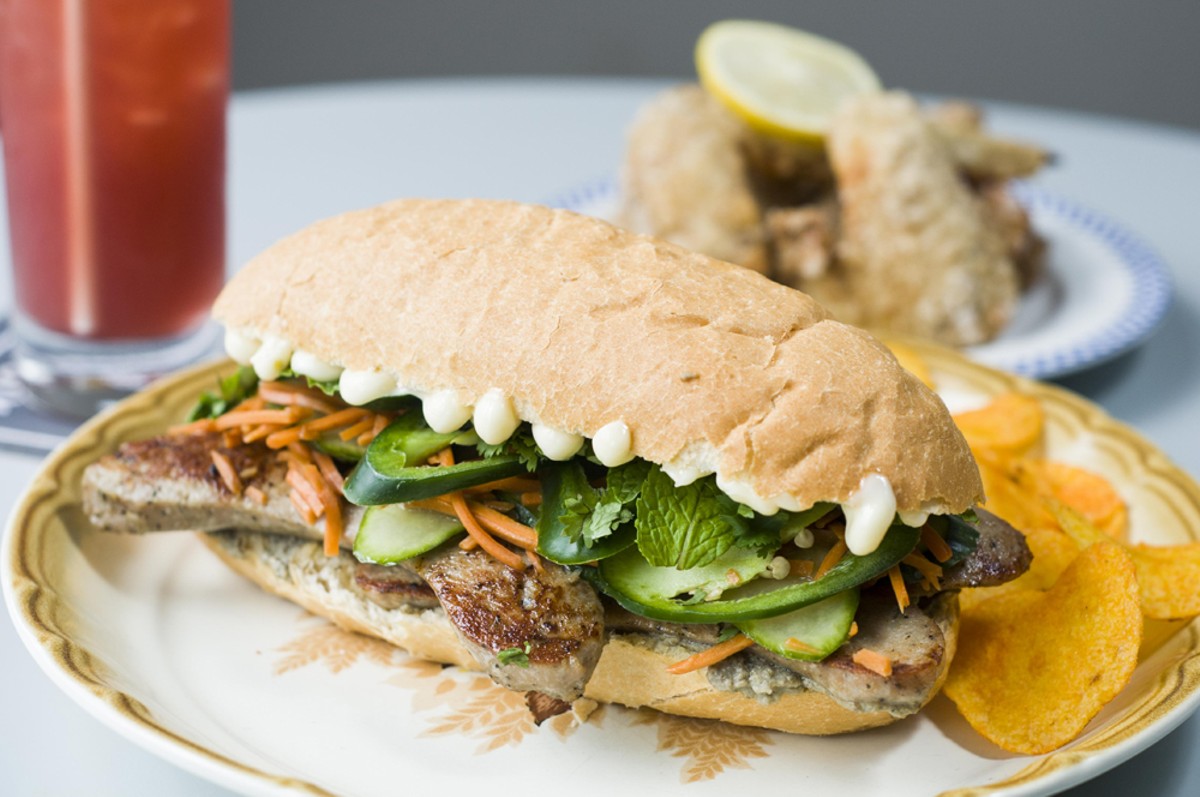 Eating at the Charlevoix was a happy surprise: It feels like a down-to-earth neighborhood place — when I went on a Monday, just the bar stools were occupied, seemingly by guys hanging out after work, no suits — but the food is better. When I spoke to bartender and co-owner Nick Arrigo afterward, he said that's exactly the vibe he and his two partners were going for: "a neighborhood bar, but kind of elevated."

Nearly a year old, the Charlevoix is in the least hoity-toity part of Grosse Pointe Park, the least hoity-toity of the Pointes. Its Monday-Friday happy hour, 4-6 p.m., offers a $5 buttermilk fried chicken sandwich, old-fashioneds, margaritas, and Moscow mules for the same price. A recent Monday night special was Bell's Oberon for $3.

That's not to say the place is a steal overall. A $4 taco may be worth it, but it isn't a deal. Still, the quality of the food, helmed by chef Brandon Belknap, recommends the Charlevoix. He is a veteran of Roast, the Lark, the Sardine Room in Plymouth... and the Detroit Lions. When I was at the Sardine Room several years ago, I was pleased by its slightly off-the-beaten-path ingredients like sweetbreads, rabbit, and foie gras. I called its scallops with pork belly and hollandaise "a miracle of taste sensations." The Charlevoix is a more downscale joint but still delicious enough to warrant many return visits by east-siders.

The menu is snacks, wings, tacos, and po'boys — and Belknap has his po'boy rolls flown in from New Orleans, claiming you just can't get exactly the right kind around here. They are large, noticeably crisp, and hospitable for their varied fillings: shrimp, perch, roast beef, tofu, or Vietnamese chicken sausage. The sausage is the fanciest, with cucumber, shredded carrot, mint, cilantro, jalapeño, mushroom paté, and smoked mayo. It's intermittently fiery, and pretty much a bánh mì — New Orleans is home to many Vietnamese immigrants. The shrimp po'boy is also good, heated up by red zhug sauce ( which is Yemeni in origin), and even the fried tofu has a good texture and absorbs the other flavors well.

My favorite dish at the Charlevoix may have been the simple salt-and-vinegar wings. This was a new preparation for me, with a slightly scary-looking white crust and a tart bite. The wings are of course meaty, with a great skin texture. Thai wings were also terrific, with a smoked mayo sauce and whole cilantro. I don't know why I overlooked the habanero-honey-garlic wings, either.

A Spam fried rice dish took my Puerto Rican companion back to her childhood, though its origins actually lie in the Charlevoix's "neighborhood appreciation night" on Tuesdays. From 9 to midnight Belknap serves a different, shorter menu with everything priced below $10. Corned beef fried rice was invented for that, and the Spam version is a more summery variation.

I liked a crunchy cod taco, but my companions said their carnitas and brisket tacos tasted good but similar to each other. A tray of mini smoked salmon salad sandwiches on crisp seeded Everything Kaiser rolls was fine, but the best (and healthiest) snack I tried was the cool and sweet collards-coconut salad — surely this is the first time that combo has appeared in the annals of chefery — with almonds, basil, lots of peas and a ginger-soy vinaigrette.

Arrigo is a happy bartender, who of course makes his own mixers and syrups. The Charlevoix uses cardboard straws, not plastic — highly appreciated. I liked the tall and strong Indian Summer, a complicated drink with two bitter, one burning, one tart, and two sweet tastes: tequila, St. Germain, Aperol, lemon, grapefruit, and simple syrup. Lovely to look at and to drink was the pale violet Break the Bank, where vanilla — vanilla-infused Pisco, to be precise — is a main flavor.

If you're familiar with every ingredient on Arrigo's list, you're a better person than I: things like Orinoco bitters, pistachio orgeat, and Velvet Falernum. His Root Down cocktail uses cucumbers, beets, and carrots. But there's still a Bud or a Corona for the faint-hearted or the impecunious.

The Charlevoix has a fabulous-looking Sunday brunch menu 11 a.m. to 3 p.m.: ham-and-egg po'boy with redeye gravy; a super-spicy version of chicken and waffles, with Nashville hot chicken, a cheddar waffle, and jalapeño maple syrup; and chilaquiles with carnitas. I love it that they sell micheladas, bottles of cava, and mimosas with $1 refills. Eastside friends, please invite me.

« Grandma Bob’s is among Detroit’s most expensive pizzas. Is it worth it?   |   Papelon Arepa Bar gets Southwest Detroit acquainted with a Venezuelan staple »