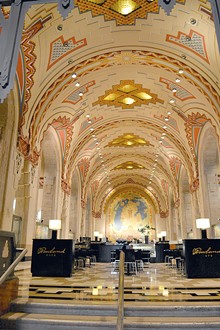 Imagine it: The roaring '20s in the city of Detroit. Hundreds of identical Model T's lining Detroit's streets. The city experiencing a construction boom. The Purple Gang ruling the underworld. Detroit is flourishing thunderously.

This was the scene when plans were laid to construct what is now known as the Guardian Building for a bank called the Union Trust Company.

At 85 years old, this building has stood for the entirety of most Detroiters' lives. Though construction was started in 1927, it wasn't completed until 1929. An entire city block was cleared to make way for this 40-story mammoth. It's faced with 1.8 million bricks whose color was specially formulated for the building. When it was completed, it was the world's tallest brick building.

The building's architect, Wirt C. Rowland, picked the brick specifically because it was cheaper than other materials. He was also conscious of its color and the way it would be seen by folks who were now driving by in cars, rather than horse and buggy. The effect of the so-called "Guardian brick" colored stones, mixed with a rainbow of colorful tiles, is eye-catching to say the least.

Pewabic Pottery can be seen on the lower portion of the building's exterior facade, but from the brick up, the tiles are from the Atlantic Terra Cotta Company, says Michael Boettcher, a local tour guide who leads informative trips through the lobby of the building every Saturday at 11 a.m.

Two figures are carved into the exterior facade of the building above the Griswold Street entrance, and inside two similar figures can be seen on the decorative metal gates that serve as an entryway to the upper level of the ground floor. The figures on the outside hold keys, while those on the interior are clutching swords. The figures' talismans represent safety and security, subliminally communicating to guests that their money is well-protected.

Between the two exterior figures is the tiled design of a person with outstretched arms who serves to welcome people into the building. Boettcher says what most people don't notice is that the person has wings. Those wings represent aviation, which was experiencing a boom during the time of the building's construction.

Those figures, along with a host of interior design features, are part of what makes this Detroit gem so special. The main lobby is 150 feet long, and the ceiling vaults as high as three stories, adorned with certain types of marble that are no longer available to mine today. Multicolored and backlit, the effect is as colorful as a lit Christmas tree — and just as joyous. Tribal designs and color palettes are employed to beautiful effect. An enormous mural of the state of Michigan can be seen on the back wall of the upper level of the main lobby. It soars from floor to ceiling and is offset by the intricately designed ceiling, which contrasts vastly to the colorfully tiled nature of lower level's ceiling.

It's been called Detroit's Cathedral of Finance, and with one look inside it's no wonder why.

Inside each of the two elevator lobbies are stained-glass windows that depict eerie, angelic figures, and from the walls hang sconces that aren't original to the building, but which were fashioned in the Art Deco style the Guardian is known for. The doors of the elevators are even etched and painted.

While anyone can enter the Guardian, walk-ins are permitted only on the main floor of the building. There's a coffee shop, a Pure Detroit outlet, and a Pewabic Pottery store, along with a branch of Bank of America, plus a large seating area and a shoe shiner.

These days, the building is meticulously maintained and just as imposing as the day its doors opened. Because it's been continuously occupied since its construction, the Guardian hasn't fallen into disrepair like other downtown structures that have gone unoccupied for long stretches.

The Guardian has changed hands a number of times in its 85 years. Shortly after it opened, the bank was hit hard by the Great Depression, and during World War II it was used as an Army command center. Following the war, the bank filed for bankruptcy and the building was sold to the Guardian Building Company of the Michigan Bank Corporation in 1952. MichCon bought the building in 1975 and then sold it to the General Electric Pension Trust on a leaseback contract.

In 1998, the same firm for which Rowland designed the Guardian, SmithGroup, bought the building and invested millions of dollars in renovations. It was then that the building was opened to the public for the first time in over 25 years.

Wayne County bought the building in 2007 and relocated its staff there, and almost all of the building's office space is occupied, with only a few vacancies.

"It's had its ups and downs over the years," Boettcher says, "but I think it's on its way back up."

« Back in burlesque: After a few years' hiatus, the striptease revue takes over the stage at Cliff Bell's   |   A peek inside Hamtramck's Conant-Caniff Market, aka 'The Rock 'n' Roll Liquor Store' »