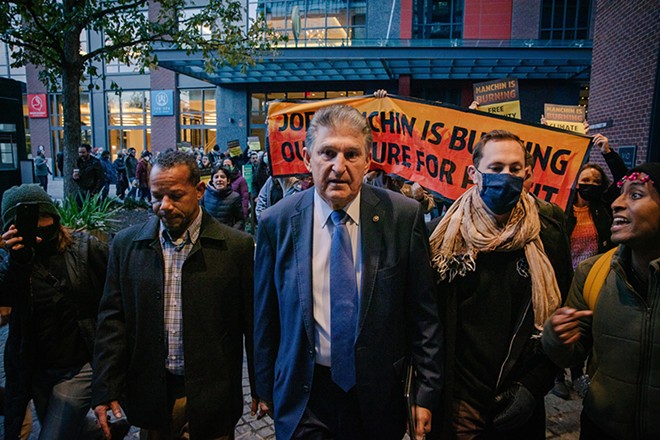 The dystopian nightmare of 2020 concluded with a glimmer of hope. Donald Trump had been defeated. COVID vaccines were on the way. The economy was showing signs of life.

That fantasy didn't last a week.

If anything, 2021 was a long, grueling extension of 2020. And by the looks of things, our democracy will likely be in even more precarious shape 52 weeks from now. (Sorry to harsh your mellow.) So for my final columns of 2021 and my first of 2022, I've compiled the 21 most important political stories of this godforsaken year, all of whose repercussions will be felt well into the future.

In Part I, we'll examine two threads: the fallout from the Big Lie and congressional Democrats' inability to match their voters' expectations.

This actually happened: The president lost his reelection bid by more than 7 million votes but declared that the election was rigged. His demonstrably false claims were trumpeted by media propagandists who spun increasingly fantastic yarns about voting machine companies and hackers and something to do with Venezuela. He pressured state officials to "find" votes for him, while his campaign lawyers and administration officials drummed up plans for the vice president to unilaterally overturn the election results.

In Congress, more than half of the president's party still voted to block Joe Biden's victory.

No Trump official has been held accountable for the attempted coup, and the only Republicans who've paid a political price were those who condemned Trump. GOP leaders who tepidly criticized Trump in the insurrection's aftermath backpedaled the second they realized the base was on his side.


The overwhelming majority of Republicans found a pretense for voting against his impeachment. Only 10 representatives and seven senators went against the party's leader. They've been viciously attacked ever since.

The Big Lie offered Republican legislatures a pretext to "protect" the "integrity" of elections — in other words, to make it harder for people of color and urbanites to vote.


More than once this year, the House of Representatives has passed legislation to protect voting rights: The For the People Act would ban gerrymandering, automatically register voters, and expand early voting. The John R. Lewis Voting Rights Advancement Act would restore key provisions of the Voting Rights Act. Both have stalled in the Senate, victims of a procedural anachronism that allows the minority party to effectively veto the majority's agenda.

The absurdity of the filibuster came into sharp relief this year, exacerbating as it did the antidemocratic nature of the U.S. Senate itself. By allowing it to remain in place, Democrats have placed themselves in a straitjacket. The results: No voting rights legislation. No immigration reform. No assault weapons ban. No law to codify abortion rights. A watered-down infrastructure bill. And because of the filibuster, Dems had to stuff most of their priorities into a massive, complicated reconciliation package that is — charitably — now on life support.

Democrats circumvented the filibuster to pass the American Rescue Plan Act, a pandemic relief bill that pumped $1.9 trillion into the economy while teasing the White House's ambitious domestic agenda, including expanded subsidies for health insurance plans under the Affordable Care Act and new child tax credits.


Studies say the child tax credits will lift as many as 4 million kids out of poverty, and the expanded Obamacare subsidies ensured that almost everyone could get a quality, low-cost health plan. Both were pitched as "emergency" measures with the wink-wink expectation that they would continue into perpetuity.

Maybe not. The child tax credits expire this month, and the health care provisions end next year. Legislation to keep them going has faltered in the Senate.

The hang-up isn't the filibuster — not directly — but rather Democrats' Manichema problem: Sens. Joe Manchin of West Virginia and Kyrsten Sinema of Arizona. One or both of them have publicly objected to the Build Back Better package's overall price tag, raising taxes on the wealthy, letting Medicare negotiate drug prices, addressing climate change, and most recently, the bill's "temporary" extension of child tax credits. (In private, Manchin — who drives a Maserati, is deeply invested in coal, and whose daughter made a fortune by gouging allergy sufferers on lifesaving EpiPens — reportedly told colleagues he thought poor people would use child tax credits to buy drugs and workers would abuse paid sick leave.)


For months, Democrats accommodated their demands, but Manchin and Sinema kept moving the goalposts. Then, on Sunday, days after presenting the White House with a compromise he said he'd support, Manchin announced on Fox News that he wouldn't vote for Build Back Better. The next morning, Goldman Sachs slashed its economic growth forecasts for the first half of 2022.

So Build Back Better is dead, at least for now — a crushing blow to progressive ambitions. But Biden did accomplish something in his first year that Trump failed to do in four: pass a bipartisan infrastructure deal. It was a big deal — if not everything the White House wanted. To win enough Republicans to overcome a filibuster, Democrats cut their original proposal in half, which meant excising most of the climate provisions.


To get House progressives on board, however, Biden promised to address the climate crisis with Build Back Better. You see how that's worked out.