The #ShoutYourAbortion movement appears to have an ally in a Detroit tagger, who recently hit a west side billboard with "ABORTIONS ARE TIGHT!!!"

The statement is scrawled beside an open-mouthed minion on an Xfinity advertisement on Grand River Avenue near West Grand Boulevard, almost as if to suggest the gleeful one-eyed creature is saying the words itself.

The spray job comes as the nation finds itself embroiled in a debate over abortion with a new vacancy on the Supreme Court. Donald Trump is hoping to replace recently retired Justice Anthony Kennedy, the court's swing voter, with the more conservative Brett Kavanaugh, who is widely believed to be willing to overturn the ruling that legalized abortion (last year, Kavanaugh reportedly praised the dissenting opinion in Roe v. Wade in a talk at a conservative Washington-based think tank). The confirmation process for Kavanaugh is just getting underway. If he's approved by the Senate, conservatives will have a solid 5-4 majority on the court.

The tagger appears to have an astute understanding of the political process. Just steps from the pro-choice spray job, it appears he or she has also tagged "STOP TRUMP!!!" And underneath, "YO... FUCK THA DUDE!!!" 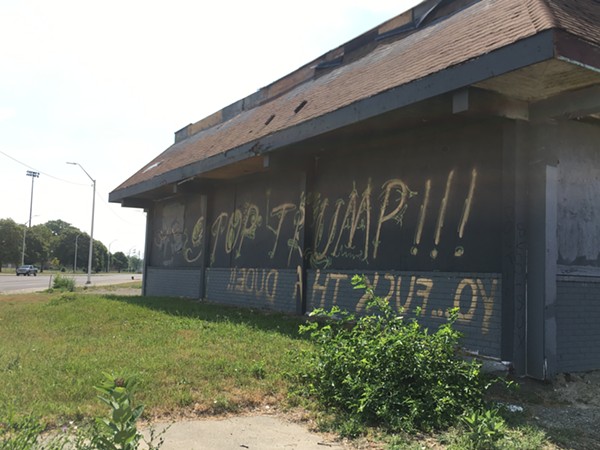 Anti-Trump graffiti can be found throughout Detroit. A roundup of some large-scale "Fuck Trump" pieces can be found here.