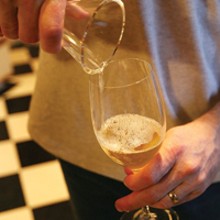 Ken Schramm wrote the book on mead. Borrowing its title from the very first how-to book written in English, The Compleat Meadmaker has sold 14,000 copies to potential home honey-wine makers since 2003 and is now in its fourth printing. He has been crusading for this historical yet little-known beverage since 1988.

What started as a simple recipe taken from the back of Charlie Papazian's The Complete Joy of Homebrewing (for "Barkshack Ginger Mead") soon turned into a passion. A passion that obliged him in 1991 to found the Mazer Cup, a national mead competition with prizes created by pottery throwers from Pewabic Pottery. A passion that compelled him in 1994 to haul 13 kegs of diversely styled mead to the American Homebrewer's Association conference in Denver, just so a small assembly of people could taste the minute differences in mead made with single-source honey or particular strains of yeast. After all that and a few articles for the brewing magazine, Zymurgy, a book was the next, natural step.

On a cool recent evening, Schramm and his wife, Jean, hosted a small dinner gathering to sample the flavors of Ken's homemade mead in their modest suburban Detroit home. Behind their house is a small-scale genuine fruit orchard. Seven trees have more than 70 varieties of apple grafted on to the branches, non-supermarket varieties like Cox's Orange Pippin. "If you've never had one you don't know how good an apple can taste off a tree," Schramm promises. Seven more tart cherry trees, two plum, two peach, four 20-foot rows of raspberries, three blackcurrant bushes and a bit of rhubarb. Many of the trees were already planted when he saw the property and he just knew he had to live here.

But it's not just about growing the fruit, Schramm explains, "Status in our society is based on your ability to convert the property around your home to the largest stretch of monoculture that you can arrange. It doesn't reward the individual at all, except to state the he has dominated his environment. If you put in perennials, fruit bearing plants and fruit trees, it's considered plebian, but it helps integrate you back into the world you live in." Needless to say, Schramm doesn't waste much time fertilizing his lawn, but he will target specific pests that can ruin the fruit.

For him, it's all about the return. Though he places a net around the cherries to save most of them from a pair of cedar waxwings, when it comes to orioles, Schramm allows them to nibble away at the raspberry crop in return for the pleasure of watching them flit around the yard from the comfort of his back porch. Come apple harvest, Schramm gathers what fruit he can't eat, give away to friends or make into pies and sauce, and heads to a local press. In a good year he can get 100 gallons of cider. Most will be sold to friends and co-workers with the proceeds going to charity. And, of course, much of the fruit is used in the mead Schramm so adores. He insists on always having mead to share.

In preparation for dinner, Schramm pulls the Indian take-out from the warming oven. Behind him, through the window, the backyard groves of dormant raspberry bushes glow auburn in the low March sun. The apple trees cast long shadows and wait for the earth to warm enough so that they can flush with buds, then blossoms and, eventually, fruit. Piles of pruned branches lay upon the frozen ground. Schramm figures he lost a couple apple varieties in the winter maintenance but none that was too important or even reachable at harvest. He spoons a helping of chicken chettinadu and laments the status of mead in today's cultural eye.

"Right now, Americans have this attitude about sweet wines with food. It seems OK to order a syrupy soda with a meal but for some reason a wine has to be dry. Until the wine and food critics are educated about mead and are willing to consider the idea of sweet wines pairing with certain meals, we are stuck with this atmosphere of peer pressure and white with fish, red with beef." Schramm cites Nicolas Day's recent article in the online magazine, Slate (see tinyurl.com/5oy8z8). "He tried to pair basic, traditional mead with a roast chicken dinner. He tried to put mead where wine should be. Of course that's not going to work. Even I would have chosen a Sauvignon Blanc or a dry Riesling for that dish."

He pours glasses of Erik the Red, a "melomel," or mead made with fruit. This particular five-gallon batch was fermented with a base of 20 pounds honey, and then topped with 15 pounds of raspberries and 12 pounds of cherries from Schramm's own back yard. It's dense with the flavors and aromas of berries and balanced with the fruit's acidity. It wholly complements the flavors of rogan josh, a north Indian lamb curry. "It's not just spicy food," Schramm says. "Any dark mead will go with big, strong cheeses; from sharp cheddar to Roquefort, dark mead is going to perform tremendously well."

Schramm pours Jean a ginger mead he has whimsically named Tina Louise after the knockout dame of Gilligan's Island fame. It's sweet, with a mild bite of spice and an agreeable nose of fresh ginger and cantaloupe. It matches nicely with chicken tikka masala. "See that?" he says, excited. "If the wine-criticism community is willing to give commercial meaderys the room to move into the niche where they belong, this is the kind of pairing we can expect."

But lack of understanding by the wine establishment is only one issue meadmakers are dealing with. Honeybees across the country are being affected by something called Colony Collapse Disorder, or CCD. CCD is a phenomenon in which worker bees unexpectedly disappear from a colony from no obvious cause. The syndrome is not well-understood though there is no lack of theories. Explanations range from pesticides to environmental change-related stresses to genetically modified (GM) crops. Nothing is conclusive.

After dinner, the group retires to the living room where Schramm grabs his guitar and fingerpicks a blues tune. He's clearly concerned about the consequences of CCD. After all, besides producing the main ingredient in mead, honeybees pollinate a third of all U.S. crop species. "It's frightening to me," he says. "I firmly believe that there's some canary-in-the-coal-mine thing going on here where the bees are showing us that something we're doing isn't right. We are the masters of unintended consequences. If CCD keeps going the way it's going, the mead industry is going to have big problems."

But apprehension hasn't entirely hit home just yet. Schramm's local honey suppliers have healthy colonies and he's already got next season's batch of mead on his mind.