Rusty, not busty, and a fresh free tune

By Metro Times music staff
click to flip through (3) 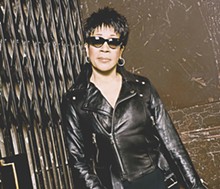 FRIGHT FROM THE BINS

Amercia's other Favorite Redhead. Any comedienne known as the "knockers up" girl demands a pickup, even if it's a rummage sale. Like an oversexed Rose Marie, Rusty Warren keeps yammering about the small chest potatoes the Lord endowed her with for fear they'll actually make the harvest smaller someday. It's a thrill to hear her sandpaper voice bellow out such showstoppers as "Grab Yourself a Handful, It's Free" and "I Like Everybody," the number where she gives the credo that carried her throughout her party record career: "I like to go through life with my knockers up/ Let my boobies bounce to the Hut! Hut! Hut!" What's sad about this adult album from 1960 — from the self-described "mother of the sexual revolution" — is they'd probably bleep "boobies" out today. I love her while others flee the room mostly because she reminds me of the saucy, loudmouthed friend your parents invited when having friends over on Saturday nights for Tom Collins mix. And unlike my parents' saucy, loudmouth friend, Rusty never tried to put her cigarette out on my toddler head. —Serene Dominic

Scott Masson, formerly of Office, says this is "About the facade of success, obsession and megalomania." Or "it could be a eulogy to an old friend or lover. It was important to send them off in style, via catchy pop song." The lady voice is former Office drummer, Erica Corniel. The Glossies' forthcoming LP, Phantom Films, is due mid-July. —Travis R. Wright