So, this is a big deal: Black Lives Matter releases list of demands 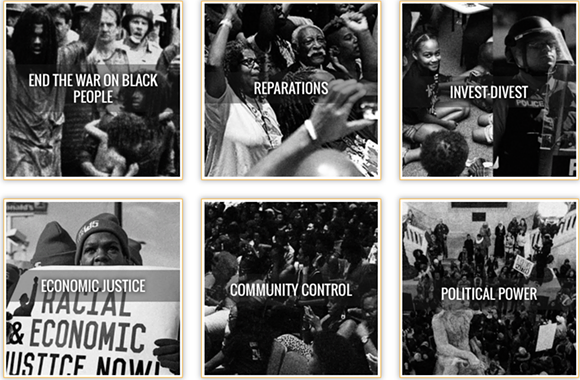 Black Lives Matter, a collective of over 50 organizations representing thousands of Black people from across the nation, released a statement Monday morning with six platform demands and proposed solutions.

While the organization, which cropped up in Ferguson, Missouri following the fatal shooting of African-American teen Michael Brown by law enforcement, has organized a number of rallies and protests over the past two years, this is the first time the organization has produced a cohesive list of policy recommendations and demands. This previous lack of tangibles was largely due to the fact that collective, for a long time, eschewed common hierarchical practices, favoring instead a decentralized approach.

The list of demands, which Thenjiwe McHarris, a member of the M4BL Policy Leadership team, told Fusion has been over a year in the making, aim to focus the collective and position it as a leader in this era's civil rights movement.

"We have created this platform to articulate and support the ambitions and work of Black people," the newly launched Black Lives Matter website states.

"We also seek to intervene in the current political climate and assert a clear vision, particularly for those who claim to be our allies, of the world we want them to help us create. We reject false solutions and believe we can achieve a complete transformation of the current systems, which place profit over people and make it impossible for many of us to breathe."

2. Reparations: We demand reparations for past and continuing harms. The government, responsible corporations and other institutions that have profited off of the harm they have inflicted on Black people — from colonialism to slavery through food and housing redlining, mass incarceration, and surveillance — must repair the harm done.

4. Economical Justice: We demand economic justice for all and a reconstruction of the economy to ensure Black communities have collective ownership, not merely access.

5. Community Control: We demand a world where those most impacted in our communities control the laws, institutions, and policies that are meant to serve us – from our schools to our local budgets, economies, police departments, and our land – while recognizing that the rights and histories of our Indigenous family must also be respected.

6. Political Powers: We demand independent Black political power and Black self-determination in all areas of society. We envision a remaking of the current U.S. political system in order to create a real democracy where Black people and all marginalized people can effectively exercise full political power.

As the team behind the news-comedy show Samantha Bee reported last week from the Republican National Convention, while a lot of #AllLivesMatter-brand conservatives have taken issue with the Black Lives Matter movement, few actually know what the group is about or what they're hoping to accomplish. This coherent list of demands and 40-policy suggestions elucidates this.

For those in Detroit who followed the July protest-vigil honoring the life of Aiyana Stanely-Jones, a seven-year old who was killed by law enforcement in 2011, the list of demands launched today are not surprising.

The Stanley-Jones protest was organized by Black Lives Matter-Detroit and BYP100 Detroit (a member of the Black Lives Matter collective). There protesters pushed for the firing of Joseph Weekley — the Detroit Police Officer who shot the child — but also a number of social reforms including the investment in black futures.

"Our public schools are being closed, water is being shut off for bills that are $600, our homes are being taken away from us," protesters announced earlier this month, flicking at some of the issues of systemic inequality they've pinpointed in Detroit.

While some of those problems may be city specific, they also fall under some of the larger demand categories Invest-Divest, Economical Justice and Community Control.

"We recognize that not all of our collective needs and visions can be translated into policy, but we understand that policy change is one of many tactics necessary to move us towards the world we envision," the website states. "We have come together now because we believe it is time to forge a new covenant. We are dreamers and doers and this platform is meant to articulate some of our vision."

"This is a really, really big deal," she writes. "By shedding its previous identity as a largely reactionary, structureless movement, Black Lives Matter seeks to definitively lead the national discussion on the safety, health, and freedom of black people. Painting the movement with a broad brush is a seismic shift. And it’s a shift that Occupy Wall Street never put in motion, a failure which many point to as the reason for the movement’s eventual dissolution. The list of demands set forth by M4BL explicitly unifies organizations across the United States—and though the goals are purposefully lofty, it’s a significant move towards harnessing the power of local groups into something bigger."