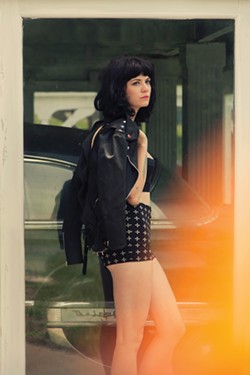 Photo by Glynis Carpenter
Born in South Carolina, singer-songwriter Nikki Lane moved to California thinking that she would be an A&R rep.

“I think I just thought I would flirt with dudes and I would have a credit card and it would be fabulous,” she laughs via phone. “I got there and started transitioning into wanting to work in design and fashion. I still didn’t know what it meant. I was a high school dropout. I just didn’t want to pay anyone to teach me anything.”

But instead of wining and dining up-and-coming bands, she started designing shoes. For five or six years after that, she tried her hand at a mix of things, including high-end retail.

“I was trying to learn how to run a successful business,” she says. “I manufactured and sold things. Being a musician now, merch has become one of my favorite past times. I’m well-equipped for what I didn’t intend to do.”

Well-equipped is right. Thanks to the success of last year's All or Nothin', Lane has quickly been crowned "The First Lady of Outlaw Country." She certainly deserves the title, even though her musical tastes are really quite eclectic.

“My mother listened to '60s and Motown music,” she says. “My dad listened '80s and '90s pop country. My grandfather was into what he called mountain music with a dulcimer. I was well-versed in different types of music. I was that kind of kid who grew up on MTV. I used to joke that MTV was my babysitter during the summers. I was the product of the radio. I wasn’t collecting records at a young age. I was focused on the outdoors and crafts more than music. It wasn’t until I moved to California that I discovered a strong personal taste in music and starting to learn records that weren’t on the radio.”

While in California, she started writing snippets of songs while driving and would hum out melodies.

“They were never developed as songs because they weren’t even fully developed thoughts,” she says. “I did have a series on cassette long before I made a record. That will probably come out some day. They’re lacking completion, but they’re fun for me to look back and reference. I can see the amount of work I’ve gotten done in the last six years.”

Lane, who’s just completed tours with Shakey Graves, Jenny Lewis, and Social Distortion, raised eyebrows last year with All or Nothin’, a terrific collection of twangy tunes produced by Black Keys’ singer-guitarist Dan Auerbach. The album made several “Best of 2014” lists when it came out last year. New West Records even released a 19-track deluxe version of the record, which includes the previously unreleased “Can’t Get Enough.”

Lane had written all of her first record, which never came out, by herself but her manager encouraged her to do some co-writing on 2011’s Walk of Shame. For All or Nothin', she did some co-writing with Auerbach. A song like “Love’s on Fire” benefits from a sparse intro that leads into a beautiful duet.

“I love the softness at the beginning before the violin and fiddle kick in,” says Lane. “We got to the end of the record and had a few days left. We were done with what we lined up. We were starting to come in at one in the afternoon and feel out some new songs. We went in that morning and tried to write something. I had been recently married to a touring musician. Dan was a touring musician. We were talking about the reality of touring and keeping it together. I was being realistic about being broke and he was daydreaming. When we wrote it, we were on the roof and it was acoustic and soft and when we went downstairs, that was natural way to showcase it to the band. There had to be a cohesiveness to it. You can’t just throw one bare bones track on it. That was fun. I like that the boys thought to do a key change. We wanted to have that moment of vulnerability and then tie it in with everything else.”

Another highlight, the rowdy “Sleep with a Stranger,” could pass as an Old 97s tune. Lane describes it as song about “getting married and getting divorced.”

“It’s the series of events that follow when you’re making and breaking relationships,” she says. “You got out and want to do something bad. You can go out and ride motorcycles with the boys. You can go to 308, or to Robert’s, or to the Crying Wolf. I picked a scenario from every one of those. It’s about walking into a cowboy and picking up a cowboy. It’s about going out and letting loose because you haven’t been able to for a long time. It’s the full range of emotions you experience when you make decisions like that.”

It comes off as the kind of song you’d stereotypically expect to hear from a guy rather than a woman.


“I hear that quite often,” says Lane. “That’s funny to me. I know just as many women that cheat and sleep around as I do men. I guess women aren’t supposed to talk about it. It’s good I get a stamp of bravery for talking about reality. I don’t not misbehave just because I’m a lady. I can be a lady too all day long. And I can break the hearts just like the rest of them. I try to do all the things the boys do better."

The deluxe version of the album features the ballad “Can’t Get Enough,” a song Lane initially thought wouldn't fit on the record.

“That was a true vulnerable moment of a love song,” she says. “I don’t write too many true love songs where I’m feeling swept away by someone. It’s easy to write a song about one person and then by the end it relates more to another person. When the record came out, I was going through a moment of insane vulnerability. I didn’t know if someone would pick up the record or if I could handle my divorce or the rebounds. I canned the most vulnerable song because I didn’t want to show any signs of weakness. It ended up being perfect. When we did the deluxe, it was something to add on. I’m glad we have those and not just the ridiculous live tracks that ended up on Spotify. I have another couple of songs that are similar to that.”

“The songs are all there and they’re just all over the place,” she says. “We have a song called '700,000 Rednecks.' It mocks my hometown and the pop country theory that you need that many fans on commercial radio. Lots of songs about distance and roads. I’m naming the record Highway Queen. Let’s be real. I deserve the title. There’s another heartbreaking love song about somebody on the other side of the country. To me it’s impossible to not be autobiographical. Most of what’s going on is related to being a touring musician and figuring out what’s next and talking about it and trying to relate to the people we meet on the road and the fans we’ve been making.”